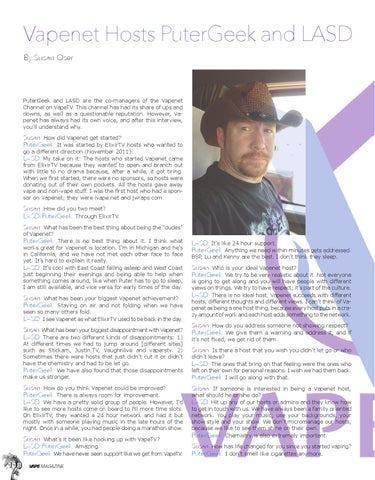 PuterGeek and LASD are the co-managers of the Vapenet Channel on VapeTV. This channel has had its share of ups and downs, as well as a questionable reputation. However, Vapenet has always had its own voice, and after this interview, you’ll understand why.

hosts who wanted to go a different direction (November 2011). LASD: My take on it: The hosts who started Vapenet came from ElixirTV because they wanted to open and branch out with little to no drama because, after a while, it got tiring. When we ﬁrst started, there were no sponsors, so hosts were donating out of their own pockets. All the hosts gave away vape and non-vape stuff. I was the ﬁrst host who had a sponsor on Vapenet; they were ivape.net and jwraps.com.

Susan: How did you two meet? LASD/PuterGeek: Through ElixirTV. Susan: What has been the best thing about being the “dudes” of Vapenet? PuterGeek: There is no best thing about it. I think what works great for Vapenet is location. I’m in Michigan and he’s in California, and we have not met each other face to face yet. It’s hard to explain it really. LASD: It’s cool with East Coast falling asleep and West Coast just beginning their evenings and being able to help when something comes around, like when Puter has to go to sleep, I am still available, and vice versa for early times of the day. Susan: What has been your biggest Vapenet achievement? PuterGeek: Staying on air and not folding when we have

seen so many others fold. LASD: I see Vapenet as what ElixirTV used to be back in the day.

At different times we had to jump around [different sites] such as Stickam, Justin.TV, Vaughnlive and vaperstv. 2) Sometimes there were hosts that just didn’t cut it or didn’t have the chemistry and had to be let go. PuterGeek: We have also found that those disappointments make us stronger.

Susan: How do you think Vapenet could be improved? PuterGeek: There is always room for improvement. LASD: We have a pretty solid group of people. However,

I’d like to see more hosts come on board to ﬁll more time slots. On ElixirTV, they wanted a 24 hour network and had it but mostly with someone playing music in the late hours of the night. Once in a while, you had people doing a marathon show.

Susan: What’s it been like hooking up with VapeTV? LASD/PuterGeek: Amazing. PuterGeek: We have never seen support like we get from VapeTV. 118

LASD: It’s like 24 hour support. PuterGeek: Anything we need within minutes gets addressed. BSP, Lu and Kenny are the best. I don’t think they sleep.

Susan: Who is your ideal Vapenet host? PuterGeek: We try to be very realistic about it. Not everyone

is going to get along and you will have people with different views on things. We try to have respect; it’s part of the culture. LASD: There is no ideal host. Vapenet succeeds with different hosts, different thoughts and different views. I can’t think of Vapenet as being a one host thing, because every host puts in a crazy amount of work and each host adds something to the network.

Susan: How do you address someone not showing respect? PuterGeek: We give them a warning and address it, and if

it’s not ﬁxed, we get rid of them.

Susan: Is there a host that you wish you didn’t let go or who didn’t leave? LASD: The ones that bring on that feeling were the ones who left on their own for personal reasons. I wish we had them back. PuterGeek: I will go along with that. Susan:

If someone is interested in being a Vapenet host, what should he or she do? LASD: Hit up any of our hosts or admins and they know how to get in touch with us. We have always been a family oriented network. You play your music; use your backgrounds, your show style and your show. We don’t micromanage our hosts, because we like to see them shine on their own. PuterGeek: Chemistry is also extremely important.

Susan: How has life changed for you since you started vaping? PuterGeek: I don’t smell like cigarettes anymore.