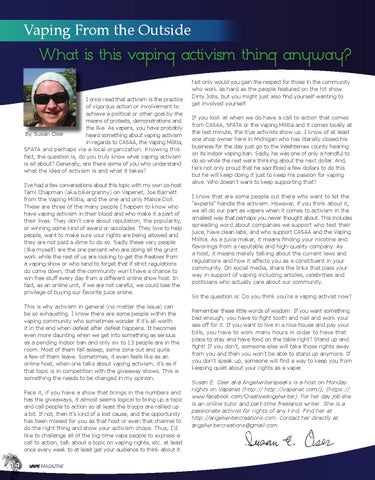 Vaping From the Outside

What is this vaping activism thing anyway? I once read that activism is the practice of vigorous action or involvement to achieve a political or other goal by the means of protests, demonstrations and the like. As vapers, you have probably By Susan Oser heard something about vaping activism in regards to CASAA, the Vaping Militia, SFATA and perhaps via a local organization. Knowing this fact, the question is, do you truly know what vaping activism is all about? Generally, are there some of you who understand what the idea of activism is and what it takes? I’ve had a few conversations about this topic with my own co-host Tami Chapman (aka bikergranny) on Vapenet, Joe Barnett from the Vaping Militia, and the one and only Malice Doll. These are three of the many people I happen to know who have vaping activism in their blood and who make it a part of their lives. They don’t care about reputation, the popularity, or winning some kind of award or accolades. They love to help people, want to make sure your rights are being allowed and they are not paid a dime to do so. Sadly these very people (like myself) are the one percent who are doing all the grunt work while the rest of us are looking to get the freebies from a vaping show or who tend to forget that if strict regulations do come down, that the community won’t have a chance to win free stuff every day from a different online show host. In fact, as an online unit, if we are not careful, we could lose the privilege of buying our favorite juice online. This is why activism in general (no matter the issue) can be so exhausting. I know there are some people within the vaping community who sometimes wonder if it’s all worth it in the end when defeat after defeat happens. It becomes even more daunting when we get into something as serious as a pending indoor ban and only six to 13 people are in the room. Most of them fall asleep, some zone out and quite a few of them leave. Sometimes, it even feels like as an online host, when one talks about vaping activism, it’s as if that topic is in competition with the giveaway shows. This is something the needs to be changed in my opinion. Face it, if you have a show that brings in the numbers and has the giveaways, it almost seems logical to bring up a topic and call people to action so at least the troops are rallied up a bit. If not, then it’s kind of a lost cause, and the opportunity has been missed for you as that host or even that channel to do the right thing and show your activism chops. Thus, I’d like to challenge all of the big-time vape people to express a call to action, talk about a topic on vaping rights, etc. at least once every week to at least get your audience to think about it.

Not only would you gain the respect for those in the community who work as hard as the people featured on the hit show Dirty Jobs, but you might just also find yourself wanting to get involved yourself. If you look at when we do have a call to action that comes from CASAA, SFATA or the Vaping Militia and it comes locally at the last minute, the true activists show up. I know of at least one shop owner here in Michigan who has literally closed his business for the day just go to the Washtenaw county hearing on its indoor vaping ban. Sadly, he was one of only a handful to do so while the rest were thinking about the next dollar. And, he’s not only proud that he sacrificed a few dollars to do this but he will keep doing it just to keep his passion for vaping alive. Who doesn’t want to keep supporting that? I know that are some people out there who want to let the “experts” handle the activism. However, if you think about it, we all do our part as vapers when it comes to activism in the smallest way that perhaps you never thought about. This includes spreading word about companies we support who test their juice, have clean labs, and who support CASAA and the Vaping Militia. As a juice maker, it means finding your nicotine and flavorings from a reputable and high-quality company. As a host, it means merely talking about the current laws and regulations and how it affects you as a constituent in your community. On social media, share the links that pass your way in support of vaping including articles, celebrities and politicians who actually care about our community. So the question is: Do you think you’re a vaping activist now? Remember these little words of wisdom: If you want something bad enough, you have to fight tooth and nail and work your ass off for it. If you want to live in a nice house and pay your bills, you have to work many hours in order to have that place to stay and have food on the table right? Stand up and fight! If you don’t, someone else will take those rights away from you and then you won’t be able to stand up anymore. If you don’t speak up, someone will find a way to keep you from keeping quiet about your rights as a vaper. Susan E. Oser aka Angelwriterspeaks is a host on Monday nights on Vapenet (http:// http://vapenet.com/); (https:// www.facebook.com/CreativeAngelwriter). For her day job she is an online tutor and part-time freelance writer. She is a passionate activist for rights of any kind. Find her at http://angelwritercreations.com. Contact her directly at angelwritercreations@gmail.com.