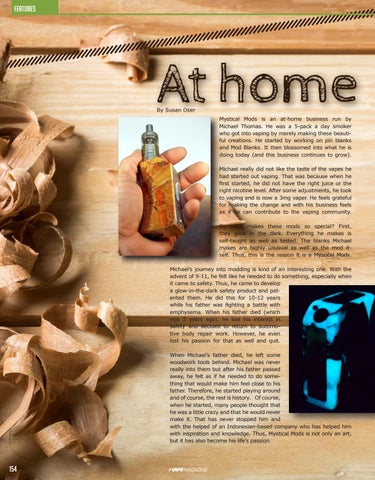 At home By Susan Oser

Mystical Mods is an at-home business run by Michael Thomas. He was a 5-pack a day smoker who got into vaping by merely making these beautiful creations. He started by working on pin blanks and Mod Blanks. It then blossomed into what he is doing today (and this business continues to grow). Michael really did not like the taste of the vapes he had started out vaping. That was because when he first started, he did not have the right juice or the right nicotine level. After some adjustments, he took to vaping and is now a 3mg vaper. He feels grateful for making the change and with his business feels as if he can contribute to the vaping community. So what makes these mods so special? First, they glow in the dark. Everything he makes is self-taught as well as tested. The blanks Michael makes are highly unusual as well as the mod itself. Thus, this is the reason it is a Mystical Mods.

Michaelâ&amp;#x20AC;&amp;#x2122;s journey into modding is kind of an interesting one. With the advent of 9-11, he felt like he needed to do something, especially when it came to safety. Thus, he came to develop a glow-in-the-dark safety product and patented them. He did this for 10-12 years while his father was fighting a battle with emphysema. When his father died (which was 3 years ago), he lost his interest in safety and decided to return to automotive body repair work. However, he even lost his passion for that as well and quit. When Michaelâ&amp;#x20AC;&amp;#x2122;s father died, he left some woodwork tools behind. Michael was never really into them but after his father passed away, he felt as if he needed to do something that would make him feel close to his father. Therefore, he started playing around and of course, the rest is history. Of course, when he started, many people thought that he was a little crazy and that he would never make it. That has never stopped him and with the helped of an Indonesian-based company who has helped him with inspiration and knowledge. Thus, Mystical Mods is not only an art, but it has also become his lifeâ&amp;#x20AC;&amp;#x2122;s passion.