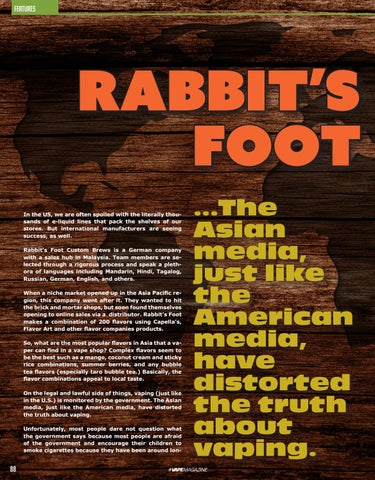 Rabbit’s Foot In the US, we are often spoiled with the literally thousands of e-liquid lines that pack the shelves of our stores. But international manufacturers are seeing success, as well. Rabbit’s Foot Custom Brews is a German company with a sales hub in Malaysia. Team members are selected through a rigorous process and speak a plethora of languages including Mandarin, Hindi, Tagalog, Russian, German, English, and others. When a niche market opened up in the Asia Pacific region, this company went after it. They wanted to hit the brick and mortar shops, but soon found themselves opening to online sales via a distributor. Rabbit’s Foot makes a combination of 200 flavors using Capella’s, Flavor Art and other flavor companies products. So, what are the most popular flavors in Asia that a vaper can find in a vape shop? Complex flavors seem to be the best such as a mango, coconut cream and sticky rice combinations, summer berries, and any bubble tea flavors (especially taro bubble tea.) Basically, the flavor combinations appeal to local taste. On the legal and lawful side of things, vaping (just like in the U.S.) is monitored by the government. The Asian media, just like the American media, have distorted the truth about vaping. Unfortunately, most people dare not question what the government says because most people are afraid of the government and encourage their children to smoke cigarettes because they have been around lon-

...The Asian media, just like the American media, have distorted the truth about vaping.