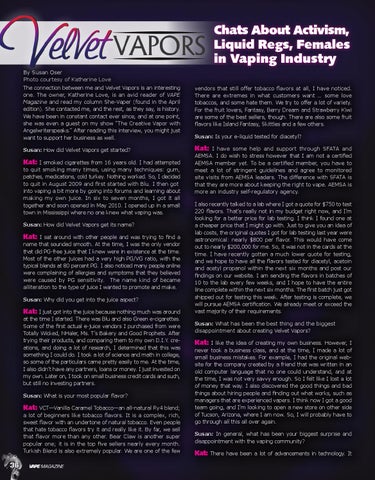 Chats About Activism, Liquid Regs, Females in Vaping Industry By Susan Oser Photo courtesy of Katherine Love The connection between me and Velvet Vapors is an interesting one. The owner, Katherine Love, is an avid reader of VAPE Magazine and read my column She-Vaper (found in the April edition). She contacted me, and the rest, as they say, is history. We have been in constant contact ever since, and at one point, she was even a guest on my show “The Creative Vapor with Angelwriterspeaks.” After reading this interview, you might just want to support her business as well.

vendors that still offer tobacco flavors at all, I have noticed. There are extremes in what customers want … some love tobaccos, and some hate them. We try to offer a lot of variety. For the fruit lovers, Fantasy, Berry Dream and Strawberry Kiwi are some of the best sellers, though. There are also some fruit flavors like Island Fantasy, Skittles and a few others.

Susan: How did Velvet Vapors get started?

I smoked cigarettes from 16 years old. I had attempted to quit smoking many times, using many techniques: gum, patches, medications, cold turkey. Nothing worked. So, I decided to quit in August 2009 and first started with Blu. I then got into vaping a bit more by going into forums and learning about making my own juice. In six to seven months, I got it all together and soon opened in May 2010. I opened up in a small town in Mississippi where no one knew what vaping was. Susan: How did Velvet Vapors get its name?

I sat around with other people and was trying to find a name that sounded smooth. At the time, I was the only vendor that did PG-free juice that I knew were in existence at the time. Most of the other juices had a very high PG/VG ratio, with the typical blends at 80 percent PG. I also noticed many people online were complaining of allergies and symptoms that they believed were caused by PG sensitivity. The name kind of became alliteration to the type of juice I wanted to promote and make. Susan: Why did you get into the juice aspect?

Kat: I just got into the juice because nothing much was around at the time I started. There was Blu and also Green e-cigarettes. Some of the first actual e-juice vendors I purchased from were Totally Wicked, NHaler, Ms. T’s Bakery and Good Prophets. After trying their products, and comparing them to my own D.I.Y. creations, and doing a lot of research, I determined that this was something I could do. I took a lot of science and math in college, so some of the particulars came pretty easily to me. At the time, I also didn’t have any partners, loans or money. I just invested on my own. Later on, I took on small business credit cards and such, but still no investing partners. Susan: What is your most popular flavor?

Kat: VCT—Vanilla Caramel Tobacco—an all-natural Ry4 blend; a lot of beginners like tobacco flavors. It is a complex, rich, sweet flavor with an undertone of natural tobacco. Even people that hate tobacco flavors try it and really like it. By far, we sell that flavor more than any other. Bear Claw is another super popular one; it is in the top five sellers nearly every month. Turkish Blend is also extremely popular. We are one of the few

Susan: Is your e-liquid tested for diacetyl? I have some help and support through SFATA and AEMSA. I do wish to stress however that I am not a certified AEMSA member yet. To be a certified member, you have to meet a lot of stringent guidelines and agree to monitored site visits from AEMSA leaders. The difference with SFATA is that they are more about keeping the right to vape. AEMSA is more an industry self-regulatory agency. I also recently talked to a lab where I got a quote for $750 to test 220 flavors. That’s really not in my budget right now, and I’m looking for a better price for lab testing. I think I found one at a cheaper price that I might go with. Just to give you an idea of lab costs, the original quotes I got for lab testing last year were astronomical: nearly $800 per flavor. This would have come out to nearly $200,000 for me. So, it was not in the cards at the time. I have recently gotten a much lower quote for testing, and we hope to have all the flavors tested for diacetyl, acetoin and acetyl propanol within the next six months and post our findings on our website. I am sending the flavors in batches of 10 to the lab every few weeks, and I hope to have the entire line complete within the next six months. The first batch just got shipped out for testing this week. After testing is complete, we will pursue AEMSA certification. We already meet or exceed the vast majority of their requirements. Susan: What has been the best thing and the biggest disappointment about creating Velvet Vapors?

I like the idea of creating my own business. However, I never took a business class, and at the time, I made a lot of small business mistakes. For example, I had the original website for the company created by a friend that was written in an old computer language that no one could understand, and at the time, I was not very savvy enough. So I felt like I lost a lot of money that way. I also discovered the good things and bad things about hiring people and finding out what works, such as managers that are experienced vapers. I think now I got a good team going, and I’m looking to open a new store on other side of Tucson, Arizona, where I am now. So, I will probably have to go through all this all over again. Susan: In general, what has been your biggest surprise and disappointment with the vaping community?

There have been a lot of advancements in technology. It