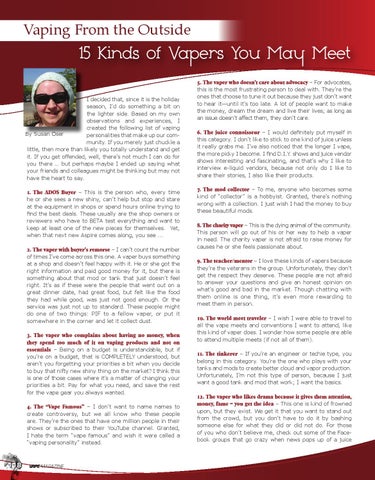 Vaping From the Outside

15 Kinds of Vapers You May Meet

I decided that, since it is the holiday season, I’d do something a bit on the lighter side. Based on my own observations and experiences, I created the following list of vaping By Susan Oser personalities that make up our community. If you merely just chuckle a little, then more than likely you totally understand and get it. If you get offended, well, there’s not much I can do for you there … but perhaps maybe I ended up saying what your friends and colleagues might be thinking but may not have the heart to say. 1. The ADOS Buyer – This is the person who, every time he or she sees a new shiny, can’t help but stop and stare at the equipment in shops or spend hours online trying to find the best deals. These usually are the shop owners or reviewers who have to BETA test everything and want to keep at least one of the new pieces for themselves. Yet, when that next new Aspire comes along, you see ... 2. The vaper with buyer’s remorse – I can’t count the number of times I’ve come across this one. A vaper buys something at a shop and doesn’t feel happy with it. He or she got the right information and paid good money for it, but there is something about that mod or tank that just doesn’t feel right. It’s as if these were the people that went out on a great dinner date, had great food, but felt like the food they had while good, was just not good enough. Or the service was just not up to standard. These people might do one of two things: PIF to a fellow vaper, or put it somewhere in the corner and let it collect dust. 3. The vaper who complains about having no money, when they spend too much of it on vaping products and not on essentials – Being on a budget is understandable, but if you’re on a budget, that is COMPLETELY understood, but aren’t you forgetting your priorities a bit when you decide to buy that nifty new shiny thing on the market? I think this is one of those cases where it’s a matter of changing your priorities a bit. Pay for what you need, and save the rest for the vape gear you always wanted. 4. The “Vape Famous” – I don’t want to name names to create controversy, but we all know who these people are. They’re the ones that have one million people in their shows or subscribed to their YouTube channel. Granted, I hate the term “vape famous” and wish it were called a “vaping personality” instead.

5. The vaper who doesn’t care about advocacy – For advocates, this is the most frustrating person to deal with. They’re the ones that choose to tune it out because they just don’t want to hear it—until it’s too late. A lot of people want to make the money, dream the dream and live their lives; as long as an issue doesn’t affect them, they don’t care. 6. The juice connoisseur – I would definitely put myself in this category. I don’t like to stick to one kind of juice unless it really grabs me. I’ve also noticed that the longer I vape, the more picky I become. I find D.I.Y. shows and juice vendor shows interesting and fascinating, and that’s why I like to interview e-liquid vendors, because not only do I like to share their stories, I also like their products. 7. The mod collector – To me, anyone who becomes some kind of “collector” is a hobbyist. Granted, there’s nothing wrong with a collection. I just wish I had the money to buy these beautiful mods. 8. The charity vaper – This is the dying animal of the community. This person will go out of his or her way to help a vaper in need. The charity vaper is not afraid to raise money for causes he or she feels passionate about. 9. The teacher/mentor – I love these kinds of vapers because they’re the veterans in the group. Unfortunately, they don’t get the respect they deserve. These people are not afraid to answer your questions and give an honest opinion on what’s good and bad in the market. Though chatting with them online is one thing, it’s even more rewarding to meet them in person. 10. The world meet traveler – I wish I were able to travel to all the vape meets and conventions I want to attend, like this kind of vaper does. I wonder how some people are able to attend multiple meets (if not all of them). 11. The tinkerer – If you’re an engineer or techie type, you belong in this category. You’re the one who plays with your tanks and mods to create better cloud and vapor production. Unfortunately, I’m not this type of person, because I just want a good tank and mod that work; I want the basics. 12. The vaper who likes drama because it gives them attention, money, fame — you get the idea – This one is kind of frowned upon, but they exist. We get it that you want to stand out from the crowd, but you don’t have to do it by bashing someone else for what they did or did not do. For those of you who don’t believe me, check out some of the Facebook groups that go crazy when news pops up of a juice