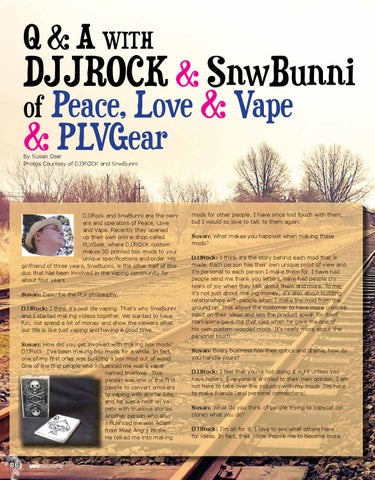 DJJRock and SnwBunni are the owners and operators of Peace, Love and Vape. Recently they opened up their own online shop called PLVGear, where DJJROCK custom makes 3D printed box mods to your unique specifications and order. His girlfriend of three years, SnwBunni, is the other half of this duo that has been involved in the vaping community for about four years. Susan: Describe the PLV philosophy. DJJRock: I think it’s real life vaping. That’s why SnwBunni and I started making videos together. We wanted to have fun, not spend a lot of money and show the viewers what our life is like just vaping and having a good time. Susan: How did you get involved with making box mods? DJJRock: I’ve been making box mods for a while. In fact, one of my first ones was building a box mod out of wood. One of the first people who influenced me was a vaper named truelove. This person was one of the first people to convert smokers to vaping with starter kits, and he was a host on vapetv with truelove stories. Another person who also influenced me was Adam from Most Angry Pirate. He talked me into making

mods for other people. I have since lost touch with them, but I would so love to talk to them again. Susan: What makes you happiest when making these mods? DJJRock: I think it’s the story behind each mod that is made. Each person has their own unique point of view and it’s personal to each person I make them for. I have had people send me thank you letters, have had people cry tears of joy when they talk about them and more. To me, it’s not just about making money; it’s also about building relationships with people when I make the mod from the ground up. This allows the customer to have more creative input on their ideas and lets the product speak for itself. Markspens gave me that idea when he gave me one of his own custom-wooded mods. It’s really more about the personal touch. Susan: Every business has their critics and drama, how do you handle yours? DJJRock: I feel that you’re not doing it right unless you have haters. Everyone is entitled to their own opinion. I am not here to take over the industry with my mods. I’m here to make friends (and personal connections). Susan: What do you think of people trying to copycat (or clone) what you do? DJJRock: I’m all for it. I love to see what others have for ideas. In fact, their ideas inspire me to become more