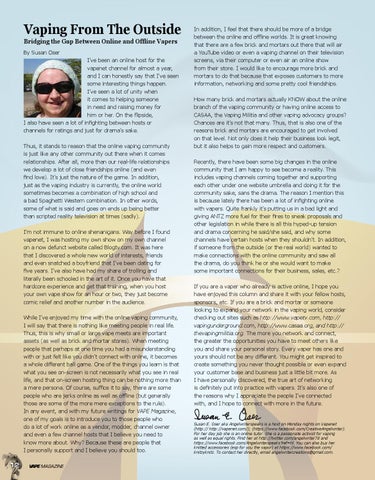 Vaping From The Outside Bridging the Gap Between Online and Offline Vapers By Susan Oser I’ve been an online host for the vapenet channel for almost a year, and I can honestly say that I’ve seen some interesting things happen. I’ve seen a lot of unity when it comes to helping someone in need and raising money for him or her. On the flipside, I also have seen a lot of infighting between hosts or channels for ratings and just for drama’s sake. Thus, it stands to reason that the online vaping community is just like any other community out there when it comes relationships. After all, more than our real-life relationships we develop a lot of close friendships online (and even find love). It’s just the nature of the game. In addition, just as the vaping industry is currently, the online world sometimes becomes a combination of high school and a bad Spaghetti Western combination. In other words, some of what is said and goes on ends up being better than scripted reality television at times (sadly). I’m not immune to online shenanigans. Way before I found vapenet, I was hosting my own show on my own channel on a now defunct website called Blogtv.com. It was here that I discovered a whole new world of interests, friends and even snatched a boyfriend that I’ve been dating for five years. I’ve also have had my share of trolling and literally been schooled in the art of it. Once you have that hardcore experience and get that training, when you host your own vape show for an hour or two, they just become comic relief and another number in the audience. While I’ve enjoyed my time with the online vaping community, I will say that there is nothing like meeting people in real life. Thus, this is why small or large vape meets are important assets (as well as brick and mortar stores). When meeting people that perhaps at one time you had a misunderstanding with or just felt like you didn’t connect with online, it becomes a whole different ball game. One of the things you learn is that what you see on-screen is not necessarily what you see in real life, and that on-screen hosting thing can be nothing more than a mere persona. Of course, suffice it to say, there are some people who are jerks online as well as offline (but generally those are some of the more mere exceptions to the rule). In any event, and with my future writings for VAPE Magazine, one of my goals is to introduce you to those people who do a lot of work online as a vendor, modder, channel owner and even a few channel hosts that I believe you need to know more about. Why? Because these are people that I personally support and I believe you should too.

In addition, I feel that there should be more of a bridge between the online and offline worlds. It is great knowing that there are a few brick and mortars out there that will air a YouTube video or even a vaping channel on their television screens, via their computer or even air an online show from their store. I would like to encourage more brick and mortars to do that because that exposes customers to more information, networking and some pretty cool friendships. How many brick and mortars actually KNOW about the online branch of the vaping community or having online access to CASAA, the Vaping Militia and other vaping advocacy groups? Chances are it’s not that many. Thus, that is also one of the reasons brick and mortars are encouraged to get involved on that level. Not only does it help their business look legit, but it also helps to gain more respect and customers. Recently, there have been some big changes in the online community that I am happy to see become a reality. This includes vaping channels coming together and supporting each other under one website umbrella and doing it for the community sake, sans the drama. The reason I mention this is because lately there has been a lot of infighting online with vapers. Quite frankly it’s putting us in a bad light and giving ANTZ more fuel for their fires to sneak proposals and other legislation in while there is all this hyped-up tension and drama concerning he said/she said, and why some channels have certain hosts when they shouldn’t. In addition, if someone from the outside (or the real world) wanted to make connections with the online community and saw all the drama, do you think he or she would want to make some important connections for their business, sales, etc.? If you are a vaper who already is active online, I hope you have enjoyed this column and share it with your fellow hosts, sponsors, etc. If you are a brick and mortar or someone looking to expand your network in the vaping world, consider checking out sites such as http://www.vapetv.com, http:// vapingunderground.com, http://www.casaa.org, and http:// thevapingmilitia.org. The more you network and connect, the greater the opportunities you have to meet others like you and share your personal story. Every vaper has one and yours should not be any different. You might get inspired to create something you never thought possible or even expand your customer base and business just a little bit more. As I have personally discovered, the true art of networking is definitely put into practice with vapers. It’s also one of the reasons why I appreciate the people I’ve connected with, and I hope to connect with more in the future.