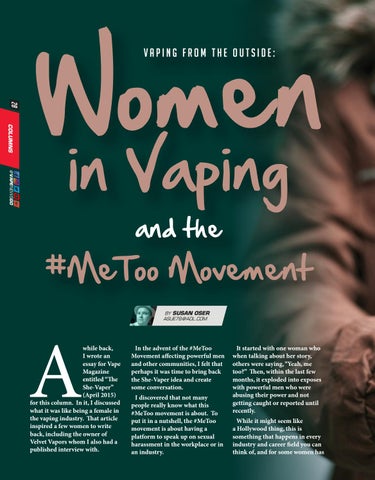 Women Vaping from the Outside:

in Vaping and the

while back, I wrote an essay for Vape Magazine entitled “The She-Vaper” (April 2015) for this column. In it, I discussed what it was like being a female in the vaping industry. That article inspired a few women to write back, including the owner of Velvet Vapors whom I also had a published interview with.

In the advent of the #MeToo Movement affecting powerful men and other communities, I felt that perhaps it was time to bring back the She-Vaper idea and create some conversation. I discovered that not many people really know what this #MeToo movement is about. To put it in a nutshell, the #MeToo movement is about having a platform to speak up on sexual harassment in the workplace or in an industry.

It started with one woman who when talking about her story, others were saying, “Yeah, me too?” Then, within the last few months, it exploded into exposes with powerful men who were abusing their power and not getting caught or reported until recently. While it might seem like a Hollywood thing, this is something that happens in every industry and career field you can think of, and for some women has