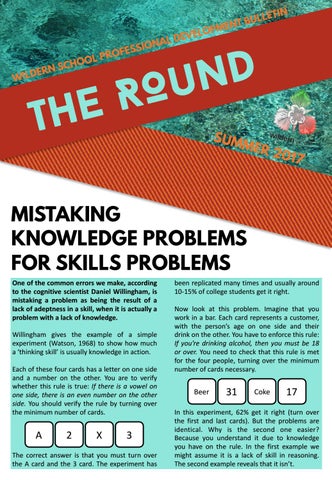 MISTAKING KNOWLEDGE PROBLEMS FOR SKILLS PROBLEMS One of the common errors we make, according to the cognitive scientist Daniel Willingham, is mistaking a problem as being the result of a lack of adeptness in a skill, when it is actually a problem with a lack of knowledge. Willingham gives the example of a simple experiment (Watson, 1968) to show how much a ‘thinking skill’ is usually knowledge in action. Each of these four cards has a letter on one side and a number on the other. You are to verify whether this rule is true: If there is a vowel on one side, there is an even number on the other side. You should verify the rule by turning over the minimum number of cards.

The correct answer is that you must turn over the A card and the 3 card. The experiment has

been replicated many times and usually around 10-15% of college students get it right. Now look at this problem. Imagine that you work in a bar. Each card represents a customer, with the person’s age on one side and their drink on the other. You have to enforce this rule: If you’re drinking alcohol, then you must be 18 or over. You need to check that this rule is met for the four people, turning over the minimum number of cards necessary.

In this experiment, 62% get it right (turn over the first and last cards). But the problems are identical. Why is the second one easier? Because you understand it due to knowledge you have on the rule. In the first example we might assume it is a lack of skill in reasoning. The second example reveals that it isn’t.

The idea of ‘threshold concepts’ are a really useful way to look at curriculum in your subject.

and they are troublesome, in that they are difficult to grasp or perhaps go against previous intuitions.

They were defined by Jan Meyer and Ray Land in their 2003 paper, ‘Threshold Concepts and Troublesome Knowledge: linkages to ways of thinking and practising within the disciplines’ – you could look at them as the ‘big ideas’ in each subject discipline.

Once pupils have grasped a threshold concept, subsequent learning may actually feel more intuitive or easier, due to the integrative or transformative nature of them, as well as having acquired an extended and improved use of language.

Meyer and Land write: “A threshold concept can be considered as akin to a portal, opening up a new and previously inaccessible way of thinking about something. It represents a transformed way of understanding or interpreting, or viewing something without which the learner cannot progress.” Meyer and Land suggest that threshold concepts have five characteristics: they are transformative, in that they change the way a pupil thinks about a subject; they are irreversible, in that they are difficult to unlearn once mastered; they are integrative, in that they help to unify interrelated aspects of a subject that were hidden to pupils before; they are bounded, in that pupils are breaking through a frontier to a new place of understanding;

integrative A threshold concept is likely to be

Once understood, a threshold concept will potentially change the way that a pupil sees the subject and themself in relation to the subject – ’we are what we know’. Once a pupil understands the threshold concept, they alter the way they approach other things within the domain. In the example of the cook understanding heat transfer (opposite page), this might mean that they begin to look at things like the pots and pans selected by the chef when watching a TV cookery programme, rather than simply the ingredients and method. As such, understanding a threshold concept can mark an initiation into the culture of a subject.

A threshold concept is possibly often

A threshold concept will often (though not necessarily always) be bounded in the sense that there is a kind of border between concepts. This might be something as simple as the boundary between disciplines (e.g., the boundary between Cultural Studies and English Literature) and it can often be illustrated by the use of specialist terminology that acquires a meaning in one subject that clashes with everyday usage. For example, the word ‘deprecate’ is commonly used negatively in common usage, but in Computer Science, it simply means to let an aspect of programming gently withering away.

Mastery of a threshold concept often allows the learner to make connections that were hidden to them before: it exposes the previously hidden interrelatedness of aspects of a subject. You can think of threshold concepts as pieces of a jigsaw that integrate – when you add a particular jigsaw piece it may bring other pieces together to provide a new and meaningful perspective.

A threshold concept is probably

Once understood, a threshold concept is something that a pupil is unlikely to forget. Something teachers sometimes find difficult is being able to recall back to the point when we didn’t understand the threshold concept. This is sometimes referred to as the curse of knowledge: we make assumptions that novices can think in the same way as us. Once we have passed through the threshold, it’s difficult to see how it wasn’t possible not to have understood before.

A threshold concept is potentially

A threshold concept is likely to involve ‘troublesome knowledge’ – ‘that which appears counter-intuitive, alien (emanating from another culture or discourse), or seemingly incoherent’ (Perkins, 1999). Mastery of a threshold concept can actually be inhibited by a intuitive, common-sense response to it. For example, pupils studying statistics might look at it as a branch of mathematics, so look at it through a mathematical lens. If they were able to look at it through a statistical lens, they would make a better sense of the concepts. The difficulty is in getting pupils to reverse these intuitive understandings.

‘You Still Need Your Brain’ by Daniel Willingham. In this New York Times article, cognitive psychologist Willingham explains why Google is not an adequate replacement for memory. ‘How to Use Retrieval Practice to Improve Learning’ is a guide written by cognitive scientists from Washington University in St. Louis: “When we think about learning, we typically focus on getting information into students’ heads… ‘Retrieval practice’ is where we focus on getting information out.” ‘Weekly Digest #3: How Teachers Implement Interleaving In Their Curriculum’ is a collection of blogs on interleaving, showing how various teachers have designed curriculums with opportunities for restudy and/or practice quizzing of previous weeks’ topics. If you want to know a little bit more about any of the ideas in this edition, please don’t hesitate to email me – j.theobald@wildern.hants.sch.uk - or come and find me in Block 9! James