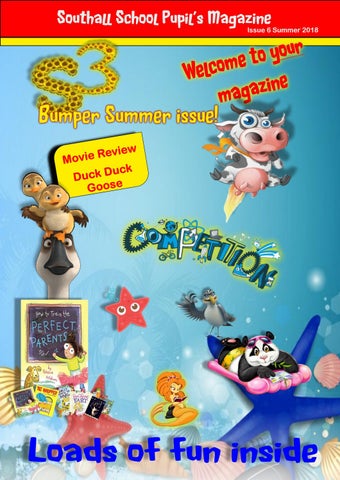 Loads of fun inside

Welcome to the fsixth edition of your very own school magazine. I hope you enjoy exploring the pages and doing the activities. If you would like to be part of the next issue , pop along and chat to Mrs Norman. See you soon

I’m a celebrity! Find out about what Rebecca Ashdown is really like?

How do teddy bears keep their den cool in summer? They use bear conditioning! What do frogs like to drink on a hot summer day? Croak-o-cola. What does the sun drink out of? Sunglasses. How do bees get to school? By school buzz! What do you call a witch who lives on the beach? A sandwitch!

What do you get when you combine an elephant with a fish? Swimming trunks!

What do you call a snowman in July? A puddle!

If you have a joke that you want to share for the next issue write it down and give it to Mrs Norman.

He thinks he's better than everyone else and spends his time attempting crazy stunts at even crazier speeds. In one such stunt, Peng flies too near the ground, hits a flock of ducklings and separates brother and sister, Chao and Chi, from the rest.

In this unlikely meeting, Peng will begin a journey that will break his wing and nearly break his heart as he grows to understand the power of unconditional love in the form of two ducklings, who likewise grow to see him as the best father they could ever have.

If you have a movie review that you want to share for the next issue write it down and give it to Mrs Norman.

Missing letters Fill in the blanks with the correct letter

I’m an internationally publish ed author and illustrator I grew up on the so uth coast of England, where I spent most of my childhood running wild, drawing and wr iting or lost in the pages of a book. Things have n’t changed much since.

Where do you live now? Stroud in Gloucestershire

Play our Summer board game

Meet Mimi Lee, an expert parent trainer. She knows that parents don’t understand what kids want and need, but you can’t blame them, as they’ve never been trained. So just follow her three simple steps to help train your parents, too!

Sometimes, Mimi’s parents don’t seem to get the hang of all that training, but Mimi knows her rigorous routine of strict discipline has worked when her parents finally agree to get her a puppy… Suddenly the roles are reversed, and Mimi has to learn that being trained is sometimes very hard work.

Fun Facts About the Months of Summer

July was named by Marc Antony in honour of Julius Caesar.

The Eiffel Tower is 6 inches tall summer th er in the an in the w inter In the sum me r h e a t , th Eiffel Tow er expand e iron in France’s s, grow mor e than 6 in making the tower ches. Frisbees, invented in the 1870’s as a pie plate, but in the 1940’s, college students began throwing them around. They have since stopped being used for pie plates and are now a summertime sport. est summer b s r’ e m m u s f o one Watermelon is lons are not e rm te a w t a th kn o w long treats. Did you stead? They be in le b ta e g e v a . a fruit, but y of vegetables il m fa r e b m u c u to the c

Find the numbers to find which colour to use.

The 12 egg egg carton is ideal for a boat, as it has a raised bit right in the middle of it – perfect for a mast. Whilst he 6 egg egg carton, has a dip in the middle and the mast is a little wobblier. just poke the stick through, put blue tack underneath and add some precautionary glue. The ribbon/ string helps secure the mast – tie it around round the top,thread it through little holes on the side and tied them again underneath.

Once dry, cut out some sails and flags. Glue on the sails and staple on the flags. Using clothes pegs to help keep things in place.

FINISHED! And ready for play!

Southyâ&#x20AC;&#x2122;s Strange News With climate change and overfishing wreaking havoc on our oceans, it is becoming increasingly important for researchers to closely monitor our marine life.

However, observing sea creatures up close is almost impossible since human presence scares the animals. Now, thanks to The Soft Robotic Fish, aka SoFi, researchers may not only be able to keep a close eye on the elusive creatures, but also uncover undersea secrets that have been eluding us for centuries.

During test dives in Fijiâ&#x20AC;&#x2122;s Rainbow Reef, SoFi glided alongside the unsuspecting marine life at depths of 50 feet for up to 40 minutes at a time, capturing high-resolution photos and videos. Even more important, it was able to do so without causing any disturbance. The researchers say sometimes the fish would swim alongside the strange-looking robo-fish in curiosity, while at other times they appeared utterly oblivious of its existence. While SoFi currently only records video, future versions will include sensors such as thermometers. The researchers also hope to make it more autonomous and envision a day when swarms of the soft robots, powered by solar cells, will follow fish around, allowing scientists to gain insights into schooling dynamics and monitor their population. â&#x20AC;&#x153;For us, this fish is magical," says Rus. "We imagine someday it might help us uncover more mysteries from the amazing underwater world that we know so little about."

Counting by Fives! Write the missing numbers inside the blank lollies

Flying Cows Cows called Daisy Are often lazy. But cows called Brian They be flyin' Up in the air And out into space Because of the grass And the gasses it makes! ÂŠ2013 Gareth Lancaster

Connect the dots to make this Summer picture.

Where in the World? A school day in Malawi Malawi is a landlocked country in Southeast Africa. It borders with Zambia, Tanzania and Mozambique. It is a beautiful country with the Great Rift Valley running through it and Lake Malawi being a prominent feature. It is densely populated, with many of its people living in poverty. Esnart's days were not easy before she became part of a childrens charity sponsorship program in the village of Mtsiliza, Malawi. She never had enough to eat, and struggled to attend school. Even though primary school is free in Malawi, lots of things make it difficult for children to attend. Many families cannot afford simple school supplies and uniforms, while others need their children to stay home and work. But Esnart is one of the lucky ones, lets see her day. 5 a.m.: Esnart wakes up. She does her chores right awayâ&#x20AC;&#x201D;helping her mother sweep inside and outside their home.

After chores, Esnart washes her face and brushes her teeth for school. 7 a.m.: Esnart puts on her uniform and heads to school. She walks about 30 minutes to school.

2 p.m.: It's time for lunch! Esnart walks a mile to a charity building with her friends to get their meals.

3 p.m.: She gets help with reading at the after school tutoring program

4:30 p.m.: Tutoring is over, and Esnart plays with her friends. Her favorite game is a clapping game called Amina deya. 5 p.m.: Esnart walks home and helps her mother prepare dinner. After dinner, Esnart does her homework and prepares her things for school the next day. She prays before bed, thanking God for the day. She goes to bed around 8 p.m. to be ready to wake up early the next day

How the fun happens 1. Get an adult to cut the middles out of each quarter of the apple to create a mouth. Don’t worry about perfection, you are filling this gap with spread anyway so if you cut too deep, you can always just cover it up and no one will know. 2. Coat the inside of the cut gap with a filling of sunflower spread or butter. 3. Place 4 sunflower seeds on the top of the “mouth” for the teeth. 4. Place 1 sliced strawberry inside the mouth for the tongue. 5. “Glue” each eye made from the white chocolate button and choc chip above the mouth with a dab of butter to stick. 6. Serve with a smile.

How t o with i make ice c ce and ream salt Did you know you can make your own ice cream in less than 10 minutes with just milk, salt and ice?

Pour about a cup of milk into a ziploc bag, add the sugar and vanilla essence ( or just use flavoured milk ). Make sure this bag is properly sealed. Half fill a bigger ziploc bag with ice and add a good amount of salt. Put your milk bag into the ice bag and give it a good shake. Try and keep the milk in contact with the ice as much as possible. Keep rolling the ice over the milk, you should feel the ice in the bag get VERY cold, so might need to put a towel around the bag. Check the milk after 5 minutes, it should be a similar consistency to ice cream, but if not keep going for a bit longer.

When salt it mixed with ice it makes the ice melt as it lowers the freezing point of the ice, this is known as freezing point depression. The more salt you add the lower the freezing point. For the ice to melt heat must be absorbed from the surroundings ( in this case the milk mixture ) causing it to freeze. You should find the ice feels extra cold, which is why youâ&#x20AC;&#x2122;ll need a towel to cover the bag after a few minutes. https://youtu.be/yMLFfmq4NzY

George Stephenson was an engineer. He built steam locomotives for the first railways. Sometimes people call him 'the Father of the Railway'.

George Stephenson was born in 1781. At this time Britain was starting to change from a land of farms and small villages to a land of factories and big cities. We call this change the Industrial Revolution. By the time George Stephenson died in 1848, its new railways and factories had made Britain the richest country in the World.

George Stephenson's son Robert helped him build railways. Robert was born in 1803 and died in 1859. He became as famous as his father. Robert Stephenson built bridges too, and was a Member of Parliament.

motive o c o l t e's firs mph. But it Georg t only 4 weighing a t n e w s wagon d e l l u p ! One 'locomotive' at the 30 to n s Rainhill trials was driven by a horse! It fell to bits before the trials began.

Who is in the story?

What happens in the story?

Where is it happening?

How does it end?

Details for the competition are on the next page

Plan and write a story about a deep sea diving adventure! To enter all you have to do is write a story about a deep sea diving adventure. You could write about : ● What you see ● What you feel ● Strange under -water creatures or lost cities ● Magical adventures ● Exciting chases Your story could be thrilling, funny, scary….the choice is yours. Pictures can be used to add to the story. It can be as long/short as you like. Make sure the name, age & class of the pupil is on the back page of the story. Entries must be handed in to your class teacher by Friday 7th September.

We are looking for budding reporters for the next issue of the magazine. If you are interested come and have a chat to Mrs Norman.