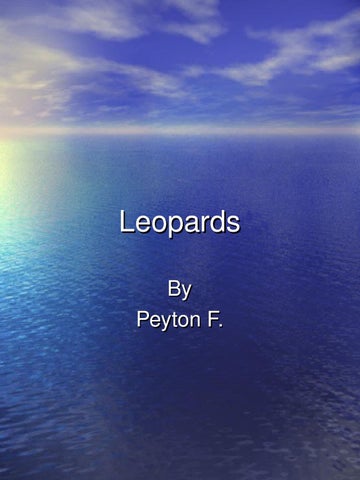 My animal is a leopard

What is a cub A cub is a baby leopard.  The mother moves them  from place to place so  predators don’t get them.

What they eat? Leopards eat  meat. some of  their favorite  prey to catch  and eat are  baboons

Most leopards  live in south Africa they live in  forests or grass  lands.

Leopards have  bodies covered  With  spotted fur.  Their  fur looks  like a cheetahs’  spots.  But leopards  ‘spots are black  with brown or  golden centers.

Why do leopards and  baboons not get along.  People in Africa Used to tell a story about  This. Long ago, leopards  and  Baboons were friends. But  one  Day, when baboon was  helping Leopard catch an animal for  lunch, baboon fell  asleep. Leopard was very angry  and Wanted to eat baboon  instead. Leopards and baboons  were never  Friends again.