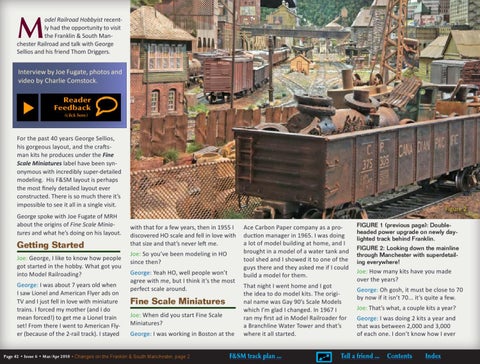 odel Railroad Hobbyist recently had the opportunity to visit the Franklin & South Manchester Railroad and talk with George Sellios and his friend Thom Driggers.

For the past 40 years George Sellios, his gorgeous layout, and the craftsman kits he produces under the Fine Scale Miniatures label have been synonymous with incredibly super-detailed modeling. His F&SM layout is perhaps the most finely detailed layout ever constructed. There is so much there it’s impossible to see it all in a single visit. George spoke with Joe Fugate of MRH about the origins of Fine Scale Miniatures and what he’s doing on his layout.

Getting Started Joe: George, I like to know how people got started in the hobby. What got you into Model Railroading? George: I was about 7 years old when I saw Lionel and American Flyer ads on TV and I just fell in love with miniature trains. I forced my mother (and I do mean forced!) to get me a Lionel train set! From there I went to American Flyer (because of the 2-rail track). I stayed

Figure 2 with that for a few years, then in 1955 I discovered HO scale and fell in love with that size and that’s never left me. Joe: So you’ve been modeling in HO since then? George: Yeah HO, well people won’t agree with me, but I think it’s the most perfect scale around.

Ace Carbon Paper company as a production manager in 1965. I was doing a lot of model building at home, and I brought in a model of a water tank and tool shed and I showed it to one of the guys there and they asked me if I could build a model for them. That night I went home and I got the idea to do model kits. The original name was Gay 90’s Scale Models which I’m glad I changed. In 1967 I ran my first ad in Model Railroader for a Branchline Water Tower and that’s where it all started. 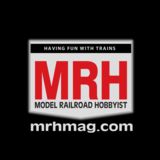