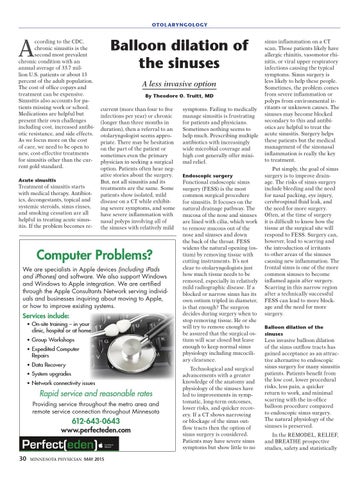 ccording to the CDC, chronic sinusitis is the second most prevalent chronic condition with an annual average of 33.7 million U.S. patients or about 13 percent of the adult population. The cost of office copays and treatment can be expensive. Sinusitis also accounts for patients missing work or school. Medications are helpful but present their own challenges including cost, increased antibiotic resistance, and side effects. As we focus more on the cost of care, we need to be open to new, cost-effective treatments for sinusitis other than the current gold standard. Acute sinusitis Treatment of sinusitis starts with medical therapy. Antibiotics, decongestants, topical and systemic steroids, sinus rinses, and smoking cessation are all helpful in treating acute sinusitis. If the problem becomes re-

Balloon dilation of the sinuses A less invasive option By Theodore O. Truitt, MD current (more than four to five infections per year) or chronic (longer than three months in duration), then a referral to an otolaryngologist seems appropriate. There may be hesitation on the part of the patient or sometimes even the primary physician in seeking a surgical option. Patients often hear negative stories about the surgery. But, not all sinusitis and its treatments are the same. Some patients show isolated, mild disease on a CT while exhibiting severe symptoms, and some have severe inflammation with nasal polyps involving all of the sinuses with relatively mild

Computer Problems? We are specialists in Apple devices (including iPads and iPhones) and software. We also support Windows and Windows to Apple integration. We are certified through the Apple Consultants Network serving individuals and businesses inquiring about moving to Apple, or how to improve existing systems.

symptoms. Failing to medically manage sinusitis is frustrating for patients and physicians. Sometimes nothing seems to help much. Prescribing multiple antibiotics with increasingly wide microbial coverage and high cost generally offer minimal relief. Endoscopic surgery Functional endoscopic sinus surgery (FESS) is the most common surgical procedure for sinusitis. It focuses on the natural drainage pathway. The mucosa of the nose and sinuses are lined with cilia, which work to remove mucous out of the nose and sinuses and down the back of the throat. FESS widens the natural opening (ostium) by removing tissue with cutting instruments. It’s not clear to otolaryngologists just how much tissue needs to be removed, especially in relatively mild radiographic disease. If a blocked or narrow sinus has its own ostium tripled in diameter, is that enough? The surgeon decides during surgery when to stop removing tissue. He or she will try to remove enough to be assured that the surgical ostium will scar closed but leave enough to keep normal sinus physiology including mucociliary clearance. Technological and surgical advancements with a greater knowledge of the anatomy and physiology of the sinuses have led to improvements in symptomatic, long-term outcomes, lower risks, and quicker recovery. If a CT shows narrowing or blockage of the sinus outflow tracts then the option of sinus surgery is considered. Patients may have severe sinus symptoms but show little to no

sinus inflammation on a CT scan. Those patients likely have allergic rhinitis, vasomotor rhinitis, or viral upper respiratory infections causing the typical symptoms. Sinus surgery is less likely to help these people. Sometimes, the problem comes from severe inflammation or polyps from environmental irritants or unknown causes. The sinuses may become blocked secondary to this and antibiotics are helpful to treat the acute sinusitis. Surgery helps these patients but the medical management of the sinonasal inflammation is really the key to treatment. Put simply, the goal of sinus surgery is to improve drainage. The risks of sinus surgery include bleeding and the need for nasal packing, eye injury, cerebrospinal fluid leak, and the need for more surgery. Often, at the time of surgery it is difficult to know how the tissue at the surgical site will respond to FESS. Surgery can, however, lead to scarring and the introduction of irritants to other areas of the sinuses causing new inflammation. The frontal sinus is one of the more common sinuses to become inflamed again after surgery. Scarring in this narrow region after a technically successful FESS can lead to more blockage and the need for more surgery. Balloon dilation of the sinuses Less invasive balloon dilation of the sinus outflow tracts has gained acceptance as an attractive alternative to endoscopic sinus surgery for many sinusitis patients. Patients benefit from the low cost, lower procedural risks, less pain, a quicker return to work, and minimal scarring with the in-office balloon procedure compared to endoscopic sinus surgery. The natural physiology of the sinuses is preserved. In the REMODEL, RELIEF, and BREATHE prospective studies, safety and statistically 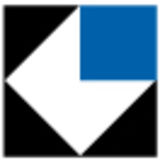