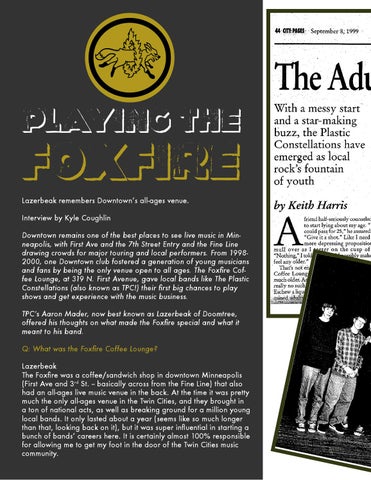 FOXFIRE Lazerbeak remembers Downtown’s all-ages venue. Interview by Kyle Coughlin Downtown remains one of the best places to see live music in Minneapolis, with First Ave and the 7th Street Entry and the Fine Line drawing crowds for major touring and local performers. From 19982000, one Downtown club fostered a generation of young musicians and fans by being the only venue open to all ages. The Foxfire Coffee Lounge, at 319 N. First Avenue, gave local bands like The Plastic Constellations (also known as TPC!) their first big chances to play shows and get experience with the music business. TPC’s Aaron Mader, now best known as Lazerbeak of Doomtree, offered his thoughts on what made the Foxfire special and what it meant to his band. Q: What was the Foxfire Coffee Lounge? Lazerbeak The Foxfire was a coffee/sandwich shop in downtown Minneapolis (First Ave and 3rd St. -- basically across from the Fine Line) that also had an all-ages live music venue in the back. At the time it was pretty much the only all-ages venue in the Twin Cities, and they brought in a ton of national acts, as well as breaking ground for a million young local bands. It only lasted about a year (seems like so much longer than that, looking back on it), but it was super influential in starting a bunch of bands’ careers here. It is certainly almost 100% responsible for allowing me to get my foot in the door of the Twin Cities music community. 12 MPLSzine // DOWNTOWN

MPLSzine, a submissions-based collaborative digital publication, is the latest project powered by the forces of MPLS Collective, A lynchpin for the Minneapolis creative community. Cover by: Joshua Wilichowski. Layout by: Bethany Hall and Amanda Reeder. 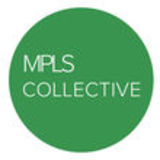