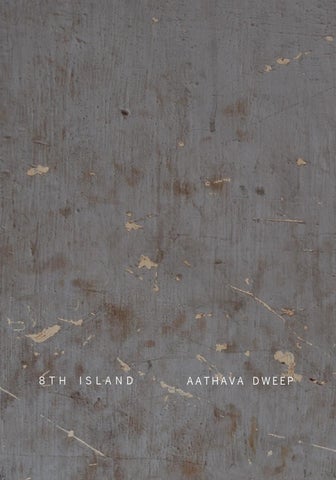 Partapur is an oasis inside the Rajasthan desert full of water and vegetation. This condition continuously shapes the terrain generating endemic dynamics that transform it into a subjective island. Addressing its environment within this context allows the identification of certain relationships that are registered in the 8th Island/Aathava Deep project.

The capsule holds a living piece of the terrain; a mobile island built to take part in the town of Partapur.

The 8th Island Collection of Living Plants has been made without following indexes from Natural Sciences or formal history. This Collection hosts every type of plant without distinction-- native, horticultural, foreign, weeds, ornamental, medicinal, free, paid or any other specimen-- in order to access a current display of the elements that are in motion in Partapur â&amp;#x20AC;&amp;#x2122;s environment. This living collection 2 is open to receiving specimen donations from the area of Partapur and within a radius of 30 kms -please contact Yatin Upadhyay, Sandarbh Office.

*The only species impossible to include in the 8th Island Collection of Living Plants is the Ankh. A young individual was found near the cricket field, but on being included in the collection, it gave rise to immediate discussion. It is said the Ankh brings adversity to householders and that no other plant will grow nearby. It disappeared with no further explanation after a couple of hours.

2.The researched terrain was determined by the transmission range of the local TV channel PB Patrika, which covers a radius of 30 kms, giving name to what is today denominated Partapurâ&amp;#x20AC;&amp;#x2122;s area.

The absolute water island of Partapur is invaded every year during the dry season by Northern people on transit. These persons walk away from the arid lands of the Rajasthan to break into the encapsulated lakes and government pumps. Once the monsoon finally arrives to their own lands itâ&amp;#x20AC;&amp;#x2122;s time for them to walk back again. The underground water level differences between the Rajasthan state and this particular area shapes the islandâ&amp;#x20AC;&amp;#x2122;s traits. Dr. A.K. Soni, expert in water mining, says that while in the

Rajasthan desert areas in general, underground water is found at least at 40m and as deep as 200m, in the pre-monsoon season in the Partapur area in 2012, water was tracked at just 5 to 8m, making this land a particularly valuable one. The fact that ground water quality is in general poor (brackish to saline) at deeper levels, adds even more value to it 1 says the expert from Nagpur. Partapur is located at 23.6°N latitude and 74.17°E longitude. It is part of the Land of the Hundred Islands, the Banswara District of southern Rajasthan, India. 1.The vocabulary is inspired by the book by Peter Sloterdijk, Esferas III, translated by Isidoro Reguera. España: Ediciones Siruela, 2006.

Over 100 new Ganesh islands emerge each year adjoining the submarine Archipelago of Ganeshes that started forming in the year Lala Lajpat Rai created a completely new method to extend national territories. Strange elephant forms were shaped on land and thrown into the water by numerous groups to create submarine islands during the month of September. His popular method was said to unite people and soon after was replicated in Partapur. Geologists estimate that the Ganesh territory in Partapur will rise to the surface in the XXXVII century.

Koshile Joshi chose this background paper when he started his photography shop 5 years ago. He has portrayed over a thousand Partapur islanders inside the green island scenario.

3. “It’s all desert; you can see the ocean for 360 degrees in the round”. Photograph property of Navin Chandra Acharia.

“I have never seen a tree in thirteen years”, says Navin Chandra Acharia who worked in a hotel in Bahrain and is now back in Partapur. Only fifteen Partapur islanders live in Bahrain, one of them is Suria’s husband whom Navin invited to this other island. He is still there. This is a shiny tree Navin brought back as a souvenir. He will soon leave for Kuwait, another desert where a larger number of Partapur islanders temporarily live.

A NEW ECOLOGICAL LEVEL Almost all plants in the area grow on the surface, except for the Tulsi. There is a different level, from 1m to 1.6m high, where another vegetation layer grows-- itâ&amp;#x20AC;&amp;#x2122;s the Tulsi on top of its holy base. Every Hindu house and temple installs one in a separate elevated place, safe from animals and dirty water, so it can grow well to bring prosperity. The survival of this level depends on the nurturing of women: a clean water supply, daily prayer and yearly nutrients provided by saris, bangles and bindis buried under the soil on the 11th day of the black fortnight of the Kartik month. A healthy specimen can be appreciated in the Shitlamata temple, where Suria is the priest. She stole it from a neighbourâ&amp;#x20AC;&amp;#x2122;s house near the river, and looks after it carefully. Temple visitors complete the nurturing by pruningeating the Tulsi, which they find very holy and tasty.

The photo travelled 3.5 hours by plane from the Gulf country of Bahrain to Azamgarh and 5 hours by bus from Azamgarh to Partapur. Suria unrolled the two pieces and hanged them together on the living room wall. The palm leaves are from a place unknown to her. &gt;&gt;

Only two kinds of plant specimens grow on the domestic terrains of Partapur. It is said that if you buy these plants they donâ&amp;#x20AC;&amp;#x2122;t grow as big as if you steal them. Epipremnum aureum, also called Money Plant, is one. It has aerial roots that reach for the ceiling, embracing the

architectural space of each house as the family gets wealthier. There are cases when the Epipremnum aureum has climbed as high as three stories, but the family still remains in debt.

EXPEDITIONS TO ASSEMBLE THE 8TH ISLAND COLLECTION OF LIVING PLANTS

The awareness of being islanders in the desert, as well as the current specific levels of interaction between themselves and the plants, expands the islandâ&amp;#x20AC;&amp;#x2122;s territory.

Sandarbh Residency Is a non profit initiative founded by visual artists from India in 2003 to increase interaction between the rural and the urban situation with art and culture. They organise short span site-specific artists’ workshops and one month long residencies in rural situations in Partapur, Banswara, India. www.sandarbhart.com Anne Montt Is an artist from Chiloé Island in South America who lives and works in Santiago, Chile. She graphically defines already existing spaces, making tangible the relationships that are in motion. She studied Visual Arts at Universidad Católica de Chile and at Bologna University, Italy and participated in the “Taller Experimental de Gráfica” in Havana, Cuba, specializing in lithography. Her first solo exhibition, “De Cuba a Castro”, was held in Castro, Chiloé Island in 2010. anne.montt@gmail.com

Patricia Domínguez Is a Chilean visual artist and methodological naturalist who lives and works in New York and Santiago, Chile. She is a MFA Studio Art Candidate at Hunter College. She holds a Visual Arts degree from Universidad Católica de Chile and studied Botanical and Natural Science Illustration at the New York Botanical Garden. She has participated in several residencies such as in the “American Museum of Natural History” (2011), “The Watermill Center” (2011), and in the “Institute of Critical Zoologists” (2012). Her work has been published in books such as “Younger Than Jesus: Artist Directory” by the New Museum of Contemporary Art among others. www.patriciadominguez.com

This project was made in collaboration between Anne Montt and Patricia Domínguez at "Sandarbh Artist Residency", June 2012. It is public display in Partapur, Banswara District, Rajasthan, India. 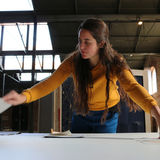