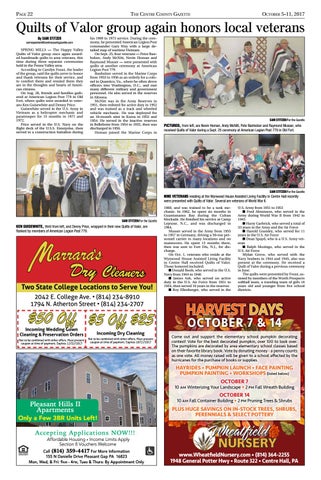 SPRING MILLS — The Happy Valley Quilts of Valor group once again awarded handmade quilts to area veterans, this time during three separate ceremonies held in the Penns Valley area. According to Carolyn Foust, the leader of the group, said the quilts serve to honor and thank veterans for their service, and to comfort them and remind them they are in the thoughts and hearts of American citizens. On Aug. 28, friends and families gathered at American Legion Post 779 in Old Fort, where quilts were awarded to veterans Ken Guisewhite and Denny Price. Guisewhite served in the U.S. Army in Vietnam as a helicopter mechanic and paratrooper for 15 months in 1971 and 1972. Price served in the U.S. Navy on the flight deck of the U.S.S. Enterprise, then served in a construction battalion during

his 1969 to 1973 service. During the ceremony, he presented American Legion Post commander Gary Way with a large detailed map of wartime Vietnam. On Sept. 25, four veterans — Peter Banholzer, Andy McNitt, Nevin Homan and Raymond Musser — were presented with quilts at another ceremony at American Legion Post 779. Banholzer served in the Marine Corps from 1953 to 1956 as an orderly for a colonel in Quantico, Va., where he often drove officers into Washington, D.C., and met many different military and government personnel. He also served in the reserves in Altoona. McNitt was in the Army Reserves in 1951, then enlisted for active duty in 1952 and was trained as a track and wheeled vehicle mechanic. He was deployed for an 18-month stint in Korea in 1953 and 1954. He served in the inactive reserves in Bellefonte from 1954 to 1955, then was discharged in 1956. Homan joined the Marine Corps in

PICTURED, from left, are Nevin Homan, Andy McNitt, Pete Banholzer and Raymond Musser, who received Quilts of Valor during a Sept. 25 ceremony at American Legion Post 779 in Old Fort.

KEN GUISEWHITE, third from left, and Denny Price, wrapped in their new Quilts of Valor, are flanked by members of American Legion Post 779.

Not to be combined with other offers. Must present coupon at time of payment. Expires 12/31/2017

Not to be combined with other offers. Must present coupon at time of payment. Expires 10/21/2017

Only a Few 3BR Units Left!

1960, and was trained to be a tank mechanic. In 1962, he spent six months in Guantanamo Bay during the Cuban blockade. He finished his service at Camp Lejeune, N.C., and was discharged in 1964. Musser served in the Army from 1955 to 1957 in Germany, driving a 50-ton personnel carrier to many locations and on maneuvers. He spent 13 months there, then was sent to Fort Dix, N.J., for discharge. On Oct. 1, veterans who reside at the Wynwood House Assisted Living Facility in Centre Hall received Quilts of Valor. Those honored included: ■ Donald Boob, who served in the U.S. Navy from 1944 to 1946 ■ James Ash, who served on active duty in the U.S. Air Force from 1951 to 1954, then served 10 years in the reserves ■ Roy Ellenberger, who served in the

U.S. Army from 1951 to 1953 ■ Fred Abramson, who served in the Army during World War II from 1942 to 1945 ■ Harry Garbrick, who served a total of 33 years in the Army and the Air Force ■ Harold Gramley, who served for 11 years in the U.S. Air Force ■ Dean Spayd, who is a U.S. Army veteran ■ Ralph Mozingo, who served in the U.S. Air Force Mylan Grove, who served with the Navy Seabees in 1944 and 1945, also was present at the ceremony. He received a Quilt of Valor during a previous ceremony in June. The quilts were presented by Foust, assisted by members of the Worth Prospects softball team, a traveling team of girls 16 years old and younger from five school districts.

Come out and support the elementary school pumpkin decorating contest! Vote for the best decorated pumpkin, over 100 to look over. The pumpkins are decorated by area elementary school classes based on their favorite library book. Vote by donating money - a penny counts as one vote. All money raised will be given to a school affected by the hurricanes for the purchase of books or supplies.