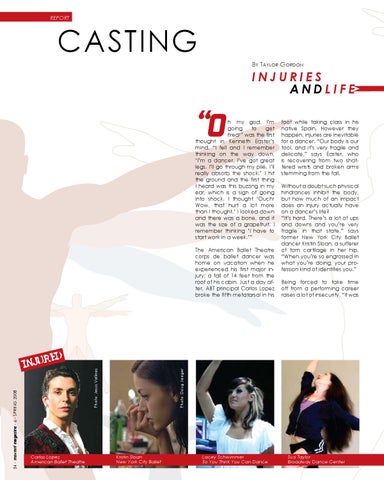 h my god, I’m going to get fired!” was the first thought in Kenneth Easter’s mind. “I fell and I remember thinking on the way down, ‘I’m a dancer. I’ve got great legs. I’ll go through my plié. I’ll really absorb the shock.’ I hit the ground and the first thing I heard was this buzzing in my ear, which is a sign of going into shock. I thought ‘Ouch! Wow, that hurt a lot more than I thought.’ I looked down and there was a bone, and it was the size of a grapefruit. I remember thinking ‘I have to start work in a week.’” The American Ballet Theatre corps de ballet dancer was home on vacation when he experienced his first major injury; a fall of 14 feet from the roof of his cabin. Just a day after, ABT principal Carlos Lopez broke the fifth metatarsal in his

foot while taking class in his native Spain. However they happen, injuries are inevitable for a dancer. “Our body is our tool, and it’s very fragile and delicate,” says Easter, who is recovering from two shattered wrists and broken arms stemming from the fall. Without a doubt such physical hindrances inhibit the body, but how much of an impact does an injury actually have on a dancer’s life? “It’s hard. There’s a lot of ups and downs and you’re very fragile in that state,” says former New York City Ballet dancer Kristin Sloan, a sufferer of torn cartilage in her hip. “When you’re so engrossed in what you’re doing, your profession kind of identifies you.” Being forced to take time off from a performing career raises a lot of insecurity. “It was

Lacey Schwimmer So You Think You Can Dance

Sabra Johnson and Danny Tidwell as featured on the cover of the Spring 2008 of movmnt magazine. Inside, Neil Haskell joins Danny and Sabra for an exclusive fashion story photographed by Gary Land and a very straight forward revealing conversation we had with the top 3 contestants of So you think you... Published by David Benaym 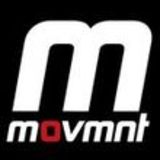