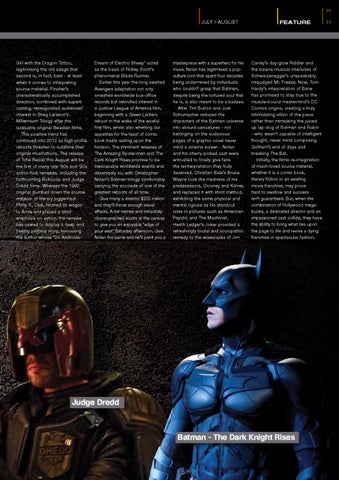 Girl with the Dragon Tattoo, legitimising the old adage that second is, in fact, best - at least when it comes to interpreting source material. Fincher’s characteristically accomplished direction, combined with superb casting, reinvigorated audiences’ interest in Stieg Larsson’s Millennium Trilogy after the lacklustre original Swedish films. This positive trend has continued into 2012 as high profile reboots threaten to outshine their original incarnations. The release of Total Recall this August will be the first of many late ‘80s and ‘90s action flick remakes, including the forthcoming Robocop and Judge Dredd films. Whereas the 1990 original dumbed down the source material of literary juggernaut Philip K. Dick, hitched its wagon to Arnie and placed a strict emphasis on action, the remake has vowed to display a deep and overtly political story, honouring the author whose ‘Do Androids

Dream of Electric Sheep’ acted as the basis of Ridley Scott’s phenomenal Blade Runner. Earlier this year the long awaited Avengers adaptation not only smashed worldwide box-office records but rekindled interest in a Justice League of America film, beginning with a Green Lantern reboot in the wake of the woeful first film, whilst also whetting our appetites for the feast of comic book treats resting upon the horizon. The imminent releases of The Amazing Spider-man and The Dark Knight Rises promise to be inescapable worldwide events and deservedly so, with Christopher Nolan’s Batman trilogy comfortably carrying the accolade of one of the greatest reboots of all time. Give many a director $200 million and they’ll throw enough visual effects, A-list names and intricately choreographed stunts at the canvas to give you an enjoyable ‘edge of your seat’ Saturday afternoon. Give Nolan the same and he’ll paint you a

masterpiece with a superhero for his muse. Nolan has legitimised a popculture icon that spent four decades being undermined by individuals who couldn’t grasp that Batman, despite being the tortured soul that he is, is also meant to be a badass. After Tim Burton and Joel Schumacher reduced the characters of the Batman universe into absurd caricatures - not belonging on the audacious pages of a graphic novel never mind a cinema screen - Nolan and his cherry-picked cast were entrusted to finally give fans the reinterpretation they truly deserved. Christian Bale’s Bruce Wayne took the madness of his predecessors, Clooney and Kilmer, and replaced it with strict method, exhibiting the same physical and mental rigours as his standout roles in pictures such as American Psycho and The Machinist. Heath Ledger’s Joker provided a refreshingly brutal and sociopathic remedy to the wisecracks of Jim

Carrey’s day-glow Riddler and the bizarre musical interludes of Schwarzenegger’s unspeakably misjudged Mr. Freeze. Now, Tom Hardy’s interpretation of Bane has promised to stay true to the muscle-bound mastermind’s DC Comics origins, creating a truly intimidating villain of the piece rather than mimicking the juiced up lap-dog of Batman and Robin - who wasn’t capable of intelligent thought, never mind composing Gotham’s end of days and breaking The Bat. Initially, the filmic re-imagination of much-loved source material, whether it is a comic book, literary fiction or an existing movie franchise, may prove hard to swallow and success isn’t guaranteed. But, when the combination of Hollywood megabucks, a dedicated director and an impassioned cast collide, they have the ability to bring what lies upon the page to life and revive a dying franchise in spectacular fashion. 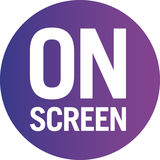