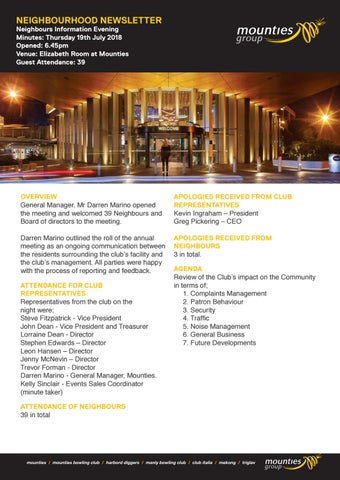 OVERVIEW General Manager, Mr Darren Marino opened the meeting and welcomed 39 Neighbours and Board of directors to the meeting.

Darren Marino outlined the roll of the annual meeting as an ongoing communication between the residents surrounding the club’s facility and the club’s management. All parties were happy with the process of reporting and feedback.

APOLOGIES RECEIVED FROM NEIGHBOURS 3 in total.

NEIGHBOURHOOD NEWSLETTER Neighbours Information Evening Minutes: Thursday 19th July 2018 Opened: 6.45pm Venue: Elizabeth Room at Mounties Guest Attendance: 39 MOUNTIES CURRENT MATTERS & FOLLOW UP 1. Complaints Management. - Neighbours were informed that minimal complaints were received in the review period. A few construction complaints were received and were dealt with quickly and followed up with the Neighbours. No complaints or feedback received. 2. Patron Behaviour. - Neighbours were advised that anti-social behaviour has been reduced significantly due to the hard work of the board, management, staff and security. No complaints or feedback received 3. Security. - Still maintain the same level of security through the clubs 442 CCTV cameras that run 24/7. This will always be implemented as the club grows. - Very little concerns reported since the introduction of the security boundary car that is patrolling the area. It has been advised that the car has helped with decreasing poor patron behaviour in the area. No complaints or feedback received 4. Traffic. - Traffic flow has been successful with the new Humphries road club entrance for arrivals and departures keeping the noise level and traffic management to a minimum. Additional services will be provided once the new car park is complete. - Strict management procedures and guidelines continue to ensure the traffic during construction is minimal. - Over the next few years all club trade deliveries will be received on the far side of the club away from the houses to reduce noise and traffic flow. No complaints or feedback received. 5. Noise Management. - Slight increase in noise complaints, mainly due to the construction work due to machinery use outside of the approved DA times. This was addressed and resolved immediately.

- Positive feedback has been received throughout the year regarding the decrease in patron noise levels. No further complaints or feedback received 6. General Business Floor opened to all attendees for general discussion. Neighbour: Matter received regarding the number of attendees at the midyear neighbour’s forum compared to the end of year neighbour’s Christmas meeting. Mr Grimshaw has requested that the board look at only inviting those who attend the mid-year form be invited to the Christmas meeting. A notion that children may not attend the Neighbours Christmas meeting has been in place since the 2017 function. Neighbour: Matter received regarding the gate on Kewin Avenue. The gate is constantly being closed from 8pm onwards. When calling the club staff or security there is an extensive wait time for a club staff member to come and open the gate. Club has extended to 10pm. 7. Future Developments - Darren Marino - General Manager presented neighbours with updates on present and future club development. - Completion of the new members / sports bar area. - Where Mounties is up to with the interior refurbishment of the gaming floor which will continue for the next 12 months. - Underground carpark was meant to start this September but has now been pushed back to January 2019. - Refurbishments of the new open plan administration area have started and are due to be completed in October 2018. - More information will be provided at the Christmas meeting regarding the club’s refurbishments. Darren Marino (General Manager) declared the meeting closed at 7.30pm.