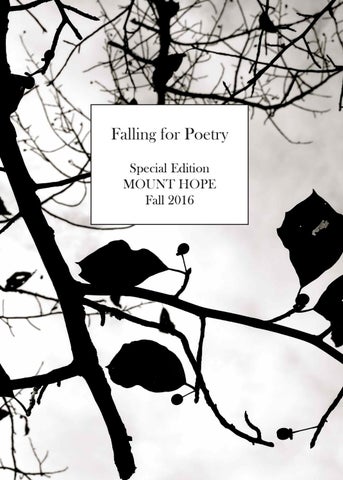 This small volume was prepared by our student editors as a supplemental collection to our regular Fall 2016 Issue. The wrapping that binds this booklet is made of lotka flower seed embedded paper. Plant it and water it, and as with the efforts of these esteemed contributors, beautiful things will sprout forth.

Mount Hope is published bi-annually in Bristol, Rhode Island, by the Roger Williams University Department of English and Creative Writing. Individual subscription rates are: $20 annually or $35 for two years. Mount Hope ÂŠ 2016, All Rights Reserved. No portion of Mount Hope may be reproduced in any form or by electronic means, including all information storage and retrieval systems, without written permission of Mount Hope magazine or authors of individual creative works. Any resemblance of events, locations or persons, living or dead, in creative works contained herein is entirely coincidental. Mount Hope cannot be held responsible for any views expressed by its contributors. Cover Photo: Redefined, by Sarah E.N. Kohrs

As young people aboard a rapidly changing planet, it has become apparent to us that climate change issues are an ever-present reality in our world. As humans, our personal connections to nature have been damaged by a lack of interaction with the outside world. We realize how important it is to highlight this link to the environment because our roots are intertwined with the genetic construct of planet earth. Itâ&amp;#x20AC;&amp;#x2122;s easy to overlook the depth of our connection to the world around us, but we have noticed our poets tapping into this concept. Whether overtly or subtly, the poets featured in this small edition have woven nature imagery and details into their writing. Returning to their roots, they have embraced the simple beauties of the natural world. Enjoy! Kate Gladsky â&amp;#x20AC;&amp;#x2DC;16 Maggie McLaughlin â&amp;#x20AC;&amp;#x2DC;16 co-managing editors

Adam Szetela Adam Szetela is a scholar and a poet who lives in the Boston area. His work has appeared, or is forthcoming, in Grasslimb: International Journal of Art and Literature, Evening Street Review, and ISLE: Interdisciplinary Studies in Literature and Environment.

After the Funeral A young girl walks through the woods stepping over a baby evergreen struggling to live through the December frost. In her coat pocket she carries the sketchbook her father left her and a worn pencil sharpened by his blade. On a mighty slope beyond the echo of the road she sketches the young sapling still standing beside its progenitor collapsed in the snow. Her tears, frozen on the page create a drip-drop bridge between her soft sketch and the finished drawing of a once-great tree whose bark bears her fatherâ&amp;#x20AC;&amp;#x2122;s initials. 7

William Derge William Derge’s poems have appeared in Negative Capability, The Bridge, Artful Dodge, Bellingham Review, and many other publications. He is the winner of the $1,000 2010 Knightsbridge Prize judged by Donald Hall. He is a winner of the Rainmaker Award judged by Marge Piercy. He has received honorable mentions in contests sponsored by The Bridge, Sow’s Ear, and New Millennium, among others. He has been awarded a grant by the Maryland State Arts Council.

Leaf Talk #1 If you are not Disposed to knowing Nature, Intimately, Wendy Does a little number On the weekend leaf peepers And dabbler ducks. She’s eager to show That all is not hue, shape, And sheen. There’s more Subtlety to a leaf than meets The casual observer’s eye. Take the difference between A red maple leaf and a sugar. The veins, surface, and color Are remarkably similar. We squint to detect The single integrant That stamps them separate But essentially equal. At our age, It isn’t easy to tease out What’s different in anything, Even where The odds are fifty-fifty. But here’s the thing, It’s even harder to care. 9

Leaf Talk #2 How did we not notice The little spikes that tipped The sugar maple leaf Along its edges Like the first week of stubble On a pre-teenâ&amp;#x20AC;&amp;#x2122;s cheek? We are old and out of focus. Our eyes are not The Hubble Telescopes They once were, not even close. Let Wendy have her little fun. We are so often summoned To have our ignorance Waved in our faces with a sprig of leaves Or Wikipedia facts That throttle our quaint beliefs. I remember the potted plant That graced my window sill For weeks. My mother watered And nurtured it Until told that it was cannabis. That knowledge did not Upset her much; she let the bush die there, nonetheless. ISSUE 10 â&amp;#x20AC;˘ MOUNT HOPE

Tree Talk Wendy instructs, Though coniferous, The tamarack nee larch Is made of other stuff And swings both ways.

The trappings of another. Itâ&amp;#x20AC;&amp;#x2122;s an old story Of bardic proportions Some embrace notions Of racial superiority To which the rejects may oppose: Out of a deep-rooted urge Do we not all photosynthesize? To buck its evergreen lineage If it rains on us, It goes deciduous in the fall do we not all osmose? And lets its delicate Needlework unthread Like the best leaf foliage That limns the forest floor, Oak, maple, and elm Conifer or deciduous The purebreds may decide They cannot accept in their striated stratosphere A hybrid breed that Starts the year on one side Of the family tree And then puts on (sloughs off?)

Lois Levinson Lois Levinson is a member of the Poetry Book Project at Lighthouse Writers Workshop in Denver, Colorado, where she is working on the manuscript of her first book. Her poems have appeared in Bird’s Thumb, Clementine Poetry Journal, The Corner Club Press, These Fragile Lilacs, Mountain Gazette, The Literary Nest and Gravel.

West of Ramona A row of rural mailboxes along the dirt road hodgepodge of receptacles tilted at wacky angles unsteady on their posts gaggle of crimsons jades cobalt blues mustard yellows crane their necks mouths agape like nestlings anxious to be fed.

Murmuration From a distance you might mistake it for a cloud of smoke as it spreads across the canvas of prairie sky, shape-shifting, roiling, tumultuous, first a dancing funnel cloud, then an elephant rolling over, a dragon rearing up, a galaxy spinning, then collapsing, a phantasmagoria formed by a myriad of starlings locked in labyrinthine ballet, each image lasting only an instant, then dissolving, as if a passage to another dimension had revealed itself and then vanished. ISSUE 10 â&amp;#x20AC;˘ MOUNT HOPE

Bird at Work A downy woodpecker, six inches of determination, red nape lit like a taillight, hangs upside down from a maple branch, jackhammering dead wood, mining a vein of insects, his attention so fixed on his work he is unaware of me beneath him looking up enthralled.

Ellen Goldsmith Ellen Goldsmith is the author of Where to Look, Such Distances and No Pine Tree in This Forest Is Perfect, which won the Hudson Valley Writers’ Center 1997 chapbook contest. “The Secret of Life” from Such Distances was read by Garrison Keillor on Writer’s Almanac. She is a resident of Cushing, Maine and professor emeritus of The City University of New York.

All At Once From a tree hollowed by lightning, an arm rises, commanding the view. A group of rocks becomes a rolling wave. Crows lift from the lawn all at once. Last night my dream was holding bird seed. It all slipped into the crack in the road. Life: a homemade swing, ropes attached to trees, the wooden seat uncomfortable but who cares when each push adds height and speed. And then, too soon, feet scrape the earth. Three trees stand together. I move. They bend.

This is a small volume published as an accompanying feature of Issue 10 of Mount Hope.