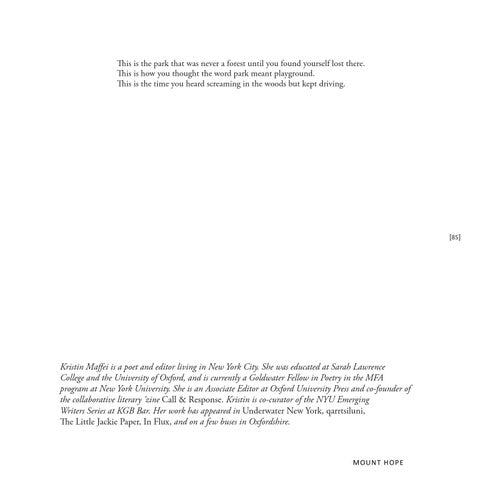 This is the park that was never a forest until you found yourself lost there. This is how you thought the word park meant playground. This is the time you heard screaming in the woods but kept driving.

Kristin Maffei is a poet and editor living in New York City. She was educated at Sarah Lawrence College and the University of Oxford, and is currently a Goldwater Fellow in Poetry in the MFA program at New York University. She is an Associate Editor at Oxford University Press and co-founder of the collaborative literary â&#x20AC;&#x2122;zine Call & Response. Kristin is co-curator of the NYU Emerging Writers Series at KGB Bar. Her work has appeared in Underwater New York, qarrtsiluni, The Little Jackie Paper, In Flux, and on a few buses in Oxfordshire.