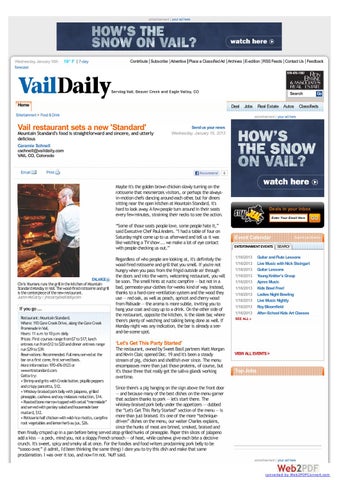 Mountain Standard's food is straightforward and sincere, and utterly delicious

Send us your news

Maybe it's the golden brown chicken slowly turning on the rotisserie that mesmerizes visitors, or perhaps the alwaysin-motion chefs dancing around each other, but for diners sitting near the open kitchen at Mountain Standard, it's hard to look away. A few people turn around in their seats every few minutes, straining their necks to see the action. “Some of those seats people love, some people hate it,” said Executive Chef Paul Anders. “I had a table of four on Saturday night come up to us afterward and tell us it was like watching a TV show ... we make a lot of eye contact with people checking us out.”

Chris Youmans runs the grill in the kitchen of Mountain Standard Monday in Vail. The wood-fired rotisserie and grill is the centerpiece of the new restaurant. Justin McCarty / jmccarty@vaildaily.com

Regardless of who people are looking at, it's definitely the wood-fired rotisserie and grill that you smell. If you're not hungry when you pass from the frigid outside air through the doors and into the warm, welcoming restaurant, you will be soon. The smell hints at rustic campfire — but not in a bad, permeate-your-clothes-for-weeks kind of way. Instead, thanks to a hard-core ventilation system and the wood they use — red oak, as well as peach, apricot and cherry wood from Palisade — the aroma is more subtle, inviting you to hang your coat and cozy up to a drink. On the other side of the restaurant, opposite the kitchen, is the sleek bar, where there's plenty of watching and talking being done as well. If Monday night was any indication, the bar is already a seeand-be-scene spot.

Deals in your inbox Enter Your Email Here

‘Let's Get This Party Started' The restaurant, owned by Sweet Basil partners Matt Morgan and Kevin Clair, opened Dec. 19 and it's been a steady stream of pig, chicken and shellfish ever since. The menu encompasses more than just those proteins, of course, but it's those three that really get the saliva glands working overtime.

Since there's a pig hanging on the sign above the front door — and because many of the best dishes on the menu garner that acclaim thanks to pork — let's start there. The whiskey-braised pork belly under the appetizers — dubbed the “Let's Get This Party Started” section of the menu — is more than just braised. It's one of the more “techniquedriven” dishes on the menu, our waiter Charles explains, since the hunks of meat are brined, smoked, braised and then finally crisped up in a pan before being served atop grilled hunks of pineapple. Paper thin slices of jalapeno add a kiss — a peck, mind you, not a sloppy French smooch — of heat, while cashews give each bite a decisive crunch. It's sweet, spicy and smoky all at once. For the foodies and food writers proclaiming pork belly to be “soooo over,” (I admit, I'd been thinking the same thing) I dare you to try this dish and make that same proclamation. I was over it too, and now I'm not. 'Nuff said. advertisement | your ad here

“I agree it is last year, but it's so good,” Anders said. “With that technique we were attempting to make it more like pastrami or corned beef. The pastrami flavor doesn't come out, but it has a meatier texture to it. It's a little firmer and not just falling apart pure fat.”

‘Straightforward' cuisine Each plates the kitchen kicks out proves the theory that good food doesn't have to be complicated. Most dishes have four or five ingredients, but my how they play well together. From the simple coal-roasted olives (the first I've ever eaten warm, incidentally) with pine nuts, sweet golden raisins and rosemary, to the molasses-rubbed quail with escarole, sweet-and-sour-blackberry reduction and Marcona almonds, the dishes themselves aren't comprised of unpronounceable ingredients you need to pull out the iPhone to Google. “(The dishes aren't) overworked,” Anders said. “What you see on the menu is what you're going to get. What you read is going to give you a good idea of what's coming. There's not a lot of hidden things; whereas with fine dining where there's a million garnishes, we wanted to be straightforward and obvious.” And while “most of the dishes are fairly easy,” as Anders said, it's the tools in the kitchen — namely a wood-fired rotisserie and grill that cost around $30K — that really sets apart what Anders and his crew can execute versus what a foodie in a home kitchen can do. “The equipment is what makes it go round,” he said. “The wood-fired rotisserie, that makes the difference, that makes the dish.”

Kissed by ‘sweet smoke' And the boys in the kitchen are making full use of the grill. Ninety percent of the items on the menu have at least one component that's come in contact with the grill, like the char-marked lemons that accompany seafood from the raw bar — oysters from both coasts, Gulf peel-and-eat shrimp, King Crab legs and more. Even the housemade mix for both the smoky bloody mary cocktail and seafood cocktail sauce is made with tomatoes charred on the grill. But don't let that word “smoky” give you the wrong idea. “Sometimes it has the wrong connotation and people think it tastes smoky and I don't think it does, at least in the sense of a barbecue smoke house. Instead, it adds depth and brings nuances out. (Cooking with wood) gives you a different flavor than gas. Gas doesn't taste like anything. With wood, you have that sweet smoke that kisses it.” The grill surface can be adjusted up or down, allowing the chefs to control the intensity of the heat on the meat. “We can build a nice crust that way,” he said. Which brings us back to the crispy chickens turning on the spit, a must-try entree and one of the best sellers so far. The chickens are brined for 24 hours with a good deal of lemon juice, which “builds flavor into the meat,” Anders said. Half a chicken is flanked by creamy, toothsome wild rice risotto and root vegetables cooked in foil on the coals of the grill. A bright lemon-and-herb gravy (Anders is a self-professed “nut” for lemon) ties everything together. If the sight didn't mesmerize you, the taste likely will. High Life Editor Caramie Schnell can be reached at 970-748-2984 or cschnell@vaildaily.com.