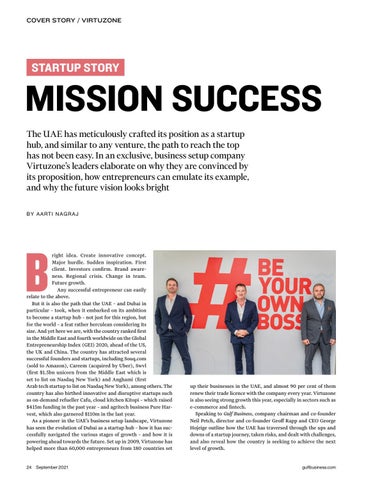 MISSION SUCCESS The UAE has meticulously crafted its position as a startup hub, and similar to any venture, the path to reach the top has not been easy. In an exclusive, business setup company Virtuzone’s leaders elaborate on why they are convinced by its proposition, how entrepreneurs can emulate its example, and why the future vision looks bright BY AARTI NAGRAJ

right idea. Create innovative concept. Major hurdle. Sudden inspiration. First client. Investors confirm. Brand awareness. Regional crisis. Change in team. Future growth. Any successful entrepreneur can easily relate to the above. But it is also the path that the UAE – and Dubai in particular – took, when it embarked on its ambition to become a startup hub – not just for this region, but for the world – a feat rather herculean considering its size. And yet here we are, with the country ranked first in the Middle East and fourth worldwide on the Global Entrepreneurship Index (GEI) 2020, ahead of the US, the UK and China. The country has attracted several successful founders and startups, including Souq.com (sold to Amazon), Careem (acquired by Uber), Swvl (first $1.5bn unicorn from the Middle East which is set to list on Nasdaq New York) and Anghami (first Arab tech startup to list on Nasdaq New York), among others. The country has also birthed innovative and disruptive startups such as on-demand refueller Cafu, cloud kitchen Kitopi – which raised $415m funding in the past year – and agritech business Pure Harvest, which also garnered $110m in the last year. As a pioneer in the UAE’s business setup landscape, Virtuzone has seen the evolution of Dubai as a startup hub – how it has successfully navigated the various stages of growth – and how it is powering ahead towards the future. Set up in 2009, Virtuzone has helped more than 60,000 entrepreneurs from 180 countries set 24

up their businesses in the UAE, and almost 90 per cent of them renew their trade licence with the company every year. Virtuzone is also seeing strong growth this year, especially in sectors such as e-commerce and fintech. Speaking to Gulf Business, company chairman and co-founder Neil Petch, director and co-founder Geoff Rapp and CEO George Hojeige outline how the UAE has traversed through the ups and downs of a startup journey, taken risks, and dealt with challenges, and also reveal how the country is seeking to achieve the next level of growth. gulfbusiness.com 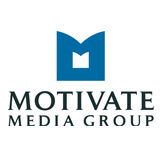 Your company starts here Why is the UAE the perfect example of a successful startup? Virtuzone's top executives tell the tale

Your company starts here Why is the UAE the perfect example of a successful startup? Virtuzone's top executives tell the tale