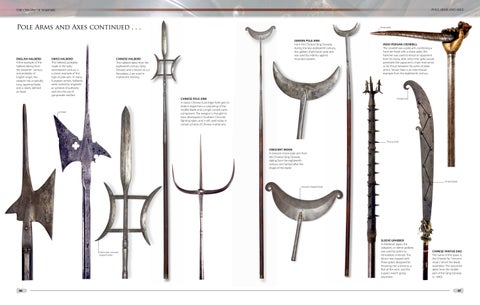 The origins of warfare

ENGLISH HALBERD A fine example of the halberd dating from the sixteenth century and probably of English origin, this weapon has a typically long, tapering blade, and a clearly defined ax-head.

Swiss HALBERD This halberd, probably made in the early seventeenth century, is a classic example of this type of pole arm. In many European armies, halberds were carried by sergeants as symbols of authority well into the era of gunpowder warfare.

Gekken pole arm From the Chinese Qing Dynasty, during the late eighteenth century, this gekken (half-moon) pole arm was used by infantry against mounted soldiers.

Chinese halberd This halberd dates from the eighteenth century Qing Dynasty and is known as a ji. Nowadays, ji are used in martial arts training.

CHINESE POLE ARM A classic Chinese fu pa (tiger fork) gets its trident shape from a conjoining of the middle blade and a single curved outer component. The weapon is thought to have developed in Southern China for fighting tigers, and is still used today in certain schools of Chinese martial arts.

INDO-PERSIAN CROWBILL The crowbill was a pole arm combining a hammer-head with a sharp spike; the hammer was used to knock an opponent from his horse, after which the spike would penetrate the opponent’s chain-mail armor or be thrust between the joints of plate armor. Shown here is an Indo-Persian example from the eighteenth century.

Crescent moon A crescent-moon pole arm from the Chinese Qing Dynasty, dating from the eighteenth century and named after the shape of the blade.

SLEEVE GRABBER In Medieval Japan, the sodegarami, or sleeve grabber, was used by police to immobilize criminals. The device was topped with three spikes designed for thrusting into a kimono; a flick of the wrist, and the suspect wasn’t going anywhere.

CHINESE yanyue dao The name of this spear is the Chinese for ”crescent moon,” which the blade resembles. This specimen dates from the middle part of the Qing Dynasty (c. 1840). From flint axes to automatic weapons, this beautifully illustrated encylopedia showcases a vast array of weaponry from all over the world.

From flint axes to automatic weapons, this beautifully illustrated encylopedia showcases a vast array of weaponry from all over the world.