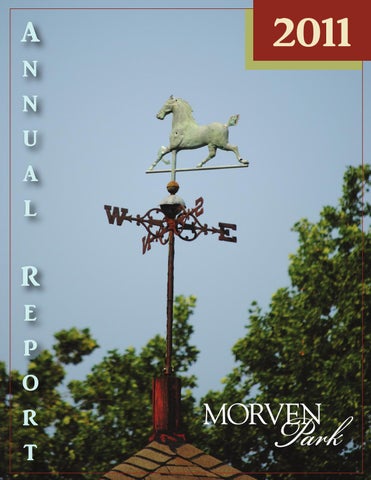 In 2011, the Westmoreland Davis Memorial Foundation, under which Morven Park operates, adopted the following mission statement and goals. The Foundation also adopted a 26-point Strategic Plan to advance each of the four goals. One of those strategies, accomplished in 2011, was the creation of a comprehensive Master Site Plan.

Inspired by the life of Virginia Governor Westmoreland Davis, Morven Park preserves and advances the ideals of civic responsibility, sustainable agriculture, and enhancement of life in rural Virginia.

To each of you who participated this year in an equestrian event, attended a holiday program, toured the Governor Davis residence, jogged through the property, or experienced any of the dozens of other activities available to you at Morven Park, I want to thank you for contributing to the energy of this unique place.

The momentum that built throughout 2011 was almost palpable, as we launched a new interpretive tour of the Mansion; updated our mission statement; adopted a comprehensive strategic plan; and developed a master site plan that blazes the trail for the future of our 1,200 acres and 50-plus buildings.

“The momentum that built throughout 2011 was almost palpable...”

We ended 2011 with a strong sense of direction and determination, guided by two sources: the needs expressed to us by the community, and the desires of Marguerite Davis to preserve the place and the ideals that inspired the life of her husband, Governor Westmoreland Davis.

Establishing the future direction of Morven Park was a vital first step, but all the plans and preparations mean nothing unless people have an opportunity to benefit from all that Morven Park has to offer. Otherwise, this becomes just a beautiful, yet remote, mansion on a hill. And so, we set to work to develop programming that enlightens, invigorates, and inspires our visitors. We set an ambitious goal for educational program attendance last year, aiming for a 25 percent increase from 2010. Even excluding the 3,000 people who visited Morven Park during the October events commemorating the Battle of Ball’s Bluff, our 7,345 program attendees helped us exceed our goal, increasing attendance by 28 percent. We believe that the new interpretive tour of the Governor’s residence plus the addition of programs such as the Governor’s Country Fair, the Princess Parade, the Free Family Fun Weekend, Eco-Friendly Easter, and picnics for Mothers’ and Fathers’ Days boosted overall attendance. We also introduced a series of farming and healthy food workshops, featuring topics such as raising your own poultry and growing berries for fun or profit, introducing Morven Park to an entirely new audience. Similarly, increased participation in Morven Park-managed equestrian events – such as spring and fall Horse Trials, Hunter Pace events, and cross-country schooling days – evidence the organization’s continuing tradition of equestrian excellence. (continued on next page)

“We ended 2011 with a strong sense of direction and determination.”

Increasingly, Morven Park has become the venue of choice for area weddings, corporate, and other special events. As in past years, we hosted the Northern Virginia Brewfest, the Ladies Board Rummage Sale, the Virginia Foxhound Club Show, the Fairfax Hunt Races, the Middleburg Classic Hunter-Jumper Show, the Loudoun Laurels annual awards, and dozens of other events including community fundraisers, horse shows, riding clinics, and private parties. Morven Park also is honored to continue serving as home to Loudoun Therapeutic Riding, an organization we are proud to support in its program expansion in 2011, providing services to wounded U.S. soldiers in treatment at Walter Reed Army Medical Center. Reflecting our support of Loudoun Therapeutic Riding, we included that organization as the co-recipient of income from several of our 2011 events, including the annual steeplechase races. Despite our efforts to increase event income by building community and corporate support, that support did not materialize, and the Board of Trustees voted to discontinue this event for financial reasons.

Morven Park continues to seek ways to engage the community, and last year launched membership opportunities for individuals and businesses, expanded its online profile with a presence on a number of social networking sites, and unveiled a monthly e-newsletter with distribution that grew to just under 5,000 in its first year.

We are excited about the future of this remarkable property to which we serve as stewards. We know that the work is far from done, as we strive to complete each element of our new strategic plan. Programming will continue to evolve and expand, and restoration and expansion of facilities will be ongoing. Morven Park is here for you to experience and enjoy, which is why we hope you share our sense of optimism and energy about seeing it meet its full potential. Such visionary plans will require visionary support. People like you can ensure that Morven Park will be here for the benefit of generations to come. Sincerely, Frank Milligan Executive Director

The plans adopted by the Board of Trustees in December 2011 touch every square foot of Morven Parkâ&#x20AC;&#x2122;s 1,200 acres. The Master Site Plan includes solutions to tie together the entire property, creating one main entrance from which visitors can reach any and all facilities and programs. And it reflects a vision for a future that allows the organization to fully live out its mission. To learn more, go to www.MorvenPark.org or click here.

Morven Park ended its fiscal year essentially level with 2010. In spite of its aggressive development of a new master site plan and new programs, the organization was successful in keeping expenses to a level that was a small fraction of 1 percent higher than the previous year.

Income was down slightly, by $133,003, mostly attributable to a slight decrease in the distribution from the Westmoreland Davis Memorial Foundation trust. Income from site rentals, admissions, and fundraising all increased over 2010. For the entire Consolidated Statement of Activities (for the year ended December 31, 2011), visit our website: www.MorvenPark.org or click here. Income

Morven Park thanks all of the following organizations and businesses that partnered with us on various projects and events in 2011. We are grateful for their donations of time, efforts, and expertise.