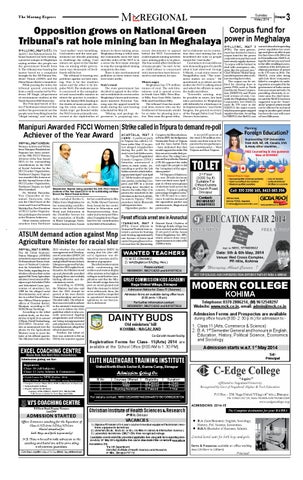 Corpus fund for Opposition grows on National Green Tribunal&#39;s rat hole mining ban in Meghalaya power in Meghalaya SHILLONG, MAY 3 (ET): On April 17, the National Green Tribunal banned rat hole mining, a practice unique to Meghalaya saying neither the people nor the government benefit from it. The tribunal was hearing the matter based on a complaint brought by the All Dimasa Students&#39; Union (ADSU) and the Dima Hasao district committee. While passing the order, the tribunal quoted extensively from a study conducted by Professor OP Singh, (department of environment studies) in the North Eastern Hill University. The Principal bench of Justice P Jyothimani observed that neither the government nor the people were benefiting from the &quot;illegal mining&quot; and only the

&quot;coal mafias&quot; were benefiting. Coal miners and the state government are already planning to challenge the ruling. Coal miners are upset at the blanket ban on mining while government says thousands of livelihoods will be lost. The tribunal is hearing two petitions against rat hole mining. One is by the students union and the other is by Impulse NGO. The students union is concerned at the unregulated and unscientific manner in which the practice is conducted in the Jaintia Hills leading to the deaths of many people during the rainy season as these &#39;death traps&#39; get flooded while the NGO is more primarily concerned at the exploitation of

minors in these mining areas. Meghalaya being a tribal state, the community owns the land, and this order of the NGT is in a sense the first major attempt to stop the unregulated mining rampant in the state. There is also environmental pollution as these mines turns river water acidic. State&#39;s stand The state government has decided to appeal to the tribunal to withdraw its recent order. Meghalaya&#39;s forest and environment minister Prestone Tynsong says the appeal would be made during the next hearing scheduled for May 19. &quot;Mining and geology department is preparing nec-

essary documents to appeal before the NGT. Government could regulate mining activities once mining policy is in place. The ban would affect livelihood of many people,&quot; he said. As far as child labour is concerned strict instructions have been issued to coal miners, he says. Miners angry Meghalaya has 576 million tonnes of coal. The sub-bituminous coal is spread across in South Garo Hills, West Khasi Hills, East Garo Hills, Jaintia Hills and East Khasi Hills. The tribunal&#39;s ban has made coal mine owners who say the livelihood of thousands would be at stake for pleasing just a few. They want the green tribu-

nal to elaborate on its contention that coal mining has not benefitted the state or people except the &quot;coal mafia.&quot; Coal miners in Garo hills are now demanding proof to justify what it had observed. George S Marak, a coal-mine owner of Nongalbibra said, &quot;The statement makes no sense.&quot; He questioned as to where are the mafias the NGT is talking about and asked the officials to name the mafia mermbers. &quot;Scientific mining, may be possible in states, but land rules prevalent in Meghalaya will definitely be a hindrance to its implementation,&quot; says Zinba Sangma, the general secretary of the Nongal Dobu Coal Truck Owners Association.

SHILLONG, MAY 3 (PTI): The state government has decided to form a corpus fund for the power corporation to pay them and have steady supply of power. &quot;A corpus will be formed to deal with emergency situation like the present one,&quot; Chief Minister Mukul Sangma told reporters after a cabinet meeting here today. The corpus can be utilised for clearing dues to power PSUs such as North East Electric Power Corporation (NEEPCO) and Power Grid at times of crisis. Currently the Meghalaya Energy Corporation Ltd (MeECL) owes Rs 379 crore to the NEEPCO, the major reason why the power giant stopped supply to the state. According to NEEPCO, the MeECL was

warned about the impending power regulation two years ago and given an offer to pay the then dues of Rs 200 crore in 24 installments. MeECL allegedly did not pay any heed to the offer resulting in accumulation of the debt plus additional purchase of power to Rs 379 crore in 2014. The MeECL, even after being split into three companies, failed to complete its auditing system as required by the government of India norms from any corporate body. On providing electricity to remote areas the chief minister said the MeECL has been suggested to go for &quot;standalone&quot; projects which would not be affected by technical snags in another grid, which has been the case with most of Garo Hills areas.

Manipuri Awarded FICCI Women Strike called in Tripura to demand re-poll Achiever of the Year Award IMPHAL, MAY 3 (MExN): Woman Activist and Writer from Manipur Binalakshmi Nepram has been awarded the 30th FICCI Women Achiever of the Year Award 2013-14 for outstanding contributions in the field of Social Activism by the FICCI Ladies’ Organization, Northeast Chapter. Nepram was awarded this honour at the 6th Annual Event of the FICCI Ladies’ Organization, Northeast Chapter, on April 26 in Guwahati. Dr. Mridul Hazarika, Vice Chancellor of Guwahati University, who was the Chief Guest of the event and Guest of Honour Malvika Rai, Past President of FICCI Ladies Organisation, jointly gave the awards to the Women Achievers. Other women achiever awardees from Northeast

Binalakshmi Nepram being awarded the 30th FICCI Women Achiever of the Year Award 2013-14 for outstanding contributions in the field of Social Activism.

India included Bertha G. Dkhar from Meghalaya for her outstanding contributions in the field of Social Work and Education in the Disability Sectors for the translation of Braille in Khasi Language, Sudakshina Sarma from Assam

AGArTALA, MAY 3 (IANS): A political party in Tripura has called a 12hour strike May 12 to protest alleged irregularities during the polls for the state&#39;s two Lok Sabha seats. The Tripura Pragatisheel Gramin Congress (TPGC) Saturday announced a dawn-to-dusk strike, demanding re-poll in the Lok Sabha seats for which balloting was held April 7 and April 12. &quot;All the leaders of opposition parties, including Congress and BJP, in a recent meeting have decided to observe the strike May 12 to protest the misdeeds in the elections to the two Lok Sabha seats in Tripura,&quot; TPGC president Subal Bhowmik told reporters here. Opposition parties - the

ZEO whether the school management and Development Committee (SMDC) of Laiphrakpam Laishram Mamang Leikai Primary School, Lilong was approved by him. When the ZEO replied in affirmative, the Minister stood up and physically assaulted by giving blows and verbally hurling offensive and discriminatory words. According to ATSUM, the Minister had also said that the ZEO should be posted at his own district Churachandpur and not in Thoubal valley. The tribal officer was even told to adhere to the minister&#39;s instruction and not to follow the SSA’s guideline which is why centrally sponsored flagship programmes and schemes are being misappropriated and adjusted in the name of local adjustment, alleged the tribal student body. Further, the tribal officer was ordered to file an FIR by the minister against

the incumbent SMDC by saying that his (the officer’s) signature was obtained by coercion and intimation at gunpoint. The tribal student union while condemning the reckless and wanton display of the minister at the highest ceiling to avoid further complication said that the Minister should resign from his post on moral ground and that if the demand is failed to be addressed, then, the union would be compelled to spearhead democratic agitations to see that justice is delivered.

Offers Extensive coaching for the Repeaters of Class-X/XII-Arts/XII-Sci/XII-Com Hostel attached for both Boys and Girls (separately) N.B: Those who seek to take admission in the coaching and hostel are ask to come along with parents/guardians.

Shamal Kanti Chakma of Hollongi-Kokila village has been arrested under Section 25 (d) and (f) of the Assam Forest Regulation Act, 1891, which attracts three years&#39; imprisonment or a fine of Rs 25000 or both.

A record 85 percent of the total 2.38 million electorate cast their vote in Tripura for the two parliamentary constituencies -- West Tripura and East Tripura.

Forest officials arrest one in Arunachal

ATSUM demand action against Mnp Agriculture Minister for racial slur IMPHAL, MAY 3 (NNN): The All Tribal Students’ Union Manipur (ATSUM) submitted a representation to Dr. Rameshwar Oraon, chairman of National Commission for Scheduled Tribes, New Delhi, regarding the institution of immediate action against Md. Nasir, Agriculture minister, Government of Manipur as per Scheduled Tribe and Scheduled Caste (prevention of atrocities) Act, 1989 for his alleged racial discrimination and atrocities to a tribal Zonal Education Officer/District project officer of Thoubal district, Manipur, according to ATSUM (Muan Tombing). According to the tribal student body, on the fateful day of April 24 at around 5:30 pm, David Tualzathang, ZEO/BDO Thoubal district as summoned over the phone by the Agricultural Minister went to meet the latter at his official quarter. The Minister had asked the

Congress, the Bharatiya Janata Party (BJP), the Indigenous Nationalist Party of Tripura and the Aam Aadmi Party - have indicated that they would support the strike. But they are yet to make their position clear. The ruling Communist Party of India-Marxist (CPI-M) opposed the strike and urged the people to foil the &quot;conspiracy of the opposition parties&quot;. &quot;Of Tripura&#39;s 23 lakh voters, over 20 lakh electorate have cast their votes April 7 and 12. Of the seven phases of elections held across the country, Tripura&#39;s polling percentage is highest so far,&quot; the CPI-M said in a statement. It said the demand of the opposition parties was undemocratic, illogical and provocative.

1) Diploma/ITI holder of 2-3 years course in medical equipment technician / electronic equipments technician. 2) Librarian (B.Lib., B.Lib.Sc. or B.L.I.Sc/MSc in Library &amp; Information Science) 3) Laboratory technician- DMLT / BSc from recognized college. Candidates should submit the prescribed application form along with their supporting documents by 15th May 2014.Application form can be downloaded from our website-www.cihsr.in And address it to The HR Department, Christian Institute of Health Sciences and Research, 4th Mile, Dimapur-797112

Admission Forms and Prospectus are available during office hours (9:00- 2: 30 p.m.) for admission to:- 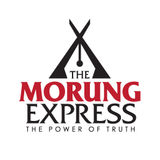