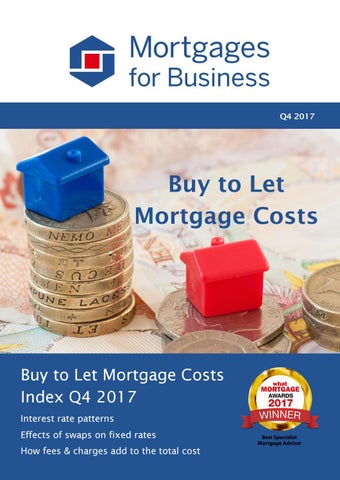 During the first nine months of 2017 a pattern emerged where swap rates rose rapidly to a peak every few months before declining steadily over the ensuing weeks. However, in Q4 rates remained elevated coinciding with the hike in Bank Rate on 2nd November from 0.25% to 0.50%.

Since July 2016 lendersâ&#x20AC;&#x2122; margins have been squashed across all fixed rate buy to let mortgage products. This was particularly noticeable on five year products in early November when swaps rose but average pricing reduced.

By the end of Q4, shorter term swaps (two, three and five-year) were higher than at the start of 2017, whereas 10-year term swap rates finish the year at roughly the same level as January, despite a series of peaks and troughs in between. Fixed rate buy to let mortgages Fixed rate mortgage products are typically based on the current swap rate of the same term, with the addition of the lenderâ&#x20AC;&#x2122;s operating 1

Whilst the rise in swaps was connected to the hike in Bank Rate (from 0.25% to 0.50%), it is unclear exactly why lenders would choose to reduce their already diminished margins. We speculate they chose this path in light of increased market competition as lenders vyed for customers in order to fulfil their fast-approaching, end of year lending targets. Five year fixed rate products have increased in popularity with borrowers for a number of reasons:

fixed rate than on shorter term products. Excluding fees, the margins over swap rates declined by around 0.4 percentage point between Q1 and Q4 of 2017, (see table overleaf—Q1 figures shown in brackets).

Tracker rate buy to let mortgages Buy to let mortgage tracker rates changed very little in Q4. The increase in the Bank Rate has had a delayed reaction on the tracker costs with the changes being seen in late November through to December. Unsurprisingly, the most discernible change was seen in the high loan to value category with an increase from 4.3% to 4.4% in early December 2017.

Conclusion Free from the race to meet end of year targets, it is unlikely that lenders will be looking to reduce rates again any time soon. If anything, they will be planning ways to make up for lost margins. And as the likelihood of another rise in Bank Rate draws ever closer, if landlords are in the market for a fixed rate, now might be the time to secure it.

Medium LTV trackers remained largely unchanged overall and the low LTV group, which has always been the most susceptible to changes, plateaued at the end of December at an average 3.8%.

In Q4 2017 lender arrangement fees, valuation fees and legal costs added an average of 0.58% onto the headline cost of a buy to let mortgage.

To the detriment of percentagebased fees, the proportion fee-free buy to let mortgage products rose to 16% from 14% in the previous quarter, probably as part of an incentive programme designed to meet end of year targets.

This is largely unchanged when compared to Q3, which had already seen a decrease due to competitive market forces. The only difference was a slight decrease in the low loan to value category from an average of 0.54% to 0.53%.

The average flat fee increased marginally in price but remains less than ÂŁ1,500.

Effect of Fees & Charges on Buy to Let Mortgages This quarterly index aims to outline the real costs of taking out a buy to let mortgage including the impact of fees and charges and underly...

This quarterly index aims to outline the real costs of taking out a buy to let mortgage including the impact of fees and charges and underly...