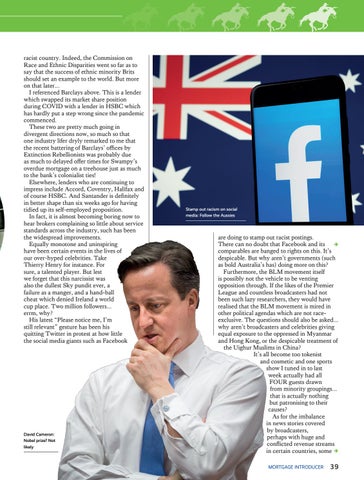 racist country. Indeed, the Commission on Race and Ethnic Disparities went so far as to say that the success of ethnic minority Brits should set an example to the world. But more on that later... I referenced Barclays above. This is a lender which swapped its market share position during COVID with a lender in HSBC which has hardly put a step wrong since the pandemic commenced. These two are pretty much going in divergent directions now, so much so that one industry lifer dryly remarked to me that the recent battering of Barclays’ offices by Extinction Rebellionists was probably due as much to delayed offer times for Swampy’s overdue mortgage on a treehouse just as much to the bank’s colonialist ties! Elsewhere, lenders who are continuing to impress include Accord, Coventry, Halifax and of course HSBC. And Santander is definitely in better shape than six weeks ago for having tidied up its self-employed proposition. In fact, it is almost becoming boring now to hear brokers complaining so little about service standards across the industry, such has been the widespread improvements. Equally monotone and uninspiring have been certain events in the lives of our over-hyped celebrities. Take Thierry Henry for instance. For sure, a talented player. But lest we forget that this narcissist was also the dullest Sky pundit ever, a failure as a manger, and a hand-ball cheat which denied Ireland a world cup place. Two million followers... errm, why? His latest “Please notice me, I’m still relevant” gesture has been his quitting Twitter in protest at how little the social media giants such as Facebook

Stamp out racism on social media: Follow the Aussies

are doing to stamp out racist postings. There can no doubt that Facebook and its → comparables are banged to rights on this. It’s despicable. But why aren’t governments (such as bold Australia’s has) doing more on this? Furthermore, the BLM movement itself is possibly not the vehicle to be venting opposition through. If the likes of the Premier League and countless broadcasters had not been such lazy researchers, they would have realised that the BLM movement is mired in other political agendas which are not raceexclusive. The questions should also be asked... why aren’t broadcasters and celebrities giving equal exposure to the oppressed in Myanmar and Hong Kong, or the despicable treatment of the Uighur Muslims in China? It’s all become too tokenist and cosmetic and one sports show I tuned in to last week actually had all FOUR guests drawn from minority groupings... that is actually nothing but patronising to their causes? As for the imbalance in news stories covered by broadcasters, perhaps with huge and conflicted revenue streams in certain countries, some →   MORTGAGE INTRODUCER