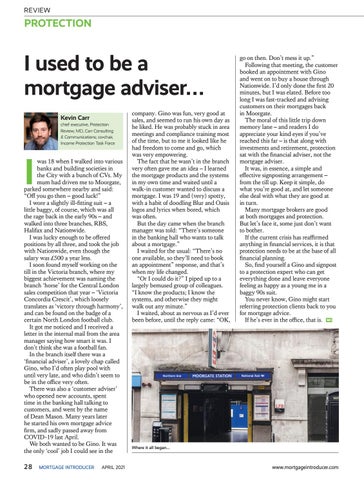 was 18 when I walked into various banks and building societies in the City with a bunch of CVs. My mum had driven me to Moorgate, parked somewhere nearby and said: “Off you go then – good luck!” I wore a slightly ill-fitting suit – a little baggy, of course, which was all the rage back in the early 90s – and walked into three branches, RBS, Halifax and Nationwide. I was lucky enough to be offered positions by all three, and took the job with Nationwide, even though the salary was £500 a year less. I soon found myself working on the till in the Victoria branch, where my biggest achievement was naming the branch ‘horse’ for the Central London sales competition that year – ‘Victoria Concordia Crescit’, which loosely translates as ‘victory through harmony’, and can be found on the badge of a certain North London football club. It got me noticed and I received a letter in the internal mail from the area manager saying how smart it was. I don’t think she was a football fan. In the branch itself there was a ‘financial adviser’, a lovely chap called Gino, who I’d often play pool with until very late, and who didn’t seem to be in the office very often. There was also a ‘customer adviser’ who opened new accounts, spent time in the banking hall talking to customers, and went by the name of Dean Mason. Many years later he started his own mortgage advice firm, and sadly passed away from COVID-19 last April. We both wanted to be Gino. It was the only ‘cool’ job I could see in the

company. Gino was fun, very good at sales, and seemed to run his own day as he liked. He was probably stuck in area meetings and compliance training most of the time, but to me it looked like he had freedom to come and go, which was very empowering. The fact that he wasn’t in the branch very often gave me an idea – I learned the mortgage products and the systems in my own time and waited until a walk-in customer wanted to discuss a mortgage. I was 19 and (very) spotty, with a habit of doodling Blur and Oasis logos and lyrics when bored, which was often. But the day came when the branch manager was told: “There’s someone in the banking hall who wants to talk about a mortgage.” I waited for the usual: “There’s no one available, so they’ll need to book an appointment” response, and that’s when my life changed. “Or I could do it?” I piped up to a largely bemused group of colleagues. “I know the products; I know the systems, and otherwise they might walk out any minute.” I waited, about as nervous as I’d ever been before, until the reply came: “OK,

go on then. Don’t mess it up.” Following that meeting, the customer booked an appointment with Gino and went on to buy a house through Nationwide. I’d only done the first 20 minutes, but I was elated. Before too long I was fast-tracked and advising customers on their mortgages back in Moorgate. The moral of this little trip down memory lane – and readers I do appreciate your kind eyes if you’ve reached this far – is that along with investments and retirement, protection sat with the financial adviser, not the mortgage adviser. It was, in essence, a simple and effective signposting arrangement – from the till up. Keep it simple, do what you’re good at, and let someone else deal with what they are good at in turn. Many mortgage brokers are good at both mortgages and protection. But let’s face it, some just don’t want to bother. If the current crisis has reaffirmed anything in financial services, it is that protection needs to be at the base of all financial planning. So, find yourself a Gino and signpost to a protection expert who can get everything done and leave everyone feeling as happy as a young me in a baggy 90s suit. You never know, Gino might start referring protection clients back to you for mortgage advice. If he’s ever in the office, that is. M I

Where it all began...