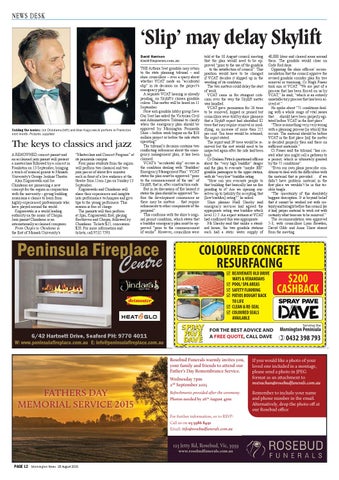 The keys to classics and jazz A RENOWNED concert pianist and an acclaimed jazz pianist will present a masterclass followed by a concert in Frankston on 13 September, bringing a touch of musical genius to Monash University’s George Jenkins Theatre. Alan Kogosowski and Joe Chindamo are pioneering a new concept for the region in conjunction with the university – giving budding musicians a chance to learn from highly experienced professionals who have played around the world. Kogosowski is a world leading authority on the music of Chopin. Jazz pianist Chindamo is an internationally acclaimed composer. From Chopin to Chindamo is the first of Monash University’s

“Masterclass and Concert Program” at its peninsula campus. Four piano students from the region will perform two classical and two jazz pieces of about five minutes each in front of a live audience at the theatre from 11am-1pm on Sunday 13 September. Kogosowski and Chindamo will share their experiences and insights into performance techniques and give tips to the young performers. This session is free of charge. The pianists will then perform at 3pm, Kogosowski first, playing Beethoven and Chopin, followed by Chindamo. Tickets $25, concession $20. For more information and tickets, call 9532 7593.

THE Arthurs Seat gondola may return to the state planning tribunal – and shire councillors – over a query about whether VCAT made an “accidental slip” in its decision on the project’s emergency plan. A separate VCAT hearing is already pending, on Skylift’s chosen gondola colour. This matter will be heard on 11 September. Now anti-gondola lobby group Save Our Seat has asked the Victorian Civil and Administrative Tribunal to clarify when the emergency plan should be approved by Mornington Peninsula Shire – before work begins on the $18 million project or before the ride starts operating? The tribunal’s decision contains two conflicting references about the emergency management plan, it has been claimed. VCAT’s “accidental slip” occurs in the condition dealing with “Bushfire/ Emergency Management Plan”. VCAT states the plan must be approved “prior to the commencement of the use” of Skylift, that is, after construction ends. But in its discussion of fire hazard it states the plan should be approved “before the development commences as there may be matters ... that require refinements to other components of the proposal”. This conforms with the shire’s original permit condition, which states that a bushfire emergency plan must be approved “prior to the commencement of works”. However, councillors were

told at the 10 August council meeting that the plan would need to be approved “prior to the use of the gondola … to the satisfaction of council”. This position would have to be changed if VCAT decides it slipped up in the wording of its condition. The two matters could delay the start of work. VCAT came in for stringent criticism over the way the Skylift matter was handled. VCAT gave permission for 26 trees to be removed, lopped or pruned but councillors were told by shire planners that a Skylift report had identified 82 trees that may require removal or modifying, an increase of more than 215 per cent. Ten trees would be retained, the report stated. The report said 39 trees would be removed but the rest would need to be inspected again after the ride had been built. Cr Graham Pittock questioned officers about the “very high bushfire” danger and the plan to evacuate “maybe 300” gondola passengers to the upper station, with its “very low” bushfire rating. “How can you evacuate people to that building that basically has no fire proofing to it? Are we opening ourselves up to liability for accepting that [low bushfire] rating?” he asked. Shire planner Niall Sheehy said emergency services had agreed the appropriate rating was bushfire attack level 12.5. An expert witness at VCAT had confirmed this was appropriate. Mr Sheehy said that unlike a standard house, the two gondola stations each had a static water supply of

Rosebud Funerals warmly invites you, your family and friends to attend our Father’s Day Remembrance Service.

40,000 litres and cleared areas around them. The gondola would close on Code Red days. Opposing the shire officers’ recommendation that the council approve the revised gondola corridor plan for tree removal or trimming, Cr Hugh Fraser took aim at VCAT. “We are part of a process that has been forced on us by VCAT,” he said, “which is an entirely unsatisfactory process that has been arrived at.” He spoke about “71 conditions dealing with a whole range of vital issues that … should have been properly agitated before VCAT in the first place”. “There is something very, very wrong with a planning process [in which] this occurs. The material should be before VCAT in the first place [so] the matter is decided properly then and there on sufficient materials.” Cr Fraser said the tribunal “has created what you might call a pathway to a permit, which is ultimately granted by the 71 conditions”. “Even our own plans prescribe conditions to deal with the difficulties with the material that is provided … if we didn’t have problem material in the first place we wouldn’t be in this terrible tangle. “The uncertainty of this absolutely beggars description. It is beyond belief that it cannot be worked out with certainty and brought before this council [so it has] proper material to work out with certainty what trees are to be removed.” The recommendation was approved 5-3, with councillors Lynn Bowden, David Gibb and Anne Shaw absent from the meeting.

If you would like a photo of your loved one included in a montage, please send a photo in JPEG format as an attachment to mstrachan@rosebudfunerals.com.au Remember to include your name and phone number in the email. Alternatively, drop the photo oﬀ at our Rosebud office