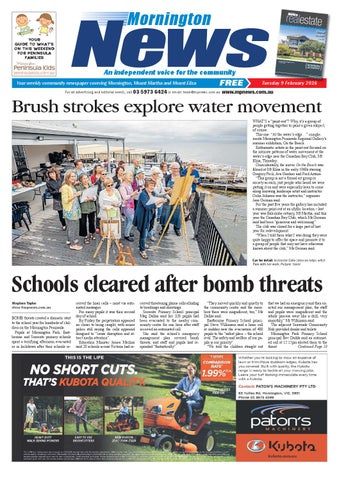 Brush strokes explore water movement WHAT’S a “paint-out”? Why, it’s a group of people getting together to paint a given subject, of course. This one: “At the water’s edge…” complements Mornington Peninsula Regional Gallery’s summer exhibition, On the Beach. Enthusiastic artists in the paint-out focused on the intricate patterns of water movement at the water’s edge near the Canadian Bay Club, Mt Eliza, Thursday. Coincidentally, the movie On the Beach was filmed at Mt Eliza in the early 1960s starring Gregory Peck, Ava Gardner and Fred Astaire. “This group is not a formal art group or society as such, just people who heard we were putting it on and were especially keen to come along knowing landscape artist and instructor Colin Johnson was the instructor,” organiser Jane German said. For the past five years the gallery has included a summer paint-out at an idyllic location – last year was Balcombe estuary, Mt Martha, and this year the Canadian Bay Club, which Ms German said had been “generous and welcoming”. The club was closed for a large part of last year for redevelopment. “When I told them what I was doing they were quite happy to offer the space and promote it to a group of people that may not have otherwise known about the club,” Ms German said. Eye for detail: Instructor Colin Johnson helps artist Pam with her work. Picture: Yanni

Schools cleared after bomb threats Stephen Taylor steve@mpnews.com.au BOMB threats created a dramatic start to the school year for hundreds of children on the Mornington Peninsula. Pupils at Mornington Park, Eastbourne and Sorrento primary schools spent a terrifying afternoon evacuated or in lockdown after their schools re-

ceived the hoax calls – most via automated messages. For many pupils it was their second day of school. By Friday the perpetrators appeared no closer to being caught, with senior police still saying the calls appeared designed to “cause disruption and attract media attention”. Education Minister James Merlino said 20 schools across Victoria had re-

ceived threatening phone calls alluding to bombings and shootings. Sorrento Primary School principal Meg Dallas said her 320 pupils had been evacuated to the nearby community centre for one hour after staff received an automated call. She said the school’s emergency management plan covered bomb threats, and staff and pupils had responded “fantastically”.

“They moved quickly and quietly to the community centre and the members there were magnificent, too,” Ms Dallas said. Eastbourne Primary School principal Steve Wilkinson said a hoax call at midday saw the evacuation of 400 pupils to the “safest place – the school oval. The safety and welfare of our pupils is our priority”. “We told the children straight out

that we had an emergency and then enacted our management plan; the staff and pupils were magnificent and the whole process went like a drill, very smoothly,” Mr Wilkinson said. The adjacent Seawinds Community Hub provided drinks and toilets. Mornington Park Primary School principal Bev Dadds said an automated call at 12.15pm alerted them to the threat. Continued Page 10