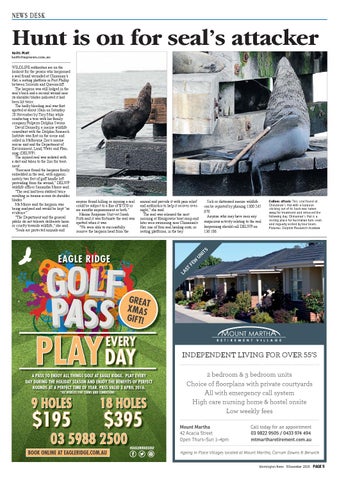 Hunt is on for seal’s attacker Keith Platt keith@mpnews.com.au

anyone found killing or injuring a seal could be subject to a fine of $7350 or six months imprisonment or both." Marine Response Unit vet Sarah Frith said it was fortunate the seal was spotted when it was. "We were able to successfully remove the harpoon head from the

Sick or distressed marine wildlife can be reported by phoning 1300 245 678. Anyone who may have seen any suspicious activity relating to the seal harpooning should call DELWP on 136 186.

animal and provide it with pain relief and antibiotics to help it recover overnight,” she said. The seal was released the next morning at Blairgowrie boat ramp and later seen swimming near Chinaman's Hat, one of four seal hauling-outs, or resting platforms, in the bay.

Callous attack: This seal found at Chinaman’s Hat with a harpoon sticking out of its back was taken away for treatment and released the following day. Chinaman’s Hat is a resting place for Australian fure seals and reguarly visited by tour boats. Pictures: Dolphin Research Institute

WILDLIFE authorities are on the lookout for the person who harpooned a seal found wounded at Chinaman’s Hat, a resting platform in Port Phillip between Sorrento and Queenscliff. The harpoon was still lodged in the seal’s back and a second wound near its shoulder blades indicated it had been hit twice. The badly bleeding seal was first spotted at about 10am on Saturday 28 November by Troy Muir while conducting a tour with his family company Polperro Dolphin Swims. David Donnelly, a marine wildlife consultant with the Dolphin Research Institute was first on the scene and called in Melbourne Zoo’s marine rescue unit and the Department of Environment, Land, Water and Planning (DELWP). The injured seal was sedated with a dart and taken to the Zoo for treatment. "Rescuers found the harpoon firmly embedded in the seal, with approximately two feet of gaff handle left protruding from the wound," DELWP wildlife officer Samantha Moore said. "The seal had been stabbed twice resulting in trauma across its shoulder blades." Ms Moore said the harpoon was being analysed and would be kept “as evidence”. "The Department and the general public do not tolerate deliberate harm or cruelty towards wildlife," she said. "Seals are protected animals and

A PASS TO ENJOY ALL THINGS GOLF AT EAGLE RIDGE. PLAY EVERY DAY DURING THE HOLIDAY SEASON AND ENJOY THE BENEFITS OF PERFECT ROUNDS AT A PERFECT TIME OF YEAR. PASS VALID 3 APRIL 2016. *SEE WEBSITE FOR TERMS AND CONDITIONS