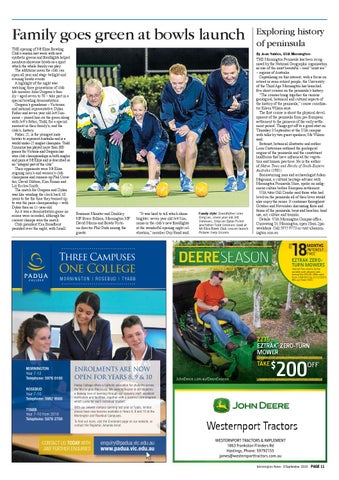 Exploring history of peninsula By Joan Yalden, U3A Mornington THE Mornington Peninsula has been recognised by the National Geographic organisation as one of the most beautiful â&amp;#x20AC;&amp;#x201C; read â&amp;#x20AC;&amp;#x153;must seeâ&amp;#x20AC;? â&amp;#x20AC;&amp;#x201C; regions of Australia. Capitalising on this interest, with a focus on retired or semi-retired people, the University of the Third Age Mornington has launched five short courses on the peninsulaâ&amp;#x20AC;&amp;#x2122;s history. â&amp;#x20AC;&amp;#x153;The courses bring together the various geological, botanical and cultural aspects of the history of the peninsula,â&amp;#x20AC;? course coordinator Eileen Wilson says. The first course is about the physical development of the peninsula from pre-European settlement to the pioneers of the early settlement period. Things got off to a good start on Thursday 3 September at the U3A campus with talks by two guest speakers, Ms Wilson said. Botanist, botanical illustrator and author Leon Costerman outlined the geological origins of the peninsula and the constituent landforms that have influenced the vegetation and human practices. He is the author of Native Trees and Shrubs of South-Eastern Australia (1981). Boonwurrung man and archaeologist Adam Magennis, a cultural heritage advisor with Mornington Peninsula Shire, spoke on indigenous culture before European settlement. U3A tutor Gill Condie said those who had lived on the peninsula all of their lives would also enjoy the series. It continues throughout October and November discussing flora and fauna of the peninsula, bays and beaches, land use, art, culture and tourism. Details: U3A Mornington Campus office, Currawong St, Mornington, open 10am-2pm weekdays. Call 5975 9773 or visit u3amornington.com.au

Padua College offers a Catholic education for students across the Mornington Peninsula. We seek to inspire in our students a lifelong love of learning through our dynamic staff, excellent curriculum and facilities, together with a pastoral care program which cares for each individual student.

With our newest campus opening last year at Tyabb, limited places have now become available in Years 8, 9 and 10 at the Mornington and Rosebud Campuses. To find out more, visit the Enrolment page on our website, or contact the Registrar, Amanda Arnot.