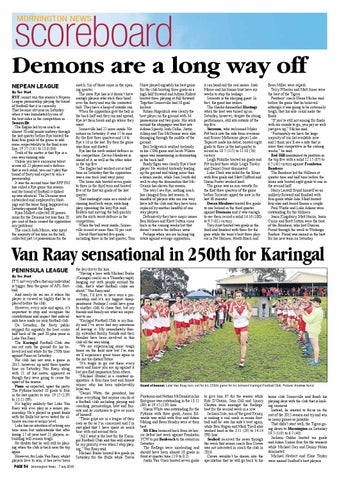 Demons are a long way off NEPEAN LEAGUE

By Toe Punt RYE cannot win this season’s Nepean League premiership playing the brand of football that it is currently. That became obvious on Saturday when it was humiliated by one of the best sides in the competition in Somerville. The Eagles led by as much as almost 70-odd points midway through the last quarter before Rye booted the final four goals of the game to add some respectability to the final score line, 19.17 (131) to 13.6 (84). Truth of the matter is that Rye is a one-way running side. Unless you have enormous talent across all 22 players and a defence that is rock solid, you can’t play this brand of footy and expect to win a premiership. It was the second time that RPP FM has called a Rye game this season and the brand of football it dished up was identical. The Demons were outworked and outplayed by Hastings and the same thing happened on Saturday against the Eagles. Ryan Mullett collected 38 possessions for the Demons but less than 20 per cent of them caused the opposition any problems. The coach Josh Moore, who spent the majority of his time on the ball, collected just 14 possessions for the

match. Six of those came in the opening quarter. The issue Rye has is it doesn’t have enough players who stick their head over the footy and win the contested ball. They have a heap of outside run. When the opposition gets the ball in the back half and they run and spread, Rye let them break and go where they want. Somerville had 22 more inside 50s entries on Saturday. It was 17 to nine for the first three quarters and 14 to Rye’s 16 in the last. By then the game was done and dusted. Rye has the sixth ranked defence in the competition. Devon Meadows is ahead of it, as well as the other sides in the top five. The Eagles had worked out at half time on Saturday that the opposition was a one trick (and way) pony. The home side booted seven goals to three in the third term and booted five of the first six goals of the last quarter. That onslaught came as a result of running hard both ways, switching play, spreading the lazy Rye midfielders and moving the ball quickly into the sixth worst defence in the competition. When the ball went inside, Somerville scored at more than 50 per cent. David Hirst booted five goals, including three in the last quarter, Tom

Shaw played arguably his best game for the club booting three goals as a high half forward and Adrian Ridout booted three playing at full forward. Together Somerville had 10 goal kickers. Rohan Hogenbirk was clearly the best player on the ground with 34 possessions and two goals. His work around the stoppages was first rate. Adrian Speedy, Josh Collie, Justin Allsop and Tim McGennis were also damaging through the middle of the ground. Ben Sedgewick worked tirelessly in his 150th game and Jacob Wilson again was unassuming in dominating in the back half. Brady Egan was clearly Rye’s best player. He worked tirelessly leading up the ground and taking more than a dozen marks, while Sam Smith did well to stop the domination that McGennis has shown this season. The way I see Rye, nothing much has changed from last season. A handful of players who ran one way have left the club and they have been replaced by another handful of one way players. Defensively they have major issues. Ben Holmes and Rhett Sutton come back in the coming weeks but that doesn’t resolve the defence issue. Perhaps when you are kicking big totals against average opposition,

it can band-aid the real issues. Josh Moore and his brains trust have six weeks to stop the leakage. Sorrento is the sleeping giant. In fact, the giant has woken. The Sharks dismantled Hastings when the heat was turned up on Saturday, however, despite the strong performance, still sits outside of the top five. Sorrento, who welcomed Myles Pitt back into the side from overseas and former Melbourne player Luke Tapscott made his debut, booted eight goals to three in the last quarter to record an 18.7 (115) to 11.10 (76) victory. Leigh Poholke booted six goals and Pitt kicked three while Leigh Treeby and Daniel Grant dominated. Luke Clark was solid for the Blues with four goals and Matt Clifford and Shaun Foster worked hard. The game was an arm wrestle for the first three quarters of the game before Sorrento upped the ante in the last 30 minutes. Devon Meadows booted five goals to one behind in the third quarter against Dromana and it was enough to see them record a solid 14.16 (100) to 9.7 (61) victory. Troy Aust booted two goals in the third and finished with three for the gam while the team’s best three players in Pat Harmes, Heath Black and

Beau Miller were superb. Terry Wheeler and Matt Jones were the best of the Tigers. Panthers’ coach Glenn Michie said before the game that he believed although it was going to be extremely tough, that his side could make the finals. “If you’re still not aiming for finals with six rounds to go, you pay as well just give up,” Michie said. “Fortunately we have the large majority of our list available now and I think you’ll see a side that is more than competitive in the coming weeks,” he said. Red Hill maintained its position in the top five with a solid 12.15 (87) to 6.5 (41) victory against Frankston Bombers. The Bombers led the Hillmen at quarter time and half time before the home side booted eight goals to one in the second half. Harry Larwill found himself as an unlikely forward and finished with four goals while Jake Mold booted four also and Jarred Eames a couple. Paul Wintle and Luke Adams were outstanding for the Hillmen. Jason Kingsbury, Matt Harris, Jason Currie and Brett Sutton were the best of the Bombers, who lost Duncan Proud through the week to Wodonga Raiders. Proud was named in the best for his new team on Saturday.

By Toe Punt IT’S not very often that any individual is bigger than the game of AFL football. And rarely do we see it where the player is viewed so highly that he is placed before the club. However, every now and again, it’s important to stop and recognise the contributions and impact that individuals have made on your football club. On Saturday, the footy public stopped for arguably the best centre half back of the past 20-plus years in Luke Van Raay. The Karingal Football Club star ran out onto the ground for his beloved red and white for the 250th time against Pines on Saturday. His club has not won a game in 2015, however, up until three quarter time on Saturday, Van Raay, along with 21 of his mates, appeared as though they were going to cause the upset of the season. Pines, as expected, upset the party. The Pythons booted 10 goals to four in the last quarter to win 19.15 (129) to 13.11 (89). It’s highly unlikely that Luke Van Raay will ever play in a senior premiership. He’s played in grand finals with the Bulls but never tasted the ultimate success at senior level. Luke has no intention of retiring any time soon but understands that after losing 17 of your best 22 players, rebuilding will remain tough. He doubts that he will still be playing when the club is back near the top again. However, for Luke Van Raay, whilst players love to win, it has never been

the key driver for him. “Having a beer with Michael Burke (Karingal coach) on a Thursday night, hanging out with people around the club, that’s what football clubs are about,” Van Raay said. “Sure, I’d love to have won a premiership and it’s my biggest disappointment. Perhaps I could have gone to another club to chase that, but my friends and family are what are important to me. “Karingal Football Club is my family and I’ve never had any intentions of leaving it. My immediately family, extended family, friends and their families have been involved in this club all the way along. “We are experiencing some tough times on the field now but I’m sure we’ll experience great times again in the not too distant future. “It’s tough to go out there every week and know you are up against it but you find inspiration from others. “Michael (Burke) is a constant inspiration. A four-time best and fairest winner who has been unbelievably loyal too. “Daniel Watts, the president, has done everything that anyone can do at a football club including playing and coaching premierships, best and fairests and he continues to give so much of himself. “These guys are in a league of their own as far as I’m concerned and I’m just glad that I have spent so much time with and around them. “All I want is the best for the Karingal Football Club and this will always be my priority, even when I stop playing,” Van Raay said. Michael Burke booted five goals on Saturday for the Bulls while Travis

Puntaroni and Nathan McDonald in his first game was outstanding in the 13.11 (89) to 19.15 (129) loss. Shaun White was outstanding for the Pythons with three goals, Aaron Edwards was solid with four and Adam Maling and Beau Hendry were at their best. Mt Eliza bounced back from its horror defeat last week against Frankston YCW to put Bonbeach to the sword on Saturday. The Redlegs were unrelenting and should have been almost 10 goals in front at quarter time (2.9 to 0.2). Justin Van Unen booted seven goals

to give him 67 for the season while Rob D’Orazio, Sam Gill and Jimmy Clayton were amongst the Redlegs’ best for the second week in a row. Jackson Sole, son of the great Kenny, is making a real mark in senior football and he was his side’s best again, while Ben Hogan and Mark Tyrell also worked hard in the 3.11 (29) to 14.14 (98) loss. Seaford received the news through the week that senior coach Ben Crowe was not interested in coach the club in 2016. Crowe wouldn’t be drawn into the speculation that he will go back to his

home club Somerville and finish his playing days with the club that is looking ominous. Instead, he wanted to focus on the rest of the 2015 season and try and win as many games as possible. That didn’t start well, the Tigers going down to Mornington on Saturday 19.5 (119) to 6.7 (43). Jackson Calder booted six goals and Adam Symes four for the winners while Michael Gay and Danny Nolan dominated. Michael Herbert and Kane Taylor were named Seaford’s best players.