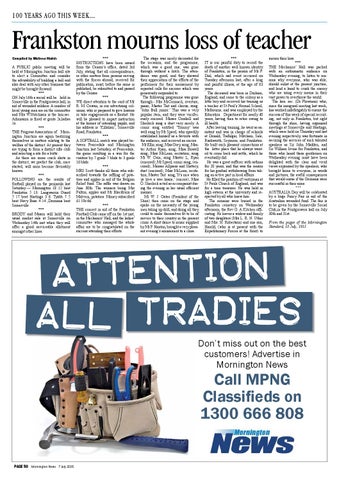 Frankston mourns loss of teacher Compiled by Melissa Walsh A PUBLIC public meeting will be held at Mornington Junction hall site to elect a Committee and consider the advisability of building a hall and also deal with any other business that might be brought forward. *** ON July 16th a social will be held in Somerville in the Fruitgrowers hall, in aid of wounded soldiers. A number of local young men are on the committee and Mrs W.Hutchison is the hon.sec. Admission is fixed at gents 2s,ladies 1s. *** THE Progress Association of Mornington Junction are again bestirring themselves in matters relating to the welfare of the district. At present they are trying to form a district rifle club and selecting a site for a butts. As there are some crack shots in the district, we predict the club, once started, will soon become favorably known. *** FOLLOWING are the results of football played on the peninsula last Saturday:— Mornington 18 12 beat Frankston 5 13: Langwarrin Guard 5 17 beat Hastings 3 6: Tyabb 7 5 beat Navy Base 4 14 ,Dromana beat Somerville. *** BRODY and Mason will hold their usual market sale at Somerville on Wednesday 14th inst when they will offer a good serviceable allotment amongst other lines.

*** INSTRUCTIONS have been issued from the Censor’s office, dated 3rd July, stating that all correspondence, or other matters from persons serving with the forces abroad, received for publication, must, before the same is published, be submitted to and passed by the Censor. *** WE direct attention to the card of Mr R. M. Cowan, in our advertising columns, who is prepared to give lessons or take engagements as a flautist. He will be pleased to impart instruction at the homes of intending pupils, and his address is ‘Killalian’, Somerville Road, Frankston. *** A SOFTBALL match was played between Pearcedale and Mornington Junction last Saturday, at Pearcedale, the game resulting in a win for the visitors by 7 goals 7 bhds to 3 goals 16 bhds. *** MRS Scott thanks all those who subscribed towards the raffling of potatoes and apples in aid of the Belgian Relief fund. The raffle was drawn on June 30th. The winners being Mrs Fulton, apples and Mr Blackburn of Malvern, potatoes. Money subscribed £1 19s 6d. *** THE concert in aid of the Frankston Football Club came off on the 1st inst, in the Mechanics’ Hall, and the ladies’ committee who managed the whole affair are to be congratulated on the success attending their efforts.

The stage was nicely decorated for the occasion, and the programme, which was a good one, was gone through without a hitch. The attendance was good, and they showed their appreciation of the efforts of the performers for their amusement by repeated calls for encores which was generously responded to. The following programme was gone through:- Mrs McCormack, overture, piano; Master Tait and chorus, song. ‘John Bull junior.’ This was a very popular item, and they were vociferously encored. Misses Croskell and Sherlock sang a duet very nicely. A comic song entitled ‘Tommy’ was well sung by Mr Speed, who speedily established himself as a favorite with the audience, and received an encore. Mr Ellis, song; Miss Grey, song; Master Arthur Ryan, song; Miss Bowell song; Miss McLean, recitation; song Mr W. Cain; song Master L, Ryan (encored); Mr Speed, comic song, (encored); Messes Allpress and Slattery, duet (encored); Miss McLean, recitation; Master Tait song,’It’s nice when ye love a wee lassie,’ (encore); Miss O. Sherlock acted as accompanist during the evening in her usual efficient manner. Mr W. J. Oates (President of the Shire) then came on the stage and spoke on the necessity of the young men taking up drill, and doing all they could to make themselves fit to be of service to their country in the present crisis. A short dance to music supplied by Mr F. Hanton, brought a very pleasant evening’s amusement to a close.

*** IT is our painful duty to record the death of another well known identity of Frankston, in the person of Mr P. Dial, which sad event occurred on Tuesday afternoon last, after a long and painful illness, at the age of 63 years. The deceased was born in Durham, England, and came to the colony as a little boy and received his training as a teacher at St Paul’s Normal School, Melbourne, and was employed by the Education Department for nearly 40 years, having then to retire owing to ill health. After leaving training, he went as assistant and was in charge of schools at Donald, Trafalgar, Mitcham, Sale, Rushworth, Seymour, and Frankston. He built such pleasant connections at the latter place that he always wanted to come back and settle, which he eventually did. He was a great sufferer with asthma for 20 years, and this was the reason for his gradual withdrawing from taking an active part in local affairs. He filled the position of vestryman at St Pauls Church of England, and was for a time treasurer. He was held in high esteem at the university and respected by all who knew him. The remains were buried in the Frankston cemetery on Wednesday afternoon, the Rev G. A.Kitchen officiating. He leaves a widow and family of two daughters (Mrs L. R. N. Uther and Mrs. H. Robertson) and one son, Harold, (who is at present with the Expeditionary Forces at the front) to

*** THE Mechanics’ Hall was packed with an enthusiastic audience on Wednesday evening, to listen to reasons why everyone, who was able, should enlist at the present juncture, and lend a hand to crush the enemy who are using every means in their vast power to overthrow the world. The hon. sec. (Dr Plowman) who, since the inaugural meeting last week, has worked indefatigably to ensure the success of this week of special recruiting, not only in Frankston, but right through the shire, having organised meetings at Somerville and Hastings, which were held on Thursday and last evening respectively, was fortunate in securing the services of such talented speakers as Sir John Madden, and Sir William Irvine for Frankston, and those who heard these gentlemen on Wednesday evening must have been delighted with the clear and vivid views expressed by the speakers, who brought home to everyone, in words and pictures, the awful consequences that would ensue if the Germans were successful in their aims. *** AUSTRALIA Day will be celebrated by a huge Fancy Fair in aid of the Australian wounded fund. The fair is to be given by the Somerville Social Club,in the Fruitgrowers hall on July 30th and 31st. From the pages of the Mornington Standard, 10 July, 1915