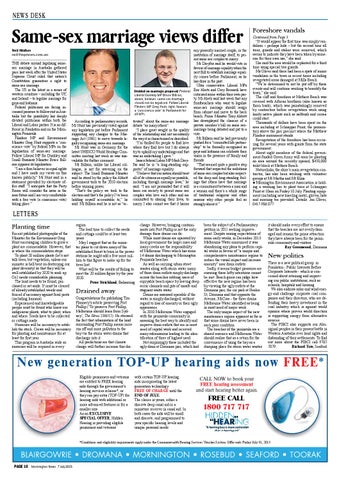 Same-sex marriage views differ Neil Walker neil@mpnews.com.au THE debate around legalising samesex marriage in Australia gathered pace last week after the United States Supreme Court ruled that nation’s Constitution guarantees a right to same-sex marriage. The US is the latest in a series of western countries – including the UK and Ireland – to legalise marriage for gays and lesbians. Federal politicians are facing increased pressure to follow suit in Australia but the possibility has deeply divided politicians within both the Liberal and Labor parties. It is no different in Frankston and on the Mornington Peninsula. Flinders MP and Environment Minister Greg Hunt supports a ‘conscience vote’ by federal MPs on the legalisation of same-sex marriage. Fellow Liberal MP for Dunkley and Small Business Minister Bruce Billson opposes its legalisation. “I am a firm believer in equal rights and I have made my views on this known publicly,” Mr Hunt said in a statement provided by electorate office staff. “I anticipate that the Party Room will consider the issue in the near future and I am very comfortable with a free vote (a conscience vote) taking place.”

According to parliamentary records, Mr Hunt has previously voted against any legislation put before Parliament supporting any changes to the Marriage Act (1961) to move towards legally recognising same-sex marriage. Mr Hunt was in Germany for the latest UNESCO World Heritage Committee meeting last week so was unavailable for further comment. Mr Billson, unlike his Liberal colleague, is not for wavering on the subject. The Small Business Minister said he stood by the policy the Abbott government took to the 2010 election before winning power. “That’s the policy we took to the election and that’s the policy I’ve been holding myself accountable to,” he said. Mr Billson said he is not as “ac-

any presently married couple, or the institution of marriage itself, to permit same sex couples to marry. Mr Dreyfus said he would vote in favour of marriage equality when the next Bill to establish marriage equality comes before Parliament, as he has done in the past. Ultra conservative Liberal MPs Divided on marriage proposal: Federal Eric Abetz and Cory Bernardi have criticised some within their own parLiberal Dunkley MP Bruce Billson, ty. Mr Abetz said last week that any above, believes same-sex marriage should not be legalised. Fellow Liberal frontbenchers who want to legalise Flinders MP Greg Hunt, right, favours same-sex marriage should resign a ‘conscience vote’ in Parliament for from cabinet and move to the back all MPs. bench. Prime Minister Tony Abbott tivated” about the same-sex marriage has downplayed the chances of a private member’s bill on same sexdebate “as many others”. “I place great weight in the quality marriage being debated and put to a of the relationship and not necessarily vote. Mr Billson said he had previously the way it is characterised or described. “I’m thrilled for people to find love pushed for a “committed life partnerwhere they find love but I do always ship” to be formally recognised so try to uphold my undertakings and that gays and lesbians can celebrate their union in the presence of family and was an undertaking I gave.” Isaacs federal Labor MP Mark Drey- friends. “That seemed quite a positive step fus said he is “a long-standing supforward that respected the ambitions porter” of marriage equality. “I believe that our nation should treat of same-sex couples but also respectall of its citizens as equally as possible, ed the deep and long-standing feelincluding through marriage laws,” he ings that others have that marriage said. “I am not persuaded that it will is a commitment between a man and harm our society to permit same sex a woman and there’s a whole range couples who love each other and are of traditional religious and other committed to sharing their lives, to reasons why other people feel so marry. I also cannot see that it harms strongly about it.”

Foreshore vandals Continued from Page 3 “It would appear the first time was simply vandalism – perhaps kids – but the second time all trees, guards and stakes were removed, which seems to indicate they have been taken by someone for their own use,” she said. She said the area would be replanted for a third time using special tree guards. Ms Oliver said there had been a spate of minor vandalism in the town in recent times including revegetated areas damaged at Mills Beach. “We’re determined to not be put off by these events and will continue working to beautify the town,” she said. The cliff and foreshore at Mothers Beach was covered with African boxthorn (also known as thorn bush), which was painstakingly removed by contractors before revegetation work using hardy native plants such as saltbush and correa could start. Thousands of dollars have been spent on the area including at Schnapper Point, the promontory above the pier precinct where the Matthew Flinders monument stands. Revegetation of the foreshore has been occurring for several years with grants from the state government. About eight members of the federal government-funded Green Army will soon be planting an area around the recently opened, $450,000 toilet block at Mothers Beach. Naturelinks, the shire’s main revegetation contractor, has also been working with volunteer groups at Mt Martha and Mt Eliza. n Mornington Environment Association is holding a working bee to plant trees at Schnapper Point at 10am on Friday 10 July. Planting equipment (including new kneeling mats), gloves, hats and morning tea provided. Details: Jan Oliver, 0417 986 077.

LETTERS Planting time Recent published photographs of the Minister for the Environment Greg Hunt encouraging children to grow a plant are commendable. However, that is where the commendation stops. To plant 20 million plants (let’s not talk trees, but vegetation, unless our minister is hell bent on destroying our plant diversity) so that they will be well established by 2020 to soak up Co2 needs considerable planning. The land needs to be found, purchased or set aside. It must be cleared of already established weeds and fenced if necessary against feral pests (including humans). Experienced and knowledgeable people must be found who know our indigenous plants, what to plant, when and where. Seeds have to be collected or cuttings made. Nurseries will be necessary to establish the stock. Crews will be necessary for planting and maintenance for at least the first year. This program is Australia wide so nurseries will be required in every

region. The lead time to collect the seeds and cuttings could be at least two years May I suggest that as the minister plans to cut down many of the established forest to burn in the power stations he might add a few more million to this figure to make up for the trees lost. What will be the results of failing to meet the 20 million figure by the year 2020. Peter Strickland, Balnarring

Drained away Congratulations for publishing Tim Flannery’s article preserving Port Phillip (‘To preserve Port Phillip, Melbourne should learn from Sydney’, The News 23/6/15). He stressed the fact that urbanisation of the land surrounding Port Phillip means more run off and more pollution to the bay via the storm water drains that discharge into it. All predictions are that climate change will further increase this dis-

charge. However, bringing contaminants into Port Phillip is not the only damage these drains can do. While most drains are operated by local government the larger ones and many creeks are the responsibility of Melbourne Water which has some 14 drains discharging to Mornington Peninsula beaches. As well as carrying urban street wastes along with storm water many of these drain outlets simply discharge across the beaches robbing users of enjoyable beach space by leaving deep scour channels and pits of unsafe and stagnant waste water. Drains are assessed operable if the water is simply discharged, without regard to loss of amenity or their ugly appearance. In 2010 Melbourne Water engaged with the peninsula community in assessing the best way to identify and improve drain outlets that are in most need of capital work and received many submissions leading to the identification of three of highest need. Not surprisingly these included the ugly drain at Dromana pier, which had

been the subject of a Parliamentary petition in 2011 seeking improvement. Despite raising expectations of some early works, in December 2013 Melbourne Water announced it was abandoning any plans to perform capital works in favour of “a unique and comprehensive maintenance regime to reduce the visual impact and increase amenity” near drain outlets. Sadly, it seems budget pressures are ensuring these lofty intentions cannot be met. Beach goers can judge how effective the new regime has been by viewing the ugly outlets at the Dromana pier, the car park at Heales St, Dromana and that opposite the Avenue, McCrae - the three drains Melbourne Water identified as being in most need of major work. The only unique aspect of the new maintenance regime apparent so far is that some drains have never been in such poor condition. The beaches of the peninsula are a shared resource and Melbourne Water should realise that as a return for the convenience of using the bay as a dumping place for storm water wastes

it should make every effort to ensure that the beaches are not overly damaged and remain the prime attraction they have always been for the peninsula community and visitors. Ray Greenwood, Dromana

New politics There is a new political group in Frankston - Public Interests Before Corporate Interests - which is concerned about retaining and improving our public institutions, such as schools, hospitals and housing. We also endorse solar and wind energy and challenge corporate coal companies and their directors, who are defending their heavy investment in the coal industry which is against world opinion where proven world direction is supporting energy from alternative sources. The PIBCI also supports our Aboriginal peoples in their present battle in Western Australia over land rights and disbanding of their settlements. To find out more about the PIBCI call 9785 7079. Richard Tate, Seaford

with certain hearing needs to beTOP-UP experienced to be aids incorporating the islatest appreciated, which why we’re generation offering atechnology FREE TRIAL to the FREE OFpeople CHARGE until theto rst 50 who respond END OF JULY. this offer. Hear and enjoy the The choice isfor yours, eitherYou a will difference yourself. discrete deep canal aid or a be impressed. miniature receiver in canal aid. In As an EXCLUSIVE short term both cases theOFFER, aids will Hidden be small SPECIAL andHearing discrete, programmed is and providing eligibleto your specific hearing levels pensioners and veterans and unique personal needs.