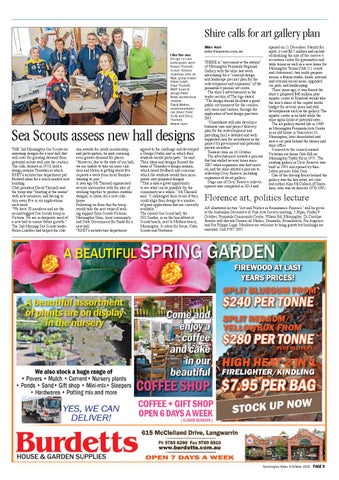 Sea Scouts assess new hall designs THE 2nd Mornington Sea Scouts are assessing designs for a new hall that will cater for growing demand from potential scouts well into the century. The club, formed in 1953, held a design session Thursday at which RMIT’s architecture department put forward ideas for a much-needed new building. Club president David Thornell said the troop was “bursting at the seams” with new members, and having to turn away five or six applications each week. “We have 70 members and are the second biggest Sea Scouts troop in Victoria. We are in desperate need of a new hall to ensure future growth.” The 2nd Morning Sea Scouts leader Helen Lulofser had helped the club

win awards for youth membership and participation, he said, ensuring even greater demand for places. “However, due to the state of our hall, we are unable to take on more children and Helen is getting about five requests a week from local families wanting to join.” A year ago Mr Thornell approached several universities with the idea of working together to produce suitable designs, or ideas, for a new clubhouse. Following on from this the troop would take the next steps of seeking support from Scouts Victoria, Mornington Shire, local community and State Government for funds for a new hall. “RMIT’s architecture department

agreed to the challenge and developed a Design Studio unit in which their students would participate,” he said. Their ideas and designs formed the basis of Thursday’s design session, which heard feedback and concerns which the students would then incorporate into proposed designs. “This is also a great opportunity to see what can be possible for the community as a whole,” Mr Thornell said. “I challenged them to see if they could align their design to a number of grant applications that are currently available.” The current Sea Scout hall, the SSS Seafire, is on the beachfront at Scouts beach, next to Mothers beach, Mornington. It caters for Joeys, Cubs, Scouts and Venturers.

Mike Hast mike@mpnews.com.au THERE is “movement at the station” of Mornington Peninsula Regional Gallery with the shire last week advertising for a “concept design and landscape precinct plan for the redevelopment and expansion” of the peninsula’s premier art centre. The shire’s advertisement in the tender section of The Age stated: “The design should facilitate a good public environment for the community users and visitors, through the application of best design practises [sic]. “Consultants will also develop a business case and project delivery plan for the redevelopment and providing [sic] a detailed and wellsupported case for investment in the project by government and potential private investors.” Tenders close on 16 October. The advertisement restarts a process that has stalled several times since 2007 when expansion was first mooted, and the shire started a process to redevelop Civic Reserve including expansion of its art gallery. Stage one of Civic Reserve redevelopment was completed in 2014 and

opened on 11 December. Mainly for sport, it cost $8.5 million and included doubling the size of the reserve’s recreation centre for gymnastics and table tennis as well as a new home for Mornington Tennis Club (12 courts and clubrooms), two multi-purpose rooms, a fitness studio, kiosk, internal and external social areas, upgraded car park, and landscaping. Three years ago, it was feared the shire’s proposed $40 million plus aquatic centre at Rosebud would take the lion’s share of the capital works budget for several years and stall developments such as the gallery. The aquatic centre is on hold while the shire again looks at potential sites. The art gallery started life in 1969 as Mornington Peninsula Arts Centre in an old house in Vancouver St, Mornington, later demolished and now a car park behind the library and shire office. It moved to the council-owned Victorian era house Oak Hill on Mornington-Tyabb Rd in 1971. The existing gallery in Civic Reserve was built in 1991 and opened by then Labor premier John Cain. One of the driving forces behind the gallery was the late artist, art critic and author Alan McCulloch of Shoreham, who was its director 1970-1992.