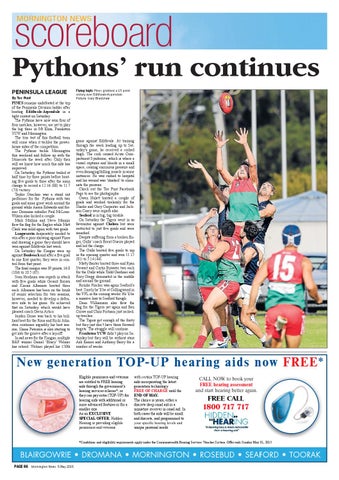 Pythons’ run continues PENINSULA LEAGUE By Toe Punt PINES remains undefeated at the top of the Peninsula Division ladder after beating Edithvale-Aspendale in a tight contest on Saturday. The Pythons have now won four of four matches, however, are yet to play the big three in Mt Eliza, Frankston YCW and Mornington. The true test of this football team will come when it tackles the powerhouse sides of the competition. The Pythons tackle Mornington this weekend and follow up with the Stonecats the week after. Only then will we know how much this side has improved. On Saturday, the Pythons trailed at half time by three points before booting five goals to three after the main change to record a 12.16 (88) to 11.7 (73) victory. Taylor Strachan was a stand out performer for the Pythons with two goals and some great work around the ground while Aaron Edwards and former Dromana onballer Paul McLeanWilson also kicked a couple. Mark Mullins and Steve Mannix flew the flag for the Eagles while Matt Clark was solid again with two goals. Langwarrin desperately needed to win after a poor showing against Pines and drawing a game they should have won against Edithvale last week. On Saturday the Kangas were up against Bonbeach and after a five goal to one first quarter, they were in control from that point. The final margin was 39 points, 16.8 (104) to 10.5 (65). Sean Herdman was superb in attack with five goals while Gerard Brown and Kieran Albanese booted three each. Albanese has been on the brink of senior selection for two seasons, however, needed to develop a defensive side to his game. He achieved that on Saturday, which would have pleased coach Gavin Artico. Jayden Grose was back to his brilliant best for the Roos and Ricki Johnston continues arguably his best season. Shane Paterson is also starting to get into the groove after a lay-off. In sad news for the Kangas, multiple B&F winner Daniel ‘Bluey’ Wehner has retired. Wehner played his 150th

game against Edithvale. At training through the week leading up to Saturday’s game, he received a corked thigh. The cork caused Acute Compartment Syndrome, which is where a vessel ruptures and bleeds in a small space, causing enormous pressure and even damaging/killing muscle in some instances. He was rushed to hospital and his wound was ‘slashed’ to eliminate the pressure. Check out the Toe Punt Facebook Page to see the photographs. Owen Hulett booted a couple of goals and worked tirelessly for the Sharks and Gary Carpenter and Jackson Casey were superb also. Seaford is in big, big trouble. On Saturday the Tigers went in as favourites against Chelsea but were restricted to just five goals and were smashed. Despite suffering from a broken finger, Gulls’ coach Brent Guerra played and led the charge. The Gulls booted five goals to zip in the opening quarter and won 11.15 (81) to 5.14 (44). Matty Baxter booted three and Ryan Stewart and Curtis Bywater two each for the Gulls while Todd Gardiner and Rory Gregg dominated in the middle and around the ground. Rourke Fischer was again Seaford’s best. Surely he’ll be at Collingwood in the VFL in the coming weeks. He’ll be a massive loss to Seaford though. Dean Williamson also flew the flag for the Tigers yet again and Ben Crowe and Chris Fortnam just rackedup touches. The Tigers get enough of the footy but they just don’t have those forward targets. The struggle will continue. Frankston YCW didn’t play on Satuirday but they will be without stars Ash Eames and Anthony Barry for a number of weeks.

with certain hearing needs to beTOP-UP experienced to be aids incorporating the islatest appreciated, which why we’re generation offering atechnology FREE TRIAL to the FREE OFpeople CHARGE until theto ¿rst 50 who respond END OF MAY. this offer. Hear and enjoy the The choice isfor yours, eitherYou a will difference yourself. discrete deep canal aid or a be impressed. miniature receiver in canal aid. In As an EXCLUSIVE short term both cases theOFFER, aids will Hidden be small SPECIAL andHearing discrete, programmed is and providing eligibleto \RXUVSHFL¿FKHDULQJOHYHOVDQG pensioners and veterans unique personal needs.