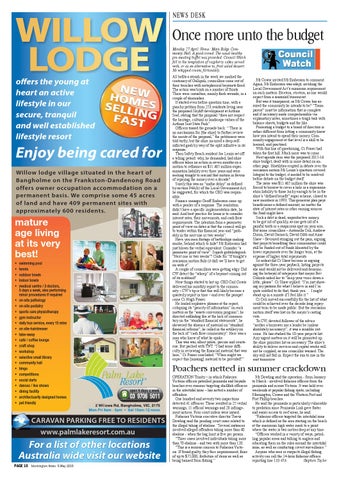 Once more unto the budget Monday 27 April. Venue: Main Ridge Community Hall. A good crowd. The usual healthy pre-meeting buffet was provided. Council Watch fell to the temptation of raspberry cakes served with, or as an alternative to, fruit salad dessert. No whipped cream, fortunately.

offers the young at heart an active lifestyle in our secure, tranquil and well established lifestyle resort

Enjoy being cared for Willow lodge village situated in the heart of Bangholme on the Frankston-Dandenong Road offers owner occupation accommodation on a permanent basis. We comprise some 45 acres of land and have 409 permanent sites with approximately 600 residents.

AS befits a stoush in the week we marked the centenary of Gallipoli, councillors came out of their trenches with metaphorical bayonets fixed. The action was brisk on a number of fronts. There were casualties, mainly flesh wounds, in a couple of skirmishes. It started even before question time, with a punchy petition from 253 residents living near the proposed Skylift development at Arthurs Seat, stating that the proposal “does not respect the heritage, cultural or landscape values of the Arthurs Seat State Park”. Officers tossed the grenade back: “ There is no mechanism for [the shire] to further review the merits of the proposal,” the petitioners were told tartly; but the shire incurred a deep selfinflicted gash by way of the split infinitive in its response. Then Safety Beach resident Joe Lenzo set off a telling petard: why, he demanded, had shire officers taken no action in seven months on a motion to refinance an $11.465 million superannuation liability over three years and were seeking tonight to rescind that motion in favour of repaying the money over a decade? Surely this was an “undue delay” as defined by section 94A(b) of the Local Government Act, he suggested, for which the CEO was responsible. Finance manager Geoff Emberson came up with a pearler of a response. The resolution didn’t have a specific implementation date, he said. And best practice for loans is to consider interest rates, their movements, and cash flow requirements. The intention from a parameter point of view on dates is that the council will go to tender within this financial year and “probably in the next one or two weeks”. Have you seen footage of battleships making smoke, behind which to hide? Mr Emberson had just blown the verbal equivalent. Consider “a parameter point of view”. Superb gobbledegook. “Next one or two weeks”? Code for “If tonight’s rescission motion fails (it did) we’ll have to get on with it”. A couple of councillors were getting edgy. Did CW detect the “wheep” of a bayonet coming out of its scabbard? Now things started to hot up. CEO Carl Cowie delivered his monthly report to the community – CW’s tip is that this will likely become a quarterly report in time – and over the parapet came Cr Hugh Fraser. He hurled explosive phrases at the report, critiquing its “paucity of information” on such matters as the “assets conversion program”; he directed enfilading fire at the lack of commentary on the “standard financial statements”; he skewered the absence of material on “standard financial reforms”; he called in the artillery on the lack of “cash flow commentary”. Here was a man who knew of what he spoke. This was war, albeit polite, precise and courteous. But packed with TNT. “I had some difficulty in reviewing the financial material that was here,” Cr Fraser concluded. “When might we expect this [missing] material to be provided?”

Mr Cowie invited Mr Emberson to comment. Again, Mr Emberson was adept, invoking the Local Government Act’s minimum requirement on such matters. Etcetera, etcetera, as one would expect from a seasoned bureaucrat. But was it transparent, as Mr Cowie has assured the community he intends to be? “Transparent” must be information that is complete and if necessary made comprehensible via explanatory notes, sometimes a tough task with balance sheets, budgets and the like. Presenting a budget to a board of directors is rather different from letting a community know how you intend to spend their money. Community engagement at that level is a skill to be learned, and practised. With this line of questioning, Cr Fraser had taken the first hill. Much more was to come. Next agenda item was the proposed 2015-16 shire budget, dealt with in more detail on another page. Hostilities erupted in debate over the rescission motion Mr Lenzo’s question covered. Integral to the budget, it needed to be resolved before debate on the budget itself. The issue was $11.465 million the shire was forced to borrow to cover a hole in a superannuation liability to those lucky enough to be in the shire’s “defined benefit” super scheme, closed to new members in 1993. This generous plan pays beneficiaries a defined amount, no matter the state of interest rates or other earning sources the fund might have. Such a debt is dead, unproductive money, to be got rid of quickly, as one gets rid of a painful tooth or a suspicious spot on your arm. But some councillors – Antonella Celi, Andrew Dixon, David Garnock, David Gibb and Anne Shaw – favoured stringing out the pain, arguing that projects benefiting their communities could still be funded out of funds liberated by the lower repayments over the longer term, at the expense of higher total repayments. So ardent did Cr Shaw become in arguing against the three-year payback, listing projects she said would not be delivered and denouncing the betrayal of ratepayers that mayor Bev Colomb asked her to “keep your voice down a little, please”. Cr Shaw replied: “I’m just showing my passion for what I believe in and I’m quite entitled to do that, thank you … I might stand up in a minute if I feel like it.” Cr Celi moved successfully for the list of what could be achieved over the decade-long repayment term to be made public. But the rescission motion itself was lost on the mayor’s casting vote. To CW, devoted follower of the advice “neither a borrower nor a lender be (unless absolutely necessary)”, it was a sensible outcome. He has studied the 10-year projects list. Any urgent matters on it will be promoted up the shire priorities list as necessary. The shire’s ability to deliver services and capital works will not be crippled, as one councillor warned. The sky will not fall in. Expect the sun to rise in the east tomorrow.

Poachers netted in summer crackdown OPERATION Trinity – in which Fisheries Victoria officers patrolled peninsula and bayside beaches over summer targeting shellfish offences in the intertidal zone – has netted a number of offenders. One hundred and seventy two inspections detected 41 offences. These resulted in 25 verbal warnings, 11 official warnings and 28 infringement notices. Four court orders were issued. Fisheries Victoria executive director Travis Dowling said the pending court cases related to the illegal taking of abalone. “Several instances involved alleged offenders taking more than 40 abalone - when the bag limit is five per person. “Three cases involved individuals taking more than 70 abalone - and two with more than 120. “This is a serious concern to Fisheries Victoria. If found guilty, they face imprisonment, fines of up to $75,000, forfeiture of items as well as being banned from fishing.”

Mr Dowling said the operation - from January to March - involved fisheries officers from the peninsula and across Victoria. It was held over weekends at popular fishing spots, including Mornington, Cowes and the Western Port and Port Phillip beaches. He said the peninsula is particularly vulnerable to predation since Peninsula Link gave faster and easier access to reef areas, he said. “Fisheries officers targeted the intertidal zone which is defined as the area starting on the beach at the maximum high water mark to a point where the water is two metres deep at any time. “Officers worked in a variety of ways, patrolling popular areas and talking to anglers and educating them on the rules around the intertidal zone, as well as conducting covert surveillance.” Anyone who sees or suspects illegal fishing activity can call the 24-hour fisheries offence reporting line 133 474. Stephen Taylor