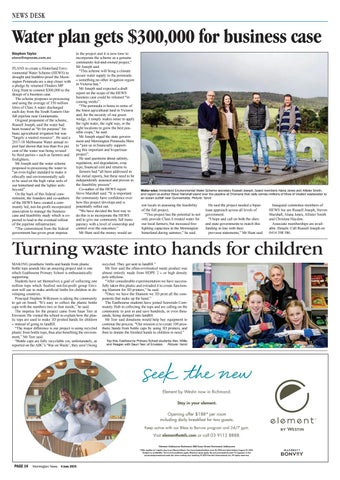 Water plan gets $300,000 for business case Stephen Taylor steve@mpnews.com.au PLANS to create a Hinterland Environmental Water Scheme (HEWS) to drought and bushfire-proof the Mornington Peninsula are a step closer with a pledge by returned Flinders MP Greg Hunt to commit $300,000 to the design of a business case. The scheme proposes re-processing and using the average of 350 million litres of Class A water discharged each day from the South Eastern Outfall pipeline near Gunnamatta. Original proponent of the scheme, Russell Joseph, said the water had been treated as “fit for purpose” for basic agricultural irrigation but was “largely a wasted resource”. He said a 2017-18 Melbourne Water annual report had shown that less than five per cent of the water was being re-used by third parties – such as farmers and firefighters. Mr Joseph said the water scheme proposed re-processing the water to “an even higher standard to make it ethically and environmentally safe to be used on the high value soils of our hinterland and the lighter soils beyond”. On the back of this federal commitment, the founders and co-authors of the HEWS have created a community led, not-for-profit incorporated association to manage the business case and feasibility study which is expected to lead to the eventual rollout of the pipeline infrastructure. “The commitment from the federal government has given great impetus

to the project and it is now time to incorporate the scheme as a genuine community-led-and-owned project,” Mr Joseph said. “This scheme will bring a climate secure water supply to the peninsula – something no other irrigation region in Victoria has.” Mr Joseph said expected a draft report on the scope of the HEWS business case could be released “in coming weeks”. “The peninsula is home to some of the finest agricultural land in Victoria and, for the security of our green wedge, it simply makes sense to apply the right water, the right way, in the right locations to grow the best possible crops,” he said. Mr Joseph urged the state government and Mornington Peninsula Shire to “join us in financially supporting this important and bi-partisan project”. He said questions about salinity, regulation, soil degradation, crop type, financial cost and returns to farmers had “all been addressed in the initial reports, but these need to be independently assessed and proven in the feasibility process”. Co-author of the HEWS report Steve Marshall said: “It is important the community have confidence over how this project develops and is potentially rolled out. “We have decided the best way to do this is to incorporate the HEWS and to give our community full transparency with a level of ownership and control over the outcomes.” Mr Hunt said the money would as-

sist locals in assessing the feasibility of the full project. “This project has the potential to not only provide Class A treated water for our local farmers, but increased firefighting capacities in the Mornington hinterland during summer,” he said.

He said the project needed a bipartisan approach across all levels of government. “I hope and call on both the shire and state governments to match this funding in line with their previous statements,” Mr Hunt said.

Turning waste into hands for children MAKING prosthetic limbs and hands from plastic bottle tops sounds like an amazing project and is one which Eastbourne Primary School is enthusiastically supporting. Students have set themselves a goal of collecting one million tops which Seaford not-for-profit group Envision will use to make artificial limbs for children in developing countries. Principal Stephen Wilkinson is asking the community to get on board. “It’s easy to collect the plastic bottle caps with the numbers two or four inside,” he said. The impetus for the project came from Saun Teer at Envision. He visited the school to explain how the plastic tops are used to make 3D printed hands for children – instead of going to landfill. “The major difference is our project is using recycled plastic from bottle tops, thus also benefiting the environment,” Mr Teer said. “Bottle caps are fully recyclable yet, unfortunately, as reported on the ABC’s ‘War on Waste’, they aren’t being

recycled. They get sent to landfill.” Mr Teer said the often-overlooked waste product was almost entirely made from HDPE 2 – or high density poly-ethylene. “After considerable experimentation we have successfully taken this plastic and extruded it to create functioning filament for 3D printers,” he said. “Once we have the filament we 3D print all the components that make up the hand.” The Eastbourne students have joined Seawinds Community Hub in collecting the tops and are calling on the community to join in and save hundreds, or even thousands, being dumped into landfill. Mr Teer said donations would help buy equipment to continue the process. “Our mission is to create 100 prosthetic hands from bottle caps by using 3D printers, and then to donate the finished hands to children in need.” Top this: Eastbourne Primary School students Alex, Millie and Reagan with Saun Teer, of Envision. Picture: Yanni

seek the new Element by Westin now in Richmond. Stay in your element. Opening offer $188* per room including daily breakfast for two guests. Keep active with our Bikes to Borrow program and 24/7 gym.