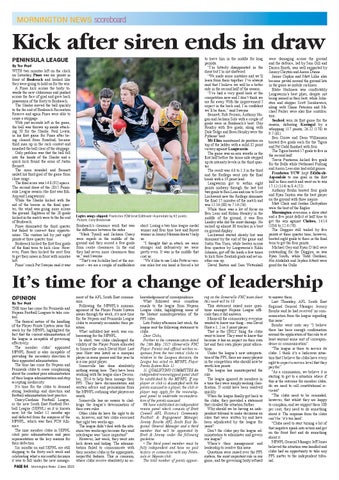 Kick after siren ends in draw PENINSULA LEAGUE By Toe Punt WITH two minutes left on the clock on Saturday, Pines was six points in front of Bonbeach and looked like they were going to hold on for the win. A Pines kick across the body towards the new clubrooms end pushed across the face of goal and gave back possession of the footy to Bonbeach. The Sharks moved the ball quickly to the far end of Bonbeach Recreation Reserve and again Pines were able to cause a stoppage. With just seconds left in the game, the ball was thrown up inside attacking 50 for the Sharks. Paul Lewis, in his first game for Pines after being cleared from Rosebud, became third man up in the ruck contest and smashed the ball clear of the stoppage. Only problem was that the ball fell into the hands of the Sharks and a quick kick found the arms of Justin Bennett. The siren sounded and Bennett nailed his third goal of the game from close range. The final score was 14.8 (92) apiece. The second draw of the 2015 Peninsula League season (the first was EdiAsp and Langwarrin). While the Sharks kicked with the aid of the breeze in the final quarter, the wind was going more across the ground. Eighteen of the 28 goals kicked in the match were to the far end of Bonbeach. Pines dominated the third quarter but failed to convert their opportunities. The visitors led by just eight points at three quarter time. Bonbeach kicked the first four goals of the final term to kick clear. However, Pines then kicked the next four to get their noses in front with minutes left. Pines’ coach Pat Swayne said it was

Bonbeach’s clearance work that was the difference between the sides. “Mark Tyrrell and Jackson Casey were superb in the middle of the ground and they scored a few goals from centre clearances. In the end they had seven more clearances than us,” said Swayne. “That’s our Achilles heel at the moment – we are a couple of midfielders

short. Losing a two time league medal winner and four time best and fairest winner in Jimmy Messina doesn’t help us. “I thought that in attack we were stronger and defensively we were pretty even. It was in the middle that cost us. “We’d like to use Luke Potts in various roles but our hand is forced a bit

to leave him in the middle for long periods. “I’m bitterly disappointed in the draw but I’m not shattered. “We made some mistakes and we’ll learn from them together. I’ve always said that I believe we will be a better side in the second half of the season. “I’ve had a very good look at the competition now and I don’t think we are far away. With the improvement I expect in the back end, I’m confident we’ll be there,” said Swayne. Bennett, Rob Ferraro, Anthony Hogan and Jackson Sole with a couple of goals were in Bonbeach’s best. Guy Hendry with five goals, along with Dale Tedge and Beau Hendry were the Pythons’ best. Mt Eliza maintained its position on top of the ladder with a solid 32 point victory against Langwarrin. The game was an arm wrestle in the first half before the home side stepped up its intensity levels in the third quarter. The result was 4.6 to 1.3 in the third and the Redlegs went into the final break with a 19 point lead. Langwarrin got to within eight points midway through the last but two goals to Ben Lean and one to Scott Lockwood saw the Redlegs dominate the final 15 minutes of the match and win 12.16 (88) to 7.14 (56). While there was a lot of focus on Ben Lean and Rohan Heasley in the middle of the ground, it was Ben Landry who did the most damage. He racked up almost 30 touches in a best on ground display. Lockwood started slowly but was dominant by the end of the game and Justin Van Unen, while beaten across four quarters by Langwarrin’s Rikki Johnson, got off the leash a few times to kick three freakish goals and set another one up. David Barton and Sam Wettenhall

were damaging across the ground and the defence, led by Sam Gill and Darren Booth, was well supported by Jimmy Clayton and Aaron Dunne. James Capkin and Matt Lillie also became pivital around the ground late in the game as mobile ruckmen. Blake Harkness was comfortably Langwarrin’s best plyer, despite not being named in their best, while Johnston and skipper Scott Sienkiewicz, along with Shane Paterson and Michael Parker were also fine contributors. Seaford won its first game for the season, defeating Karingal by a whopping 117 points, 26.22 (178) to 9.7 (61). Ben Crowe and Dean Williamson booted five goals each for the Tigers and Pat Cadd finished with four. The Tigers booted 17 goals to five in the second half. Travis Puntaroni kicked five goals for the Bulls while Nathanael Furlong and Aaron Lees also had solid games. Frankston YCW kept EdithvaleAspendale to one goal in the first half in their match and went on to win 17.12 (114) to 8.4 (52). Anthony Bruhn booted four goals and Ryan Santon was the best player on the ground with three majors. Matt Clark and Jordan Derbyshire were the best of the Eagles. Mornington overcame a slow start and a five point deficit at half time to get the win against Chelsea, 14.14 (104) to 12.4 (76). The Doggies still trailed by five points at three quarter time, however, booted eight goals to three in the final term to get the four points. Michael Gay and Ryan O’dell were outstanding for the Doggies, as was Ryan Smith, while Todd Gardiner, Niz Abdallah and Jayden Attard were good for the Gulls.

It’s time for a change of leadership OPINION

By Toe Punt THE time has come for Peninsula and Nepean Football Leagues to take control. The farsical nature of the handling of the Player Points System issue this week by the MPNFL highlighted the fact that the current administration of the league is incapable of governing effectively. The member clubs’ appointed MPNFL Board is also incapable of providing the necessary direction to their appointed administration. The time has come for Nepean and Peninsula clubs to cease complaining about the constant poor administration of their league administration and stop accepting mediocrity. It’s time for the clubs to demand strong leadership and direction and football administration best practice. Casey-Cardinia Football League, or the new South East Football Netball League (SEFNL) as it is known now, bit the bullet 12 months ago and defected from the auspices of the MPNFL, which was then PCN Alliance. The nine member clubs in SEFNL cited poor administration and poor representation as the key reasons for their defection. Six months on and SEFNL are still skipping to the footy each week and celebrating what a successful decision it was to fall under the new manage-

ment of the AFL South East commission. Following the MPNFL’s mismanagement of the Player Points System issues through the week, it’s now time for the Nepean and Peninsula League clubs to seriously reconsider their position. What unfolded last week was embarressing for the MPNFL. In short, two clubs challenged the vilidity of the Player Points allocated to Somerville coach David Hirst. Last year Hirst was listed as a marquee player in some games and this year he is a one point player. Somerville has done absolutely nothing wrong here. They have been working with the league since December, 2014 to help them manage their PPS. They have documentation and written advice and permissions from the MPNFL outlining what players are worth. Somerville has no reason to challenge the league’s determination of their own rules. Other clubs do have the right to do so, however, and two clubs exercised that right two weeks ago. The league didn’t deal with the situation two weeks ago because they said interleague was “more important”. However, last week, they went into lock down and hiding. The administration failed to communicate with their member clubs in the appropriate, respectful fashion. This is common, where clubs receive absolutely no ac-

knowledgement of correspondence. What followed were countless emails to the league from Nepean League clubs, highlighting areas of the blatant misinterpretation of the PPS rules. Late Friday afternoon last week, the league sent the following statement to clubs. Dear Clubs, Further to the communication dated the 26th May 2015 (Somerville FNC Player Points) and official written responses from the two initial clubs in relation to the Leagues decision, the League has acted on MPNFL Player Points System Rule 11. 11. QUALIFYING COMMITTEE An independent review/appeal panel shall be established by the MPNFL. If any player or club is dissatisfied with the points assessed to a player, the club or player may apply for the review/appeal panel to undertake reconsideration of the points assessed. We have established an independent review panel which consists of Brett Connell AFL Victoria’s Community Football & Engagement Manager, Jeremy Bourke AFL South East Regional General Manager and a third member that will be appointed by Brett & Jeremy under the following guideline. • The third panel member must be fully independent and have no past history or connection with any Peninsula or Nepean club. The total number of points appear-

ing on the Somerville FNC team sheet this week will be 38. This statement raised more questions amongst Nepean League officials than it did answers. Minus all the commentary, everyone wanted to know one thing - was David Hirst a 1, 2 or 3 point player. That is the ONLY thing the clubs want to know. They want to know this because it has an impact on their own list and their own player point allocations. Under the league’s new interpretation of the PPS, there are many players in the competition who should now be worth less points. The league has misinterpreted the rule. The league ignored its members in a time they were simply seeking clarification. It could have been resolved quickly. When the league finally got back to the clubs, they provided a statement that clouded the situation further. Why should we be having an independent tribunal to make decisions on rules that were written by and have been adjudicated by the league for years? Don’t the clubs pay the league administration to administer and govern our league? Where’s their management and leadership to resolve this issue. Questions were raised over the PPS system, the most important rule in our game, and the governing body refused

to answer them. Last Thursday, AFL South East Regional General Manager Jeremy Bourke said he had received’ no communication from the league regarding this issue’. Bourke went onto say “I believe there has been enough confirmation around the application of this rule to at least warrant some sort of correspondence or communication”. “The league is there to service its clubs. I think it’s a ludicrous situation that I believe the clubs have every right to expect a service level that they pay for”. “As a commission, we believe it is starting to get to a situation where if this is the outcome for member clubs, do we need to call constitutional reviews? “The clubs need to be reminded, however, that whilst they are happy to complain, and we support them 100 per cent, they need to do something about it. The response from the clubs can’t be ‘it’s too hard’. “Clubs need to start turning a bit of that negative speak into action and get on the front foot and do something about it. MPNFL General Manager Jeff Jones believed the situation was handled and clubs had an opportunity to take any PPS matter to the independent tribunal.