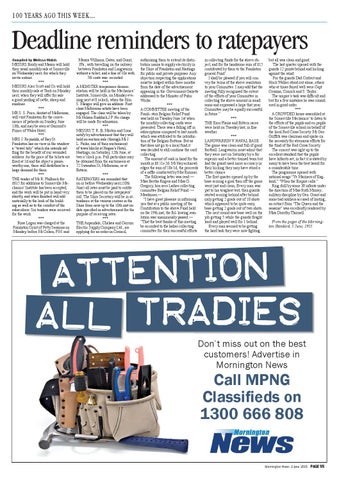 Deadline reminders to ratepayers Compiled by Melissa Walsh MESSRS Brody and Mason will hold their usual monthly sale at Somerville on Wednesday next, for which they invite entries. *** MESSRS Alex Scott and Co will hold their monthly sale at Tanti on Monday next, when they will offer for sale a good yarding of cattle, sheep and sundries. *** MR S. S. Price, dentist of Melbourne, will visit Frankston for the convenience of patients on Sunday, June 13th, and may be seen at Garrood’s Prince of Wales Hotel. *** MRS J. Reynolds, of Bay St Frankston has on view in the window a “towel tidy” which she intends raffling for the benefit of our wounded soldiers. As the price of the tickets are fixed at 1d and the object a praiseworthy one, there will doubtless be a large demand for them. *** THE tender of Mr R. Philbrick for £615 for additions to Somerville Mechanics’ Institute has been accepted, and the work will be put in hand very shortly, and when finished will add materially to the look of the building as well as to the comfort of the subscribers. Six tenders were received for the work. *** Rose Logan was charged at the Frankston Court of Petty Sessions on Monday, before Mr Cohen, P.M. and

Messrs Williams, Oates, and Grant, JPs., with travelling on the railway between Frankston and Langwarrin without a ticket, and a fine of 10s with 7/6 costs was recorded. *** A MONSTER temperance demonstration will be held in the Mechanics’ Institute, Somerville, on Monday evening next at 8 oclock, when the Hon. S. Mauger will give an address. First class Melbourne artists have been engaged. The chair will be taken by Mr Nelson Rudduck,J.P. No charge will be made for admission. *** MESSRS T. R. B, Morton and Sons notify by advertisement that they will hold an auction sale (through Mr J. L. Parks, one of their auctioneers) of town blocks at Hogan’s Hotel, Hastings, on Saturday, 12th June, at two o’clock p.m. Full particulars may be obtained from the auctioneers at 72 Swanston St, Melbourne, or at Bittern. *** RATEPAYERS are reminded that on or before Wednesday next,(10th June) all rates must be paid to entitle them to be placed on the ratepayers’ roll. The Shire Secretary will be in attendance at the various centres in the Shire from now up to the 10th inst on date specified in advertisement for the purpose of receiving rates. *** THE Aspendale, Chelsea and Carrum Electric Supply Company Ltd., are applying for an order-in-Council,

authorising them to extend its distribution mains to supply electricity in the Shire of Frankston and Hastings for public and private purposes. Any objection respecting the applications must be lodged within three months from the date of the advertisement appearing in the Government Gazette addressed to the Minister of Pubic Works. *** A COMMITTEE meeting of the Frank- ston Belgian Relief Fund was held on Tuesday June 1st when the monthly collecting cards were presented. There was a falling off in subscriptions compared to last month which was attributed to the introduction of the Belgian Buttons. But as that does not go to a local fund it was decided to still continue the card collecting. The amount of cash in hand for the month is £6 11s 2d. Mr Hay acknowledges the sum of 18s 1d, the proceeds of a raffle conducted by Mrs Rimmer. The following letter was read:— Miss Bertha Rogers and Miss D. Gregory, hon secs Ladies collecting committee Belgian Relief Fund. — Mesdames,— “I have great pleasure in informing you that at a public meeting of the Contributors to the above Fund held on the 19th inst, the fol- lowing resolution was unanimously passed:— ”That the best thanks of this meeting be accorded to the ladies collecting committee for their successful efforts

in collecting funds for the above object, and for the handsome sum of £15 contributed by them to the Frankston general Fund’. I shall be pleased if you will convey the terms of the above resolution to your Committee. I may add that the meeting fully recognised the extent of the efforts of your Committee in collecting the above amount in small sums and expressed a hope that your Committee may be equally successful in future.” *** THE Emu Plains and Bittern races were held on Tuesday last, in fine weather. *** LANGWARRIN V NAVAL BASE. The game was clean and full of good football. Langwarrin must admit that they were met on Saturday by a far superior and a better trained team but had the guard used more accuracy in their kicking they may have stood a better chance. The first quarter opened up by the base scoring a goal then off the game went just and clean, Every man was put to his toughest test, then guards started scoring behind after behind only getting 2 goals out of 10 shots which appeared to be quite easy, base getting 2 goals out of two shots. The next round saw base well on the job getting 5 while the guards fought hard and played well for 1 behind. Every man seemed to be getting the hard task they were now fighting

but all was clean and good. The last quarter opened with the guards 12 points behind and kicking against the wind. For the guards Dad Corbert and Hock Walker stood out alone, others who at times faired well were Capt Cousins, Conrick and S. Taylor. The umpire’s task was difficult and but for a few mistakes he was considered in good order. *** A CROWDED house assembled at the Somerville Mechanics’ to listen to the efforts of the pupils and ex-pupils of the Somerville school on behalf of the local Red Cross Society. Mr Geo Griffith was chairman and spoke on the necessity for strenuous efforts for the fund of the Red Cross Society. The concert was right up to the excellent standard that the pupils have hitherto set, in fact it is stated by many to have been the best heard for a considerable time. The programme opened with national songs “Ye Mariners of England,” “When the Empire calls.” Ring drill by some 30 infants under the direction of Miss Ruth Murray; military discipline by Gen. Grant and some bad soldiers accused of looting; an extract from “The Queen and the seasons” was excellently rendered by Miss Dorothy Thornell. From the pages of the Mornington Standard, 5 June, 1915