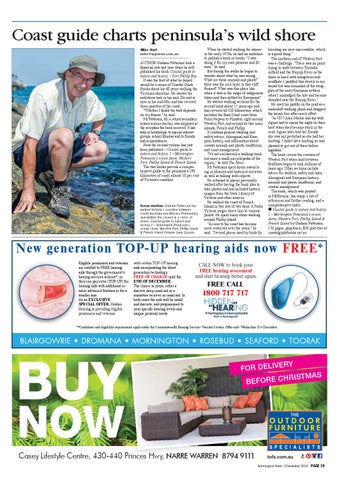 Coast guide charts peninsula’s wild shore Mike Hast mike@mpnews.com.au AUTHOR Graham Patterson took a financial risk last year when he selfpublished his book Coastal guide to nature and history – Port Phillip Bay. It was the first of what he hoped would be a series of Coastal Guide Books about his 40 years walking the Victorian shoreline. He started the ambitious task in his mid-20s and is now in his mid-60s, and has covered three-quarters of the coast. "Whether I finish the task depends on my fitness," he said. Mr Patterson, 66, a retired secondary school science teacher, was surprised at the reception the book received. It has sold in bookshops, to special interest groups, school libraries and to friends and acquaintances. Now the second volume has just been published – Coastal guide to nature and history 2 – Mornington Peninsula's ocean shore, Western Port, Phillip Island & French Island. The two books provide a comprehensive guide to the peninsula's 190 kilometres of coast, almost 10 per cent of Victoria's coastline.

When he started walking the shores in the early 1970s, he had no ambition to publish a book or books. "I was doing it for my own pleasure and fitness," he said. But during the walks he began to wonder about what he was seeing. What are these animals and plants? How was the rock layer in that cliff formed? What was this place like when it was in the range of indigenous tribes and then settled by Europeans? He started walking sections for the second book about 15 years ago and has covered all 320 kilometres, which includes the Bass Strait coast from Point Nepean to Flinders, right around Western Port, and around its two main islands, French and Phillip. It contains general walking and safety advice, Aboriginal and European history, and information about coastal animals and plants, landforms, and coast management. "It's not exclusively a walking book but more a small encyclopedia of the region," he told The News. Mr Patterson spent hours researching in libraries and historical societies as well as talking with experts. He returned to places previously walked after having the book idea to take photos and has included historic images from the State Library of Victoria and other sources. He walked the coast of French Island in two lots of two days. A Parks Victoria ranger drove him to various points. He spent many stints walking around Phillip Island. "Access to the coast has become more restricted over the years," he said. "Several places used by birds for

breeding are now inaccessible, which is a good thing." The northern end of Western Port was a challenge. "There was no point trying to walk between Tooradin airfield and the Bunyip River as the shore is lined with mangroves and mudflats. I paddled this stretch in my kayak but was reminded of the struggles of the early European settlers when I misjudged the tide and became stranded near the Bunyip River." He used his paddle on the mud as a makeshift walking plank and dragged the kayak free after much effort. "In 1857 Alex Mickle and his wife Agnes had to spend the night on their boat when they became stuck in the mud. Agnes later told her friends she was not perturbed as she had her knitting. I didn't have knitting so was pleased to get out of there before nightfall." The book covers the creation of Western Port when land between faultlines began to sink millions of years ago. Other sections include advice for walkers, safety and tides, Aboriginal and European history, animals and plants, landforms, and coastal management. The book, which was printed in Melbourne, has maps, a list of references and further reading, and a comprehensive index.  Coastal guide to nature and history 2 – Mornington Peninsula's ocean shore, Western Port, Phillip Island & French Island by Graham Patterson, 176 pages, paperback, $30 post-free at coastalguidebooks.net.au

with certain hearing needs to beTOP-UP experienced to be aids incorporating the islatest appreciated, which why we’re generation offering atechnology FREE TRIAL to the FREE OFpeople CHARGE until theto ¿rst 50 who respond END DECEMBER. thisOF offer. Hear and enjoy the The choice isfor yours, eitherYou a will difference yourself. discrete deep canal aid or a be impressed. miniature receiver in canal aid. In As an EXCLUSIVE short term both cases theOFFER, aids will Hidden be small SPECIAL andHearing discrete, programmed is and providing eligibleto your speci¿ c hearing levels pensioners and veterans and unique personal needs.