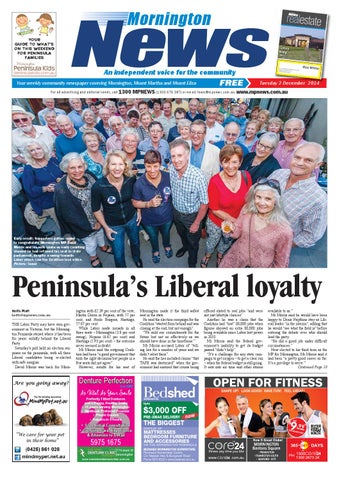 An independent voice for the community Your weekly community newspaper covering Mornington, Mount Martha and Mount Eliza For all advertising and editorial needs, call 1300

Early result: Supporters gather round to congratulate Mornington MP David Morris and his wife Linda as early counting showed he had retained his seat in state parliament, despite a swing towards Labor which saw the Coalition lose office. Picture: Yanni

Peninsula’s Liberal loyalty Keith Platt keith@mpnews.com.au THE Labor Party may have won government in Victoria, but the Mornington Peninsula stayed where it has been for years: solidly behind the Liberal Party. Saturday’s poll held no election surprises on the peninsula, with all three Liberal candidates being re-elected with safe margins. David Morris was back for Morn-

ington with 62.39 per cent of the vote; Martin Dixon in Nepean, with 57 per cent; and Neale Burgess, Hastings, 57.67 per cent. While Labor made inroads in all three seats – Mornington (3.8 per cent swing), Nepean (6.67 per cent) and Hastings (1.93 per cent) – the outcome never seemed in doubt. Mr Morris said the outgoing Coalition had been “a good government that took the right decisions but people in a few seats did not agree”. However, results for his seat of

Mornington made it the third safest seat in the state. He said the election campaign for the Coalition “started from behind and was closing at the end, but not enough”. “We sold our commitments for the future but not as effectively as we should have done in the timeframe.” Mr Morris accused Labor of “telling lies for a number of years and we didn’t rebut them”. He said the lies included claims “that TAFE was destroyed” when the government had ensured that course being

THE BIGGEST DISPLAY OF

offered elated to real jobs “and were not just lifestyle choices”. Another lie was a claim that the Coalition had “lost” 68,000 jobs when figures showed an extra 80,000 jobs being available since Labor lost power in 2010. Mr Morris said the federal government’s inability to get its budget passed “didn’t help”. “It’s a challenge for any state campaign to get oxygen – to get a clear run – when the federal budget is still going. It eats into air time and other stories

available to us.” Mr Morris said he would have been happy to Denis Napthine stay as Liberal leader “in the interim”, adding that he would “see what the field is” before entering the debate over who should lead the party. “He did a good job under difficult circumstances.” Now elected to his third term as the MP for Mornington, Mr Morris said it had been “a pretty good career so far. It’s a privilege to serve.” Continued Page 10