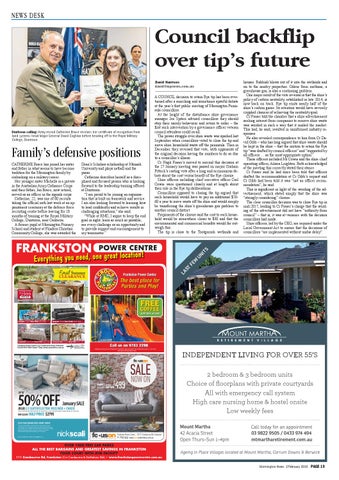 Family’s defensive positions Dean’s Scholars scholarship at Monash University and plays netball and the piano. Catherine describes herself as a disciplined and focused person who is looking forward to the leadership training offered at Duntroon. “I am proud to be joining an organisation that is built on teamwork and service. I am also looking forward to learning how to lead confidently and achieve results in challenging situations,” she said. “While at RMC, I aspire to keep the end goal in sight, learn as much as possible, see every challenge as an opportunity and to provide support and encouragement to my teammates.”

CATHERINE Brace has joined her sister and father in what seems to have become tradition for the Mornington family by embarking on a military career. Her younger sister Michelle is a private in the Australian Army Ordnance Corps and their father, Ian Brace, now retired, served as an officer in the signals corps. Catherine, 22, was one of 60 recruits taking the official oath last week at an appointment ceremony at the defence force recruiting centre before leaving for 18 months of training at the Royal Military College, Duntroon, near Canberra. A former pupil at Mornington Primary School and student at Flinders Christian Community College, she was awarded the

A COUNCIL decision to retain Rye tip has been overturned after a searching and sometimes spiteful debate at the year’s first public meeting of Mornington Peninsula councillors. At the height of the disturbance shire governance manager Joe Spiteri advised councillors they should stop their unruly behaviour and return to order – the first such intervention by a governance officer veteran council attendees could recall. The power struggle over shire waste was sparked last September when councillors voted to close the tip and move shire household waste off the peninsula. Then in December they reversed that vote, with opponents of the original decision having the numbers to do so due to a councillor’s illness. Cr Hugh Fraser’s moved to rescind this decision at the 27 January meeting was passed on mayor Graham Pittock’s casting vote after a long and acrimonious debate about the cost versus benefit of the Rye closure. Shire officers including chief executive officer Carl Cowie were questioned closely and at length about their role in the Rye tip deliberations. Councillors opposed to closing the tip argued that each household would have to pay an additional $5060 a year to move waste off the shire and would simply be transferring the shire’s greenhouse gas problem to another council district. Proponents of the closure said the cost to each household would be somewhere closer to $30 and that the environmental and commercial benefits would far outweigh this. The tip is close to the Tootgarook wetlands and

houses. Rubbish blows out of it into the wetlands and on to the nearby properties. Odour from methane, a greenhouse gas, is also a continuing problem. One major result of the vote reversal is that the shire’s policy of carbon neutrality, established in late 2014, is now back on track. Rye tip emits nearly half of the shire’s carbon gases. Its retention would have severely crippled chances of achieving the neutrality goal. Cr Fraser told the chamber that a shire advertisement seeking interest from companies to remove shire waste was worded in such a way that it misled the market. This had, he said, resulted in uninformed industry responses. He also revealed correspondence to him from Cr David Gibb – who has long argued that shire waste should be kept in the shire – that the motion to retain the Rye tip “was drafted by council officers” and “supported by all officers … as the most appropriate option”. These officers included Mr Cowie and the shire chief operating officer, Alison Leighton. Both acknowledged at the meeting this correctly stated their stance. Cr Fraser said he had since been told that officers drafted the recommendation at Cr Gibb’s request and Cr Gibb had been told it was “not an officer recommendation”, he said. This is significant in light of the wording of the advertisement, which stated simply that the shire was “strongly considering” closure. The clear councillor decision was to close Rye tip in mid-2017, leading to Cr Fraser’s charge that the wording of the advertisement did not have “authority from council” – that is, it was at variance with the decision councillors had made. Shire officers, led by the CEO, are required under the Local Government Act to ensure that the decisions of councillors “are implemented without undue delay”.

100% LEATHER. RECLINE BACK IN THE BEAUTIFUL JULIO. CHOOSE FROM A WIDE RANGE OF COLOURS.