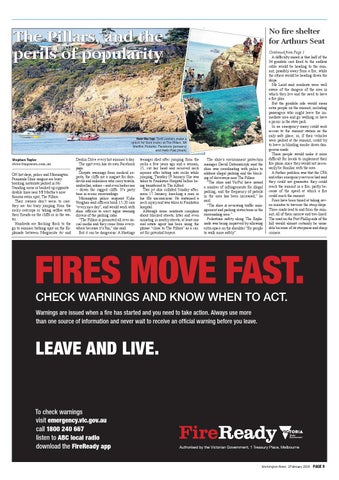 No fire shelter for Arthurs Seat

The Pillars, and the perils of popularity

Over the top: Thrill seekers make a splash for their mates at The Pillars, Mt Martha. Pictures: Facebook (jumpers) and Keith Platt (main)

Stephen Taylor steve@mpnews.com.au ON hot days, police and Mornington Peninsula Shire rangers are busy booking motorists parked in No Standing areas or banked up opposite double lines near Mt Martha’s now famous swim spot, The Pillars. Their owners don’t seem to care: they are too busy jumping from the rocky outcrops or taking selfies with their friends on the cliffs or in the water. Hundreds are flocking flock to the go to summer bathing spot on the Esplanade between Marguerita Av and

Deakin Drive every hot summer’s day. The spot even has its own Facebook page. Despite warnings from medical experts, the cliffs are a magnet for daredevils and onlookers who carry towels, umbrellas, eskies – and even barbecues – down the rugged cliffs. It’s party time in scenic surroundings. Mornington police sergeant Kylie Vaughan said officers book 15-20 cars “every nice day”, and would work with shire officers to erect signs warning drivers of the parking risks. “The Pillars is promoted all over social media and they come from everywhere because it’s fun,” she said. But it can be dangerous: A Hastings

teenager died after jumping from the rocks a few years ago and a woman, 25, cut her head and received neck injuries after hitting into rocks while jumping, Tuesday 19 January. She was taken to Frankston Hospital before being transferred to The Alfred. Two jet skis collided Sunday afternoon 17 January, knocking a man in his 30s unconscious. He sustained a neck injury and was taken to Frankston hospital. Although some residents complain about blocked streets, litter and even urinating in nearby streets, at least one real estate agent has been using the phrase “close to The Pillars” as a carrot for potential buyers.

The shire’s environment protection manager David Dobroszczyk said the shire was coordinating with police to address illegal parking and the blocking of driveways near The Pillars. “The shire and VicPol have issued a number of infringements for illegal parking, and the frequency of patrols in the area has been increased,” he said. “The shire is reviewing traffic management and parking restrictions in the surrounding area.” Pedestrian safety along The Esplanade was being improved by allowing extra space on the shoulder “for people to walk more safely”.

Continued from Page 1 A difficulty raised is that half of the 34 gondola cars fixed to the endless cable would be heading to the summit, possibly away from a fire, while the others would be heading down the slope. Ms Laird said residents were well aware of the dangers of the area in which they live and the need to have a fire plan. But the gondola ride would mean extra people on the summit, including passengers who might leave the immediate area and go walking or have a picnic in the state park. In an emergency many could seek access to the summit station as the only safe place, or, if their vehicles were parked at the summit, could try to leave in blinding smoke down dangerous roads. These people would make it more difficult for locals to implement their fire plans, since they would not necessarily be familiar with the area. A further problem was that the CFA and other emergency services had said they could not guarantee they could reach the summit in a fire, partly because of the speed at which a fire could reach the summit. Fires have been timed at taking seven minutes to traverse the steep slope. Three roads lead to and from the summit, all of them narrow and tree-lined. The road on the Port Phillip side of the hill would almost certainly be unusable because of its steepness and sharp corners.

FIRES MOVE FAST. CHECK WARNINGS AND KNOW WHEN TO ACT. Warnings are issued when a fire has started and you need to take action. Always use more than one source of information and never wait to receive an official warning before you leave.