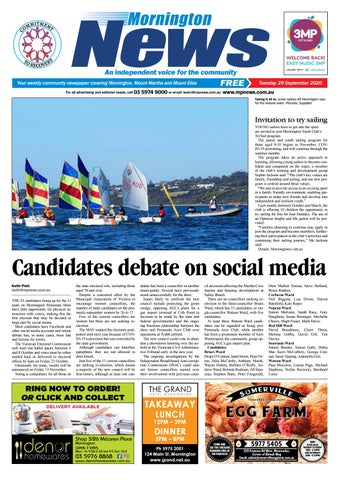 Mornington An independent voice for the community Your weekly community newspaper covering Mornington, Mount Martha and Mount Eliza For all advertising and editorial needs, call 03

5974 9000 or email: team@mpnews.com.au www.mpnews.com.au Taking it all in: Junior sailors off Mornington race for the inshore mark. Pictures: Supplied

Invitation to try sailing YOUNG sailors keen to get into the sport are invited to join Mornington Yacht Club’s TrySail program. The junior and youth sailing program for those aged 8-10 begins in November, COVID-19 permitting, and will continue through the summer months. The program takes an active approach to learning, allowing young sailors to become confident and competent on the water, a member of the club’s training and development group Sophie Jackson said. “The club’s key values are family, friendship and sailing, and our new program is centred around these values. “We aim to provide access to an exciting sport in a family friendly environment, enabling participants to make new friends and develop into independent and resilient youth.” Each month, between October and March, the club is offering 10 children the opportunity to try sailing for free for four Sundays. The use of an Optimist dinghy and life jacket will be provided. “Families choosing to continue may apply to join the program and become members, furthering their participation in the club’s activities and continuing their sailing journey,” Ms Jackson said. Details: Morningtonyc.net.au

Candidates debate on social media Keith Platt keith@mpnews.com.au THE 43 candidates lining up for the 11 seats on Mornington Peninsula Shire have little opportunity for physical interaction with voters, making this the first election that may be decided in large part by social media. Most candidates have Facebook and other social media accounts and online debate has, in some cases, been fast and furious for weeks. The Victorian Electoral Commission will mail out ballot packs between 6 and 8 October and votes must be either mailed back or delivered to electoral offices by 6pm on Friday 23 October. Ominously for some, results will be announced on Friday 13 November. Voting is compulsory for all those on

the state electoral role, including those aged 70 and over. Despite a concerted effort by the Municipal Association of Victoria to encourage women councillors, the number of male candidates on the peninsula outnumber women by 26 to 17. Five of the current councillors are women but three are not seeking reelection. The MAV wanted the elections postponed until next year because of COVID-19 restrictions but was overruled by the state government. Although candidates can letterbox pamphlets, they are not allowed to door knock. Just five of the 11 current councillors are seeking re-election, which means a majority of the new council will be first-timers, although at least one can-

RING NOW TO ORDER! OR CLICK AND COLLECT DELIVERY AVAILABLE

didate has been a councillor in another municipality. Several have previously stood unsuccessfully for the shire. Issues likely to confront the new council include protecting the green wedge, opposing AGL’s plans for a gas import terminal at Crib Point (a decision to be made by the state and federal governments) and the ongoing fractious relationship between the shire and Peninsula Aero Club over operations at Tyabb airfield. The new council could vote to abandon a showdown looming over the airfield at the Victorian Civil Administrative Tribunal early in the new year. The ongoing investigations by the Independent Broad-based Anti-corruption Commission (IBAC) could also see former councillors named over their involvement with previous coun-