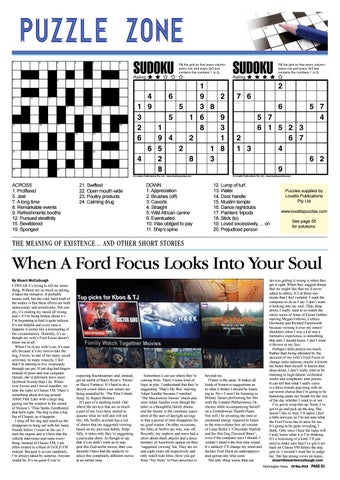 When A Ford Focus Looks Into Your Soul By Stuart McCullough I SWEAR it’s trying to tell me something. Without my so much as asking, it takes the initiative. It probably means well, but the cold, hard truth of the matter is that these efforts are both unnecessary and unwelcome. Put simply, it’s reading my mood all wrong and – if I’m being honest about it – I’m beginning to find it quite tedious. It’s not helpful and every time it happens it seems like a misreading of the circumstances. Honestly, it’s as though my wife’s Ford Focus doesn’t know me at all. When I’m in my wife’s car, it’s usually because it’s my turn to take the dog, Fozzie, to one of her many social activities. In many respects, I feel that I’m starting to live vicariously through our pet. If our dog had fingers instead of paws and was computer literate, she’d definitely have more facebook friends than I do. Whenever Fozzie and I travel together, we tune the radio to Classic FM. There’s something about driving around Albert Park Lake with a large dog gazing out the window to the sound of Strauss’s ‘Thus Spoke Zarathustra’ that feels right. The dog is also a big fan of Chopin, as it happens. I drop off the dog and watch as she disappears to hang out with her many friends before I return to the car. I start the engine and it’s here that the vehicle intervenes and ruins everything. Instead of Classic FM, I am often treated to a blast of GOLD FM instead. Because it occurs randomly, I’m always taken by surprise. Anyone would be. It’s no good if you’re

expecting Rachmaninov and, instead, get an earful of Barry Ryan’s ‘Eloise’ or Haysi Fantaysi. It’s hard to do a decent u-turn when your senses are being assaulted by ‘The Pina Colada Song’ by Rupert Holmes. It’s part of a startling trend. One where the devices that are so much a part of our lives have started to assume what we will and will not like. My Netflix account has a list of shows that are suggested viewing based on my previous habits. Helpfully, it states why they’re suggesting a particular show. As though to say that if you didn’t want us to suggest this God-awful movie, then you shouldn’t have had the audacity to select this completely different movie at an earlier time.

Sometimes I can see where they’re coming from. There’s some kind of logic at play. I understand that they’re suggesting ‘That’s My Boy’ starring Adam Sandler because I watched ‘The Meyerowitz Stories’ which also stars Adam Sandler even though the latter is a thoughtful family drama and the former is the cinematic equivalent of the start of daylight savings in that a period of time disappears for no good reason. On other occasions, the folks at Netflix are way, way off. Recently, my nephew and niece had a show about shark attacks and a documentary of Auschwitz appear on their ‘suggested viewing’ list. They are six and eight years old respectively and only watch kids films. How you get from ‘Toy Story’ to Nazi atrocities is

beyond me. ITunes is the same. It makes all kinds of bizarre-o suggestions as to what it thinks I should be listening to. No – I won’t be listening to Britney Spears performing her hits with the London Philharmonic Orchestra while accompanying herself on a Zimbabwean Thumb-Piano. Nor will I be investing the time or emotional energy required to listen to the nine-volume box set version of Limp Bizkit’s ‘Chocolate Starfish and the Hot Dog Flavored Water’, even if the computer says I should. I couldn’t stand it the first time round. It’s unlikely I’ll change my mind and declare Fred Durst an underappreciated genius any time soon. The only thing worse than our

devices getting it wrong is when they get it right. When they suggest things that we might like that we’d never admit to others. It’s at those moments that I feel violated. I want the computer to do as I say. I don’t want it looking into my soul. That, deep down, I really want to re-watch the entire series of Anne of Green Gables starring Megan Follows, Colleen Dewhurst and Richard Farnsworth because viewing it over my sisters’ shoulders when I was a kid was a formative experience, is something that only I should know. I don’t want it thrown in my face. Perhaps I doth protest too much. Rather than being offended by the decision of my wife’s Ford Focus to change radio stations, maybe it knows me better than myself. It knows that, deep-down, I don’t really want to be listening to high-falutin’ orchestral works and symphonic tone poems. It can tell that what I really crave is a three minute pop-song with an ear-worm chorus that I’m going to be humming under my breath for the rest of the day whether I want to or not. I’ve got to wrap this up. Soon, I’ve got to go and pick up the dog. She doesn’t like to wait. I’ll admit I feel a little nervous, as I’m not sure what the Ford Focus has in store for me. It’s going to be quite revealing, I think. Only once I hear the radio will I truly know what it is I’m thinking. It’s a reckoning of a kind. I’ll just need to make sure that I’ve got it set back on Classic FM before the dog gets in. I wouldn’t want her to judge me. She has strong views on music. stuart@stuartmccullough.com Mornington News