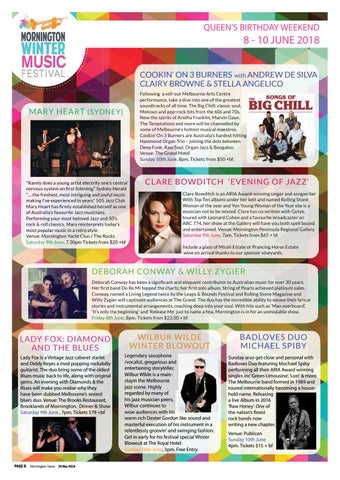 8 - 10 JUNE 2018 COOKIN’ ON 3 BURNERS with ANDREW DE SILVA CLAIRY BROWNE & STELLA ANGELICO Following a sell-out Melbourne Arts Centre performance, take a dive into one of the greatest soundtracks of all time. The Big Chill: classic soul, Motown and pop-rock hits from the 60s and 70s. Now the spirits of Aretha Franklin, Marvin Gaye, The Temptations and more will be channelled by some of Melbourne’s hottest musical maestros. Cookin’ On 3 Burners are Australia’s hardest hitting Hammond Organ Trio – joining the dots between Deep Funk, Raw Soul, Organ Jazz & Boogaloo. Venue: The Grand Hotel Sunday 10th June, 8pm, Tickets from $50 +bf.

CLARE BOWDITCH ‘EVENING OF JAZZ’ Clare Bowditch is an ARIA Award-winning singer and songwriter With Top Ten albums under her belt and named Rolling Stone Woman of the year and Yen Young Woman of the Year she is a musician not to be missed. Clare has co-written with Gotye, toured with Leonard Cohen and a favourite broadcaster on ABC 774, her show at the Gallery will have you both spell bound and entertained. Venue: Mornington Peninsula Regional Gallery Saturday 9th June, 7pm, Tickets from $65 + bf. Include a glass of Miceli Estate or Prancing Horse Estate wine on arrival thanks to our sponsor vineyards.

DEBORAH CONWAY & WILLY ZYGIER Deborah Conway has been a signiﬁcant and eloquent contributor to Australian music for over 30 years. Her ﬁrst band Do Re Mi topped the charts; her ﬁrst solo album, String of Pearls achieved platinum sales. Conway, named a Living Legend twice by the Leaps & Bounds Festival and Rolling Stone Magazine and Willy Zygier will captivate audiences at The Grand. The duo has the incredible ability to weave their lyrical stories and instrumental arrangements, reaching deep into your soul. With hits such as ‘Man overboard’, ‘It’s only the beginning’ and ‘Release Me’ just to name a few, Mornington is in for an unmissable show. Friday 8th June, 8pm, Tickets from $23.50 + bf.

LADY FOX: DIAMOND AND THE BLUES

Lady Fox is a Vintage Jazz caberet starlet and Diddy Reyes a mod popping rockabilly guitarist. The duo bring some of the oldest Blues music back to life, along with original gems. An evening with Diamonds & the Blues will make you realise why they have been dubbed Melbourne’s sexiest blues duo. Venue: The Brooks Restaurant, Brooklands of Mornington. Dinner & Show Saturday 9th June , 7pm, Tickets $79 +bf

Legendary saxophone /vocalist, gregarious and entertaining storyteller, Wilbur Wilde is a mainstayin the Melbourne jazz scene. Highly regarded by many of his jazz musician peers, Wilbur continues to wow audiences with his warm rich Dexter Gordon like sound and masterful execution of his instrument in a relentlessly groovin' and swinging fashion. Get in early for his festival special Winter Blowout at The Royal Hotel Sunday 10th June, 3pm. Free Entry.